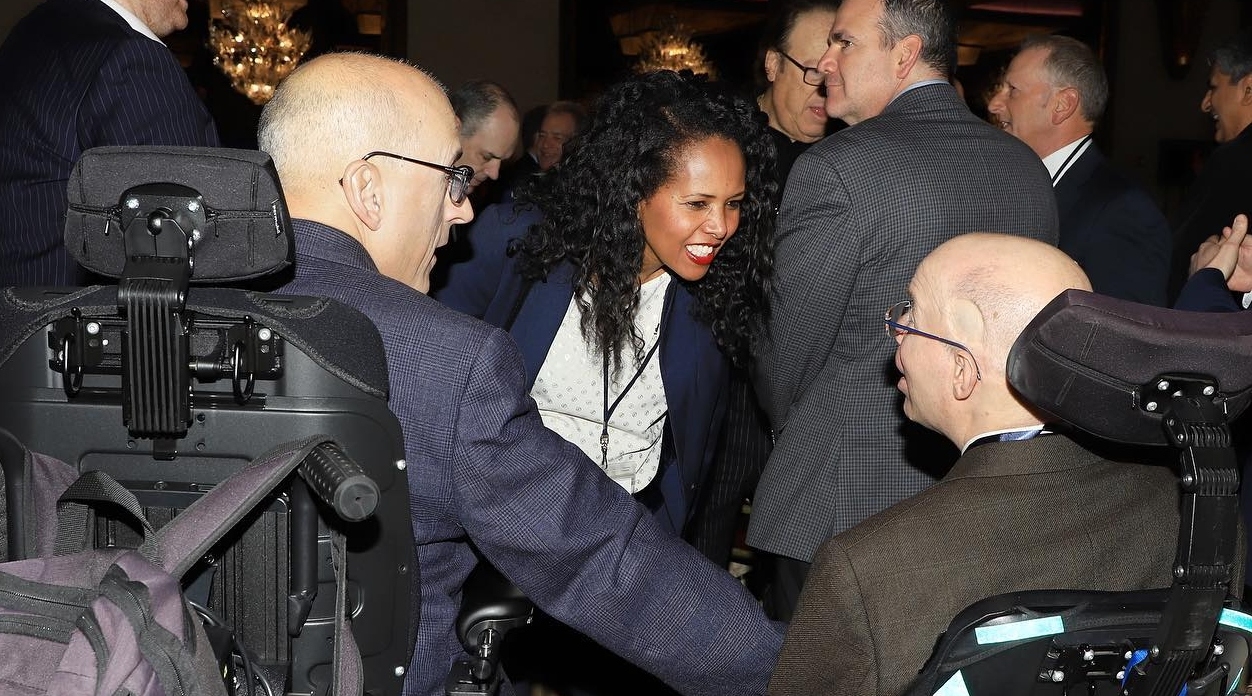 (JTA) — Last Friday, as George Santos completed his second week in Congress, Mazi Melesa Pilip was contemplating the relief Shabbat would bring — and also the sting of the betrayal she felt by her fellow Long Island lawmaker.

Among the welter of falsehoods that Santos scattered throughout  the byways of the Great Neck area in northern Long Island he and Pilip both represent — Santos in Congress, Pilip as a Nassau County legislator — Santos has pitched himself as a Jewish and Black Republican who overcame hardship to earn multiple degrees.

All lies, but as it happens those descriptors apply to Pilip, an Ethiopian Jew who won’t count out a run for Congress if Santos ever accedes to demands, including from fellow Republicans, to resign. (Santos says he intends to serve out his two-year term.)

“I’m not going to lie to you, people are definitely asking me to run,” she told the Jewish Telegraphic Agency in an interview as she drove while shopping for Shabbat. “That doesn’t mean nothing.”

Pilip said her journey into American politics was propelled by her experience advocating for fellow Ethiopian immigrants in Israel — where she moved as a child through the Operation Solomon airlift and lived until marrying her American husband — and by her children’s experience with antisemitism in their Long Island schools.

“I am a strong believer, if you see something’s not working well for your community, or for yourself, you have to be involved,” she said. “You can’t just complain from outside.”

A Politico reporter, Olivia Beavers, reported on Twitter last week that Pilip was one of two Republicans the Nassau County Party is considering running should Santos step down. (The other is Jack Martins, a state senator; both he and Pilip ousted Democrats in a recent Republican sweep of Nassau County.)

Right now, Pilip said, she is focusing on serving her constituents through the Nassau County legislature. Any decision about replacing Santos, she said, is up to Joseph Cairo, the GOP chairman in Nassau County.

“The only person who can make a decision on who’s going to run will be the chairman,” Pilip said. “Time will show — it’s too early to say anything to be honest. I will continue to serve my residents and I love serving the people. I want to be a voice for the people, and anything I can do to help more people, I will definitely consider it.”

Cairo has not said yet who he would like to run to replace Santos, but two things are clear: He wants Santos to go, and he likes Pilip, a lot.

Cairo convened a press conference last week of leading Nassau County Republicans calling on Santos to step down because of the multiple lies he told while running and because he faces multiple criminal investigations. In unrelenting reporting since last month, reporters have detailed how Santos lied about his education, his job experience, his charitable giving and his family background.

“Today, on behalf of the Nassau County Republican Committee, I’m calling for his immediate resignation,” Cairo said at the press conference.

Cairo had led an effort to diversify GOP candidates on the island, and a year ago, at Pilip’s swearing-in ceremony, he explained why: He was an Italian American whose parents favored Republican ideals but felt unwelcome in the GOP until they helped integrate it themselves, in New Jersey and then on Long Island. It had become his mission to bring more minority candidates into the fold, and he recruited several of them to run in the 2021 local elections.

Pedram Bal, a Persian Jew and the mayor of Great Neck, told Cairo he should look at Pilip, an Ethiopian-Jewish immigrant who was active in efforts to revitalize Great Neck, and who had been vice president of her synagogue, Kol Yisrael Achim. It was an easy sell, Cairo said, and it paid off.

“An Orthodox Jewish woman, a religious refugee from Ethiopia is elected as a Republican to the Nassau County legislature!” he marveled at the inauguration.

Of the many lies Santos has told about himself, the Nassau County Republicans at the press conference seemed especially offended by his claims of descent from Holocaust survivors.

“For him to make up this story, that his parents were Holocaust survivors is beyond the pale. It is simply tragic and outrageous, and disgusting,” said Bruce Blakeman, the Nassau County executive who is the first Jew elected to the position. “He is a stain on the House of Representatives. He’s a stain on the Third Congressional District.” 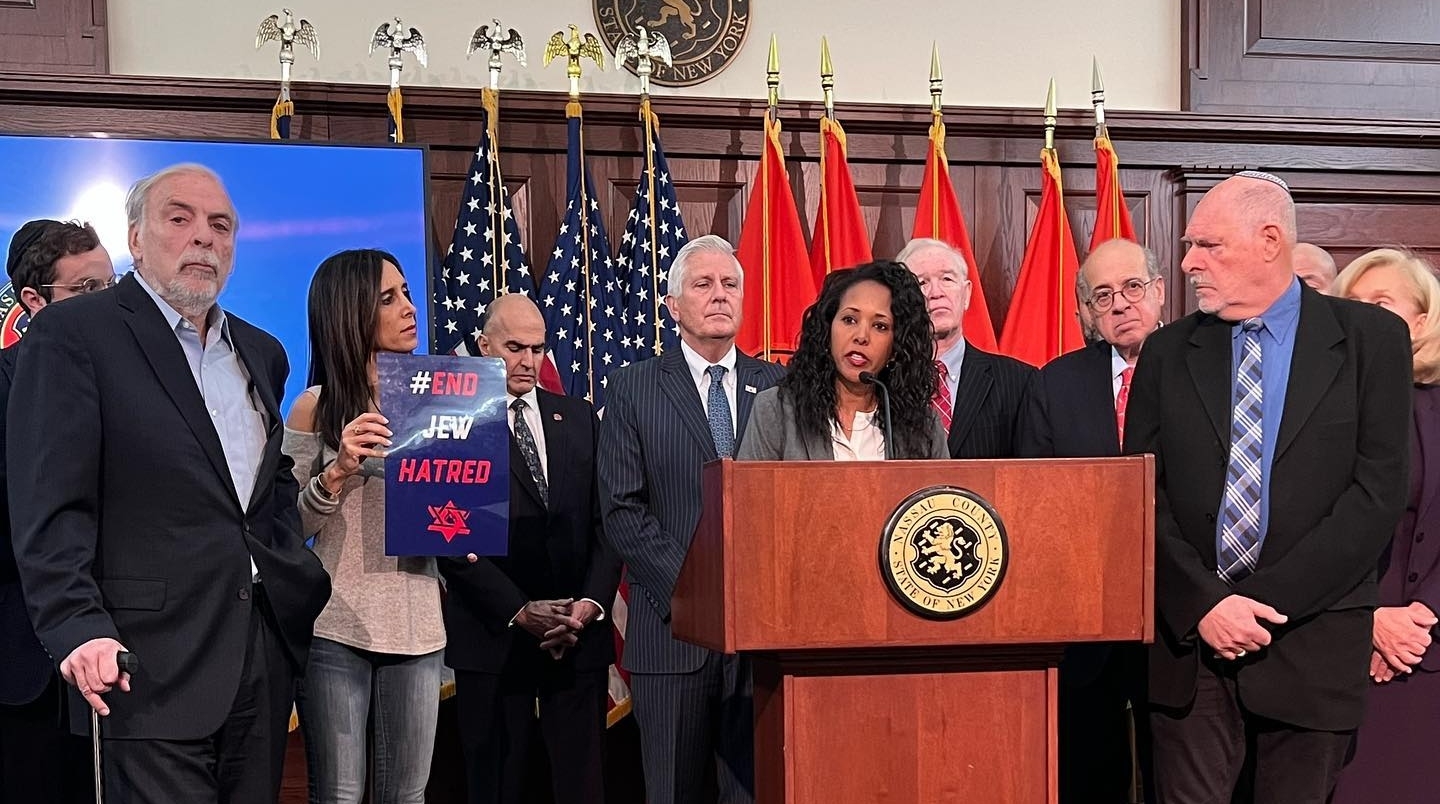 Pilip calls for the prosecution of the alleged assailant in the violent attack on a Jewish New Yorker in 2021, at a press conference, in Mineola, N.Y., Jan. 29, 2023. (Office of Mazi Melesa Pilip)

Jewish Republicans have been at pains to call on Santos to quit: The Republican Jewish Coalition said he will not be welcome at its events. With much fanfare, the RJC had presented Santos and Max Miller, a freshman Republican from Ohio, as the next generation of Republican Jewish leaders at its annual conference in Las Vegas in November. Miller last week also called on Santos to resign, saying in a statement that Santos sought to “benefit from the murder of millions of Jewish people.”

When Pilip spoke at the press conference, she did not address his lies about his heritage. “I’m also paying for the lies told by Congressman George Santos,” she said. “People trusted him, people campaigned for him, including me, as a county legislator. At this point, the trust is no longer there. Therefore, he should resign.”

In her interview with the Jewish Telegraphic Agency, Pilip said she found the fact of Santos’s compulsive lying more offensive than the lies themselves, including about his heritage. She had put her reputation on the line campaigning for him last year.

“I trusted him and I told people to vote for him. I campaigned with him. And so when you do something like this, and then keep every day there’s something new coming about him,” she said. “It’s making you feel uncomfortable because people asking, you know, what’s, what’s going on, Mazi, what happened with this guy?”

Pilip campaigning for the legislative seat in 2021 had bonded with her constituents. Speaking to local media she described how much she enjoyed the hustle of campaigning.

“I was going from synagogue to synagogue, bringing out the vote,” she told Five Towns Jewish Home last year.

“Sometimes I would leave Friday night to go to a shul and I would sleep at someone’s house on Friday night because I’m shomer Shabbat and I couldn’t walk back home,” she told the local magazine for Orthodox Jews. “And then I would go to another synagogue the next day, on Shabbat, to spend time there and talk to people. Only when Shabbat was over would I go home. I did this for two months. It was intense but it was worth it. I met a lot of people. I would go to train stations and park events — any event, large or small, I was there.”

She became a local celebrity, giving birth to twin daughters — her sixth and seventh children — just weeks before the election.

Pilip, 43, said in her interview with JTA that her involvement in politics was almost inevitable, after she had migrated to Israel on Operation Solomon, the 1991 airlift, when she was 12.

“I have always been very active, even as a child in Israel,” advocating for the opportunities she saw that Israelis just a few years older than her were enjoying. Over her father’s objections, she enlisted in the paratroop division of the Israel Defense Forces (she says he is now proud of her service). While at university, she led the Ethiopian Student Union for two years. She has a degree in occupational therapy from the University of Haifa and a degree in diplomacy and security from Tel Aviv University.

“I was a voice of so many young kids who wanted equal opportunity and really my main focus was especially education, because I do believe through education, you can achieve a lot and you can integrate into the society,” she said. “So we were encouraging younger-generation [Ethiopian immigrants] my age to go to higher education. Because we came, you know, from nothing, and we came without any education.”

She met her husband, an American medical student at the Technion, while she was at the University of Haifa. They moved to the United States, where she became active speaking about Israel for Jewish federations and other Jewish groups. Her Instagram handle couples the U.S. and Israeli flags. Her husband, Adalbert, who was born in Ukraine, and whose mother is the child of Holocaust survivors, was especially offended by Santos’s Holocaust lies, Pilip said.

“Why would you use this painful history and create something like this and tell people that his grandparents survived just for the political benefit of it?” she said.

Pilip said her political interests were revived two years ago when her oldest son was preparing for bar mitzvah and he told her about antisemitic comments he endured from a classmate in the Great Neck Public Schools system. “He said, ‘Mom, you know, this child told me, I wish Hitler would kill you all,’” she recalled. She said that perhaps the child had been bullied, and was acting out against others, but it rattled her that he was resorting to antisemitism. “That a 12-year-old child would talk like this? It’s bad.”

So when Bal, the Great Neck mayor, approached her about running for elected office, she was game.

She campaigned on reviving Great Neck’s downtown, but also acting as a bridge in troubled times among the multiple minority communities in the area.

“Promoting understanding, education of cultures, religions and systemic hate has to be addressed from our young people on up,” she said in a candidate’s statement before her election.

Last Friday, however, she was looking forward to a little respite from the Santos follies.

“I’m going to pick up a couple of things from the grocery,” she said “I have to cook for my kids for Shabbat. Shabbat is starting early. So I think I’ll just spend time with my family, my kids. Just a very relaxing time.”