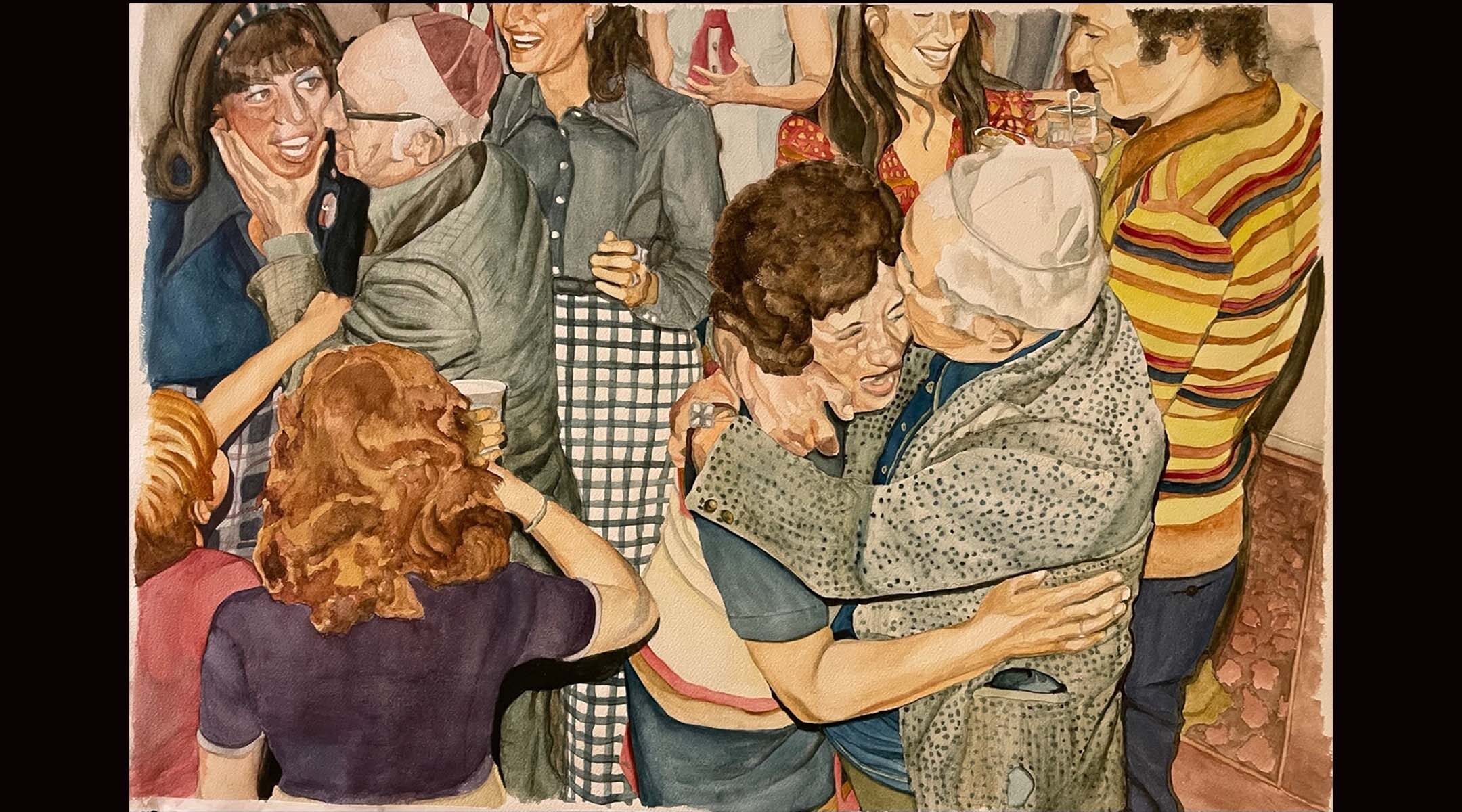 (JTA) — Like many of us left without plans during the initial COVID-19 lockdown in 2020, Lisa Edelstein spent some of her time rummaging through old family photographs. But instead of just basking in the nostalgia, she was also on the lookout for her next painting project.

Since then, the actress, known for her often Jewish roles on several hit TV shows — from “House” to “Girlfriends’ Guide to Divorce” to “The West Wing” to “The Kominsky Method” — has been producing paintings that recreate old photos of her Jewish family. She is showing them at her first solo art exhibition, titled “Family,” at the SFA Advisory art gallery in downtown Manhattan through Jan. 25.

“I don’t think there is any way around my Jewishness being a part of what I do or make, whether or not I intend to make it a part of it,” says Edelstein. “Almost every role I get turns Jewish if it lasts long enough. I don’t think of myself as so obviously a Jew, but my name definitely gives it away and I don’t mind.”

Her Jewish identity comes through in her paintings, too. Like the photos they are modeled after, they capture family members in candid moments, often at group events. There are works of men in yarmulkes kissing family members on the cheek at a celebration, of a woman mid-phone call, of kids and adults stuffing their faces at a pizza parlor.

“What I’m looking for are those images that tell a more honest story, a caught moment, an odd angle, an awkward pose,” Edelstein said. “We don’t have images like that anymore, the world is too camera savvy and our phones are so high tech that we can just delete things that tell stories we’d like to forget or filter them into something else. Back when we took pictures on film, each photo took time, effort, and money to produce, so even if we hated it, we tended to keep it, at least in a box somewhere. Those are the ones I’m looking for.”

Edelstein, 56, grew up in Wayne, New Jersey, in a Conservative Jewish household observing all the holidays and Shabbat.

“Though I was raised with a healthy Jewish identity, it wasn’t without embarrassment and apologetics,” she said. It didn’t help that the local head of the school board, who later became mayor, published an article in a local paper telling people not to vote for the Jews for the school board because they would cancel Christmas. 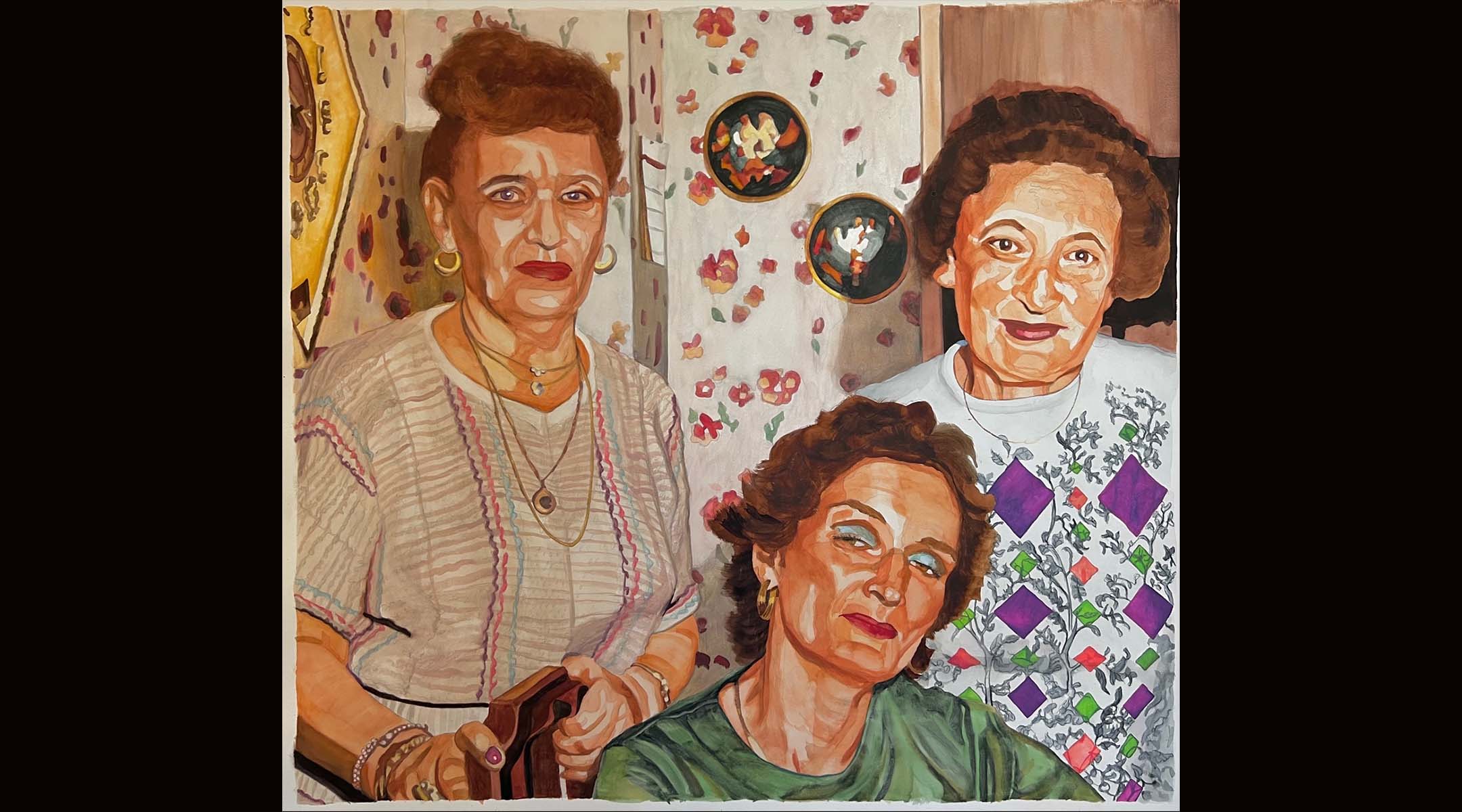 “Matriarchs of Brooklyn,” by Lisa Edelstein. (Courtesy of SFA Advisory)

“The way people talk about Jewish women in particular, with for example the word JAP [a derogatory term used to describe young Jewish women], is really disgusting. On some level, I think there was a feeling that I needed to dissociate myself with that identity in order to not be that thing that people associated with that identity,” she said.

She did consider changing her name when she moved to Los Angeles in 1991, thinking it could help her career. But she said it would have taken away from any feeling of true success. It was letting Hitler win, she said. 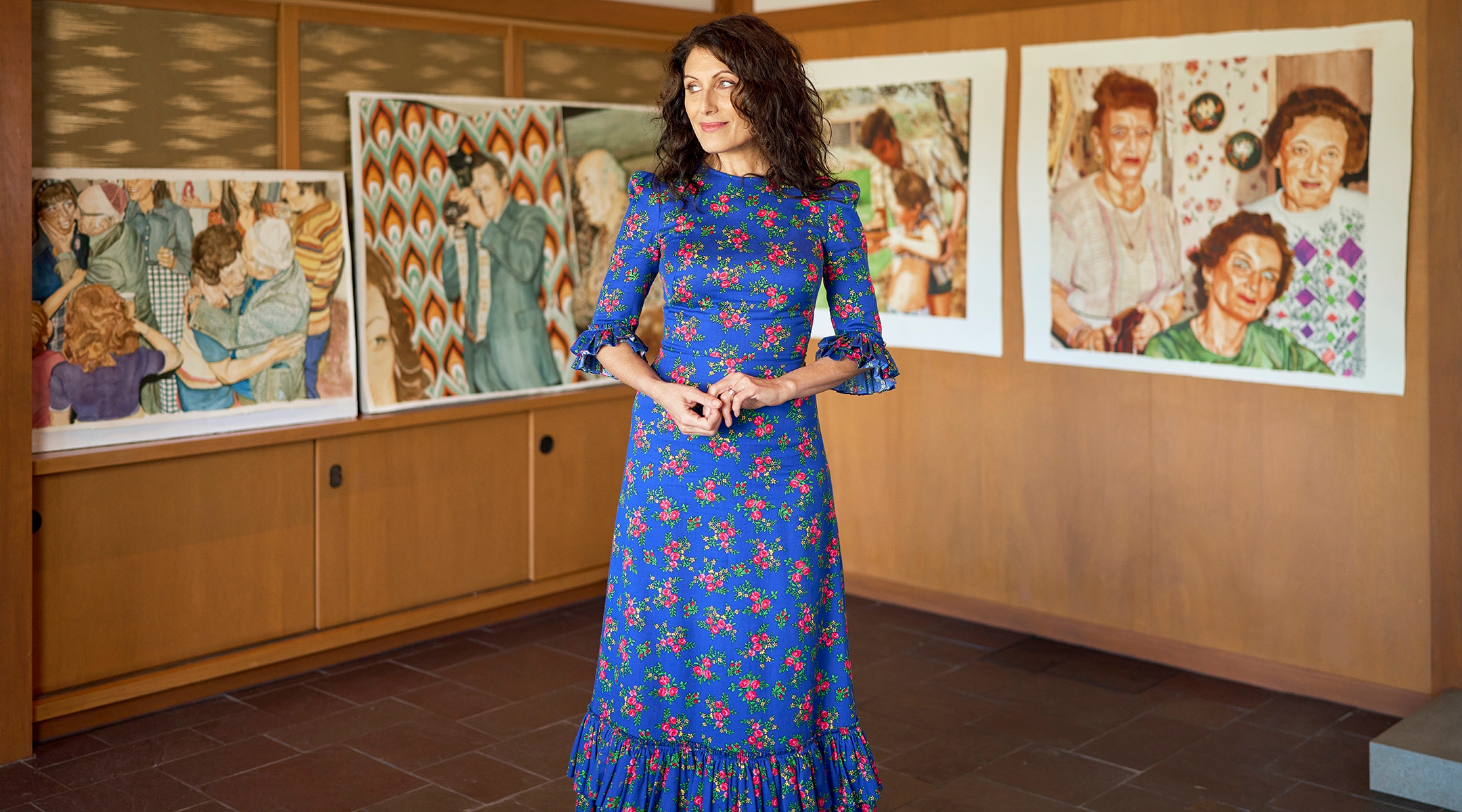 Lisa Edelstein, shown in a studio with some of her works, is known for playing Jewish characters on TV. (Holland Clement)

She has since dealt with antisemitism in her career, from being lumped into a non-specific “ethnic” category at the start of her career, to not getting a job because they already had a Jewish actor — and two Jews were considered one Jew too many.

A few years ago, Edelstein posted an old photo of herself with her mother and two siblings on Instagram for her mother’s birthday, and it happened to be in front of the Western Wall in Jerusalem. She got death threats in public comments, which she deleted, on the post.

“And lately, just painting a yarmulke feels like a radical move, never mind painting an El Al logo or even just Jewish faces. It’s suddenly daring to just be publicly Jewish,” she said. 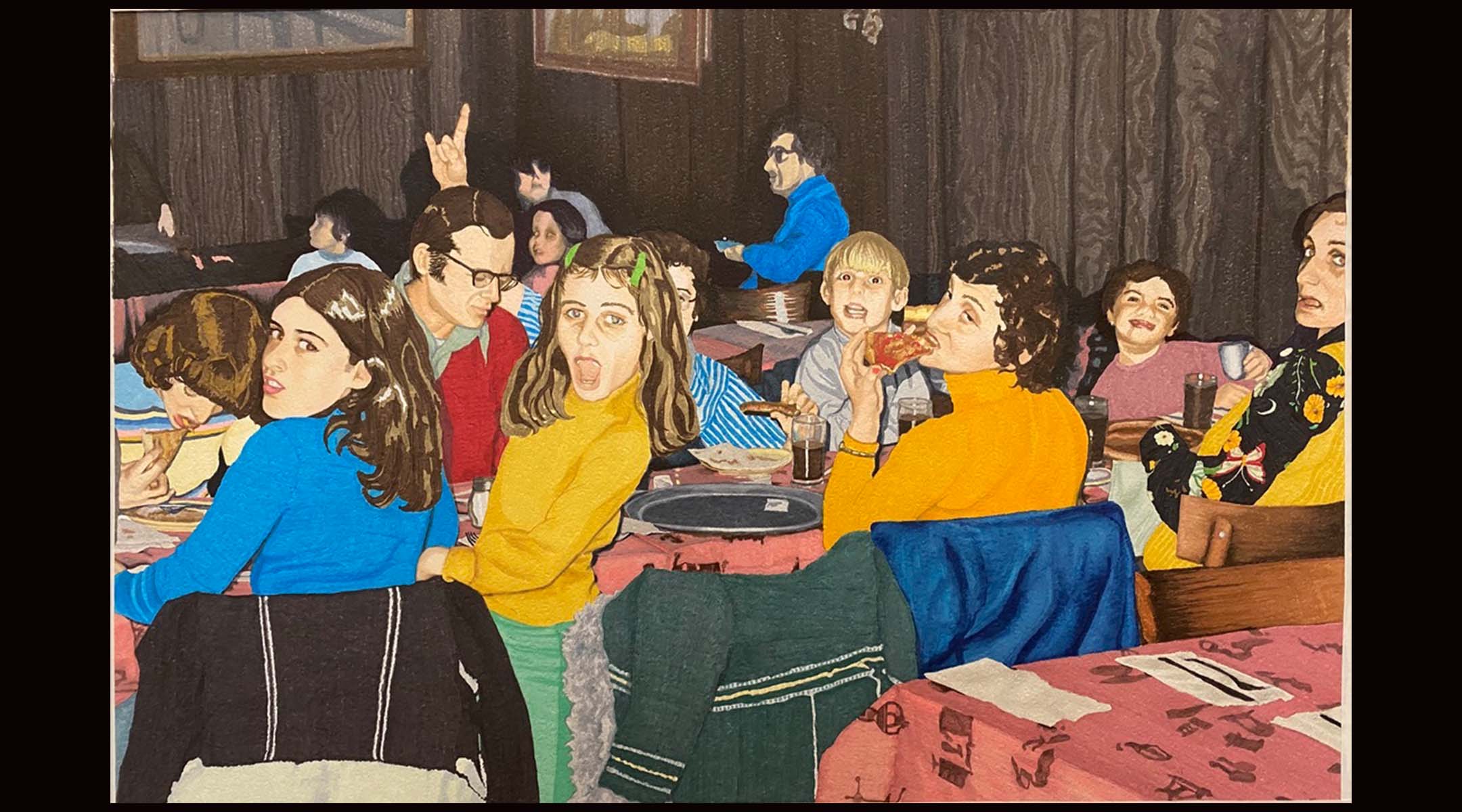 But she wasn’t afraid to put Jewish-themed art on display. She was more nervous about the entire project in the first place.

“Actresses are a breed that people love and they also love to hate, so you just don’t know what the public response is going to be. But I felt very supported within the art community, at least the one I’m in,” she said. 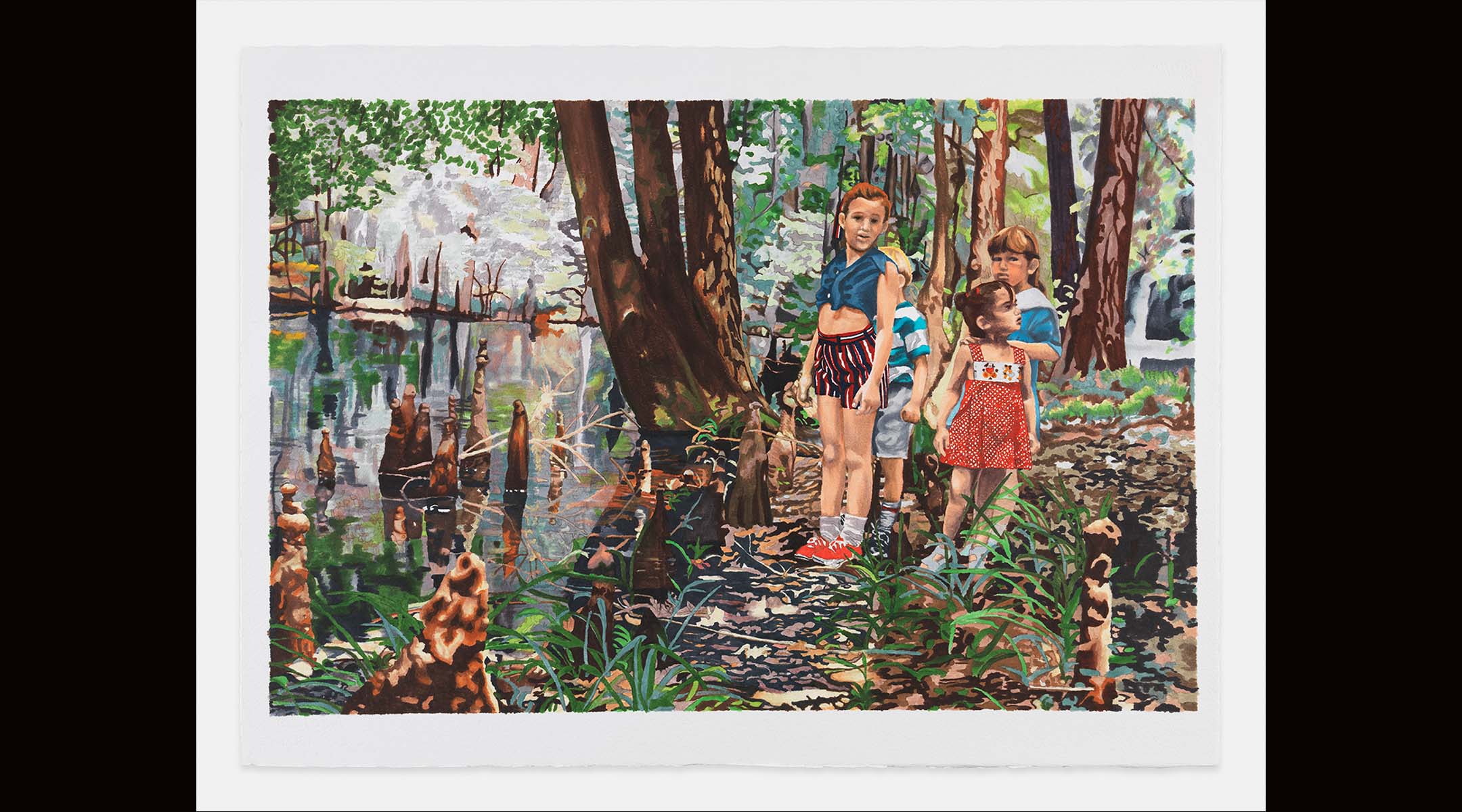 Edelstein enjoyed drawing as a child and teen, but she didn’t continue with it after high school. It wasn’t until pandemic lockdown that she returned seriously to the art form. It started with buying adult coloring books to fill the time, but she didn’t like the images in them and decided to make her own. Her husband, Robert Russell, an artist himself, pushed her to do more, and the images got larger and larger, until she went from magic marker to watercolor.

Russell always encouraged her to make things — when they first started dating, he asked her to make him a drawing about a week into their relationship. Always a fan of using photography as a starting point for her work, she gave him a drawing of herself at four years old sitting on the beach holding a crab. (He had given her a painting of two doves on their second date.) 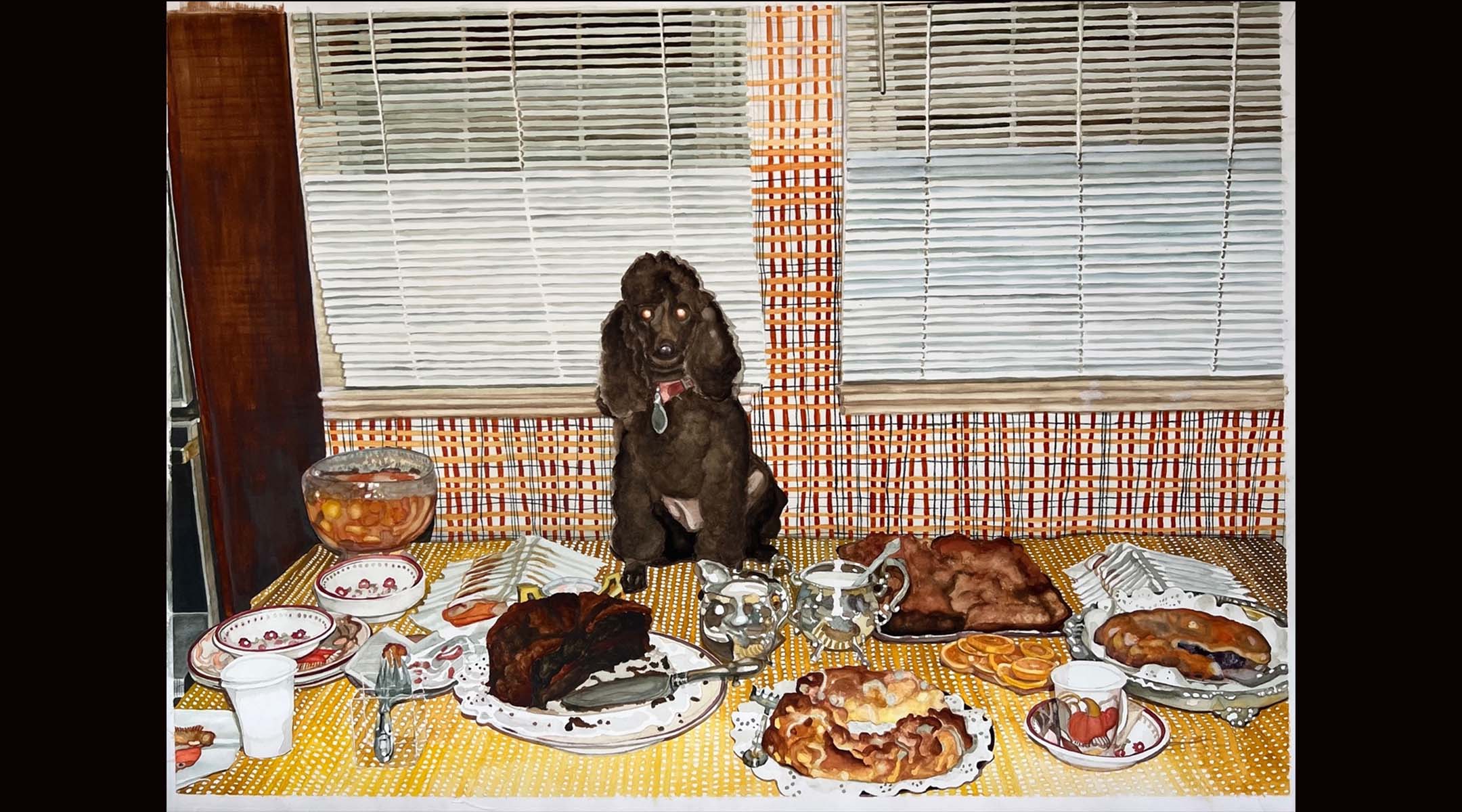 “Suddenly I realized I actually did have permission to do this stuff, not because he gave it to me, but because I always had,” Edelstein said.

She will continue to act, write and direct, but she wants to continue in her new career, too. Edelstein is toying with the idea of adding drawings to a Passover haggadah that she wrote for her family and updates every year. If she published the haggadah for public consumption, the drawings could turn the seder book into a coloring book of sorts for small children.

“I have a lot of energy, so I’m up for whatever,” she said. “And I think it’s important to view all of these things as one. They’re just different ways my body pushes out ideas. Each one feeds the other.”