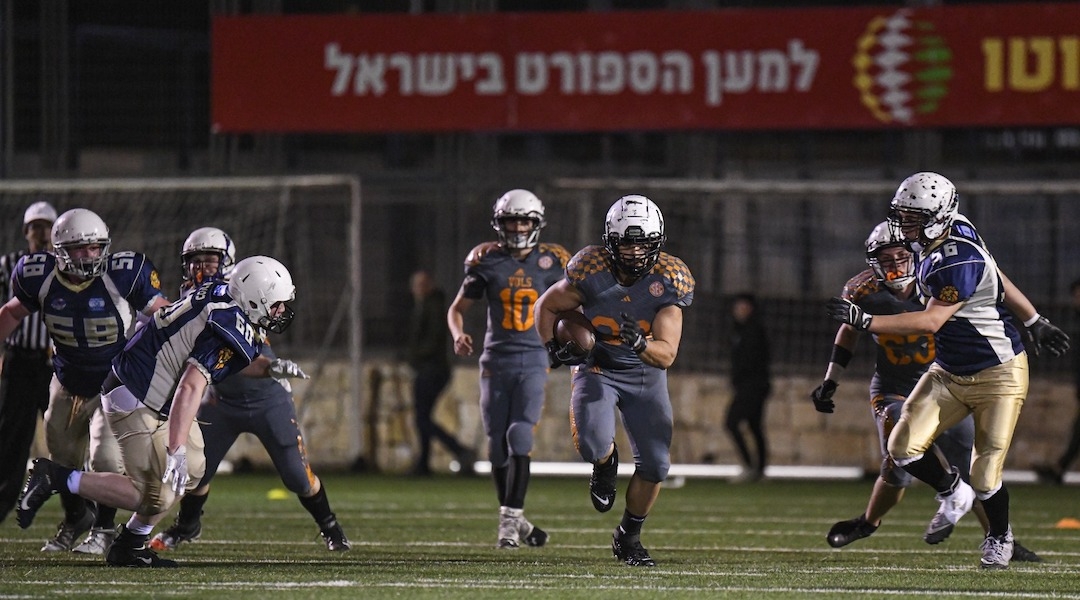 (JTA) — The year was 1999, and Jonathan Hauser was working as a concierge at the famous King David Hotel in Jerusalem.

At the time, Hauser was playing for the Jerusalem Lions flag football team, a part of the American Football in Israel organization. The league was 10 years old at the time but lacked adequate playing fields. One day, he spotted a face he knew from TV in the hotel lobby: New England Patriots owner Robert Kraft.

Hauser told Kraft about American Football in Israel (AFI) — which Kraft, despite being a regular Israel visitor, did not know existed — and connected him with Steve Leibowitz, a veteran journalist who moved to Israel in 1974 and had been leading the development of the sport in Israel.

Just a year later, Kraft inaugurated the small Kraft Family Stadium in Jerusalem, with a field only 80 yards long (instead of the regulation 100-yard length in the NFL). The AFI — which started with touch football and later expanded to flag football and adult tackle football — had found a field.

On Saturday night, the AFI kicks off its season in Bet Shemesh with a matchup between the Bet Shemesh Rebels and the Jerusalem Lions, in front of a sold-out crowd of 400. Around 2,000 players, coaches and referees are now involved in the league throughout the country. The adult tackle league features eight teams from different cities who compete in an eight-game regular season, followed by playoffs that culminate in the Israel Bowl championship game in the spring. Other programs for men, women and children of all ages are offered in cities across Israel.

“The dream of building football in the country is due to the partnership and friendship and help of Robert Kraft, without any question, and his family,” said Leibowitz, a New York City native and longtime Giants fan.

Leibowitz had the dream since the 1980s, when he and a group of journalists put together a sports club to watch American football by pirating the signal from the Armed Forces Network. That inspired them to start the league.

In 2017, Kraft donated $6 million to open the Kraft Family Sports Campus in Jerusalem, which Leibowitz said is home to the only regulation-size American football field in the Middle East, plus facilities for soccer, basketball and more.

“My late, darling wife Myra always used to tell me that until I start building football in Israel, I would not win anything with [the] Patriots,” Kraft said at the 2017 dedication. “That happened in late 1999, and we won our first Super Bowl in 2001. Now we have five championships, and I can’t ignore the connection between our continuing to support development in Israel and our great accomplishments.” 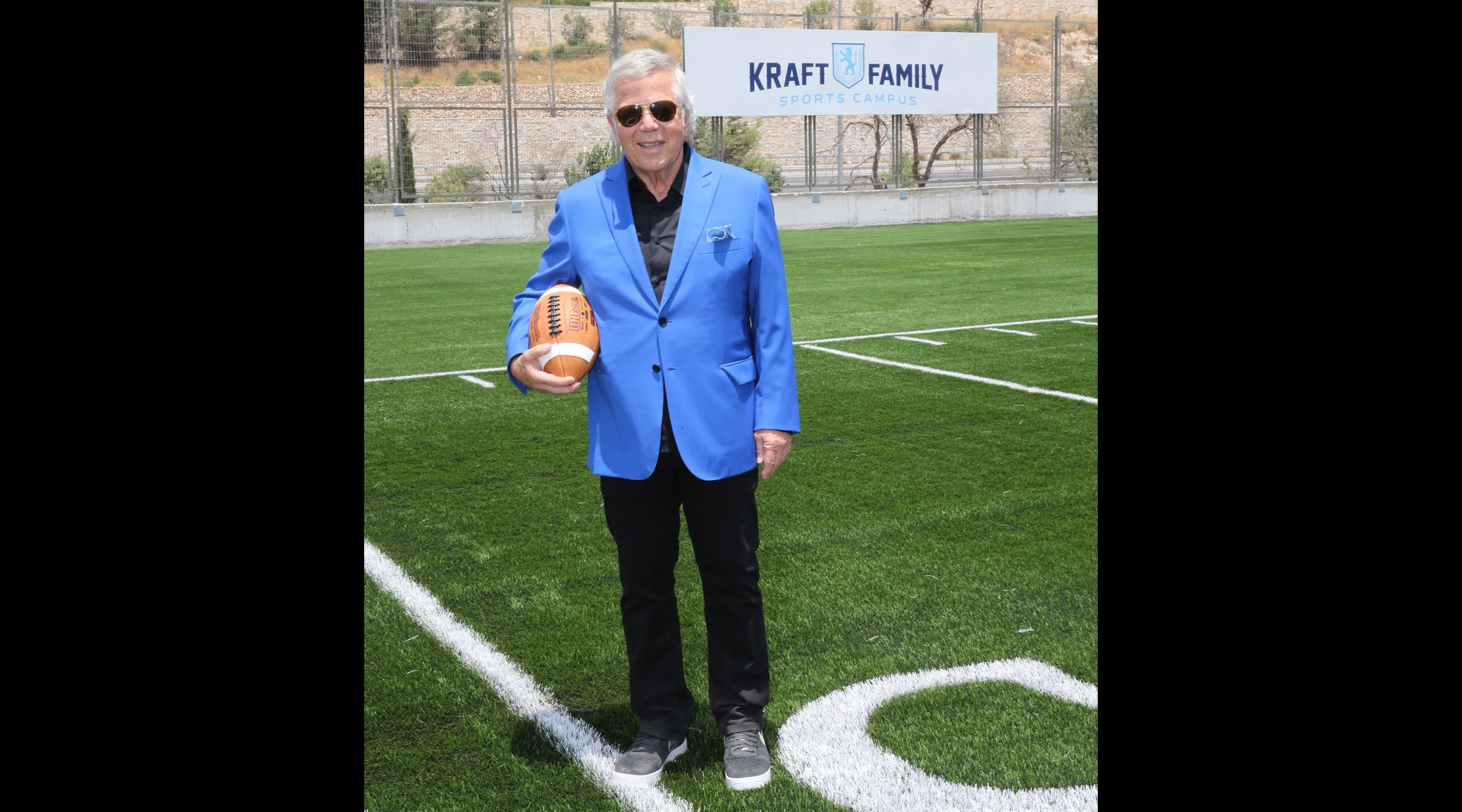 Players from AFI have gone on to play college ball in the United States, most notably Yonatan Marmour, who in 2021 became the first Israeli to play Division I football. Bet Shemesh coach Charlie Cohen, a yeshiva teacher and salesman who moved to Israel from Massachusetts in 2000, added that some athletes play in Israel during a gap year before trying to make the jump to Division II.

In the early years of football in Israel, Leibowitz said the players were mostly American immigrants or children of immigrants. But now, he says there is mostly “Hebrew in the huddle”: Nearly every team outside Jerusalem is entirely Hebrew-speaking. Some cities have Arab players, plus immigrants from Ethiopia and Russia.

Leibowitz, who serves as president of AFI, acknowledged that the sport will never surpass the popularity of soccer or basketball in Israel. But the strides the league has made are undeniable, and the AFI hopes to build three more football stadiums, with plans in motion for regulation-size fields in Haifa, outside Tel Aviv and in Beersheva.

In another sign of development on the world stage, Israel also hosted the 2019 European Flag Football Championship and the 2021 Flag Football World Championship. In July, Leibowitz said, the AFI has been invited to bring a national team of top players to play in Fez, Morocco. He said it’s the first time an Israeli team will play a Moroccan team in Morocco, likely in any sport.

And with the 2028 Olympics in the not-too-distant future, Leibowitz said the AFI is working on a squad that could qualify for the soon-to-be-announced flag football competition.

Leibowitz added that the league honors the late Myra Kraft, who was also very involved in the sport’s development, by stitching her initials onto the Israeli players’ jerseys when they play abroad.

For coach Charlie Cohen, football is at the center of his Jewish practice — and helped inspire him to become a rabbi.

“Without sports, there is no Jewish identity for me,” he told the Jewish Telegraphic Agency.

Cohen, 53, said he was kicked out of Hebrew school as a child and had all but walked away from his Judaism when he was coaching Pop Warner football in Sharon, Massachusetts. His winless team squared off against a powerhouse squad from nearby North Attleboro and won, 13-12.

“That was a really watershed moment for me,” Cohen said. “I took that to heart, as a person, and as a Jew.”

He explained: “Here it is, you’re a football coach, and you’re demanding that your team has character. Your team shows up for each other. If you have a loss, come fight for your guys, don’t quit… I said to myself, if I were to demand my little peewee football team turns it around, well, I’m going to turn it around, too.”

He reengaged with Judaism and ultimately immigrated to Israel, where he became a rabbi.

Cohen began as Bet Shemesh’s offensive line coach, then became head coach last season, leading the Rebels to the semifinals, where they lost by four points.

And no, Cohen is not over the loss: “We had the ball with two minutes to go. Should’ve called a timeout and calmed them down. You live and you learn.” 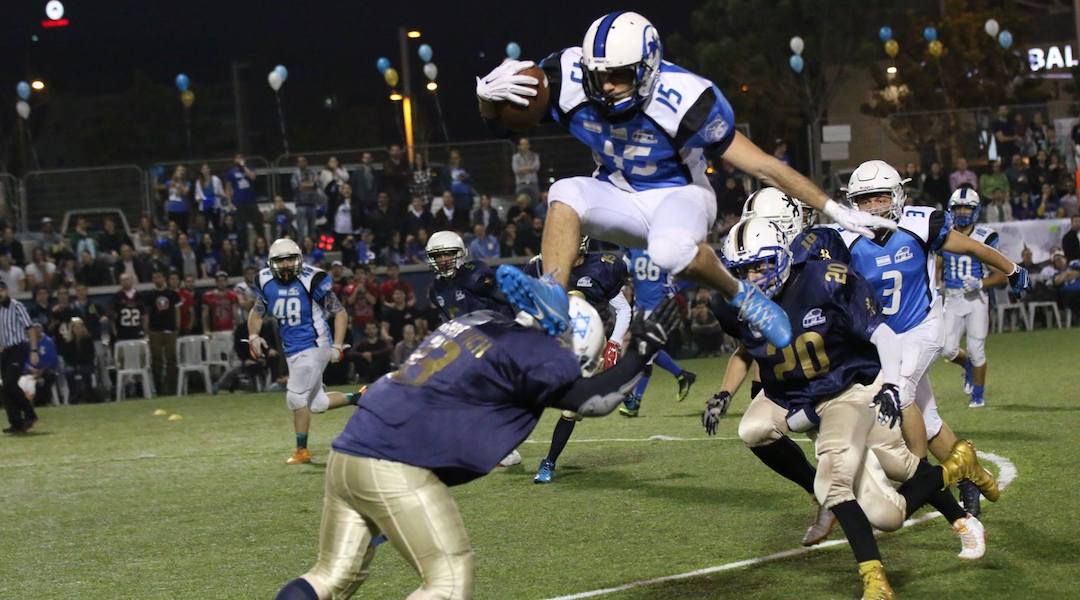 One of Cohen’s players is 22-year-old yeshiva student Aviad Ohayon, who said he tried football for the first time in high school in Kfar Saba, at the behest of a friend. He didn’t know what football was at the time.

“The information that I had about football was like a bunch of guys with helmets fighting with a strange ball, in the shape of an egg,” Ohayon told JTA, not inaccurately. “He really wanted me to come, so I was like, okay, why not? I came to one practice and you can say I fell in love with the sport.”

Ohayon — who plays running back, linebacker and kicker — said he has played basketball, soccer and karate in the past, but football was special.

“I really loved sports, but something with football, the training and all the practices, was very different to me,” he said. “The spirit, the brotherhood, everything was way more unique than I saw in the other sports.”

Leibowitz, now 71, calls himself the “grandfather” of the sport in Israel.

“The craziness was sticking with it all these years, for over 30 years, and making it into a life ambition to establish the sport in Israel, because I think it’s a good sport. I think it has a place in this country,” he said. “I think we’ve proven that. And together with that we’ve created a community. So at this point, I can’t even leave if I wanted to.”