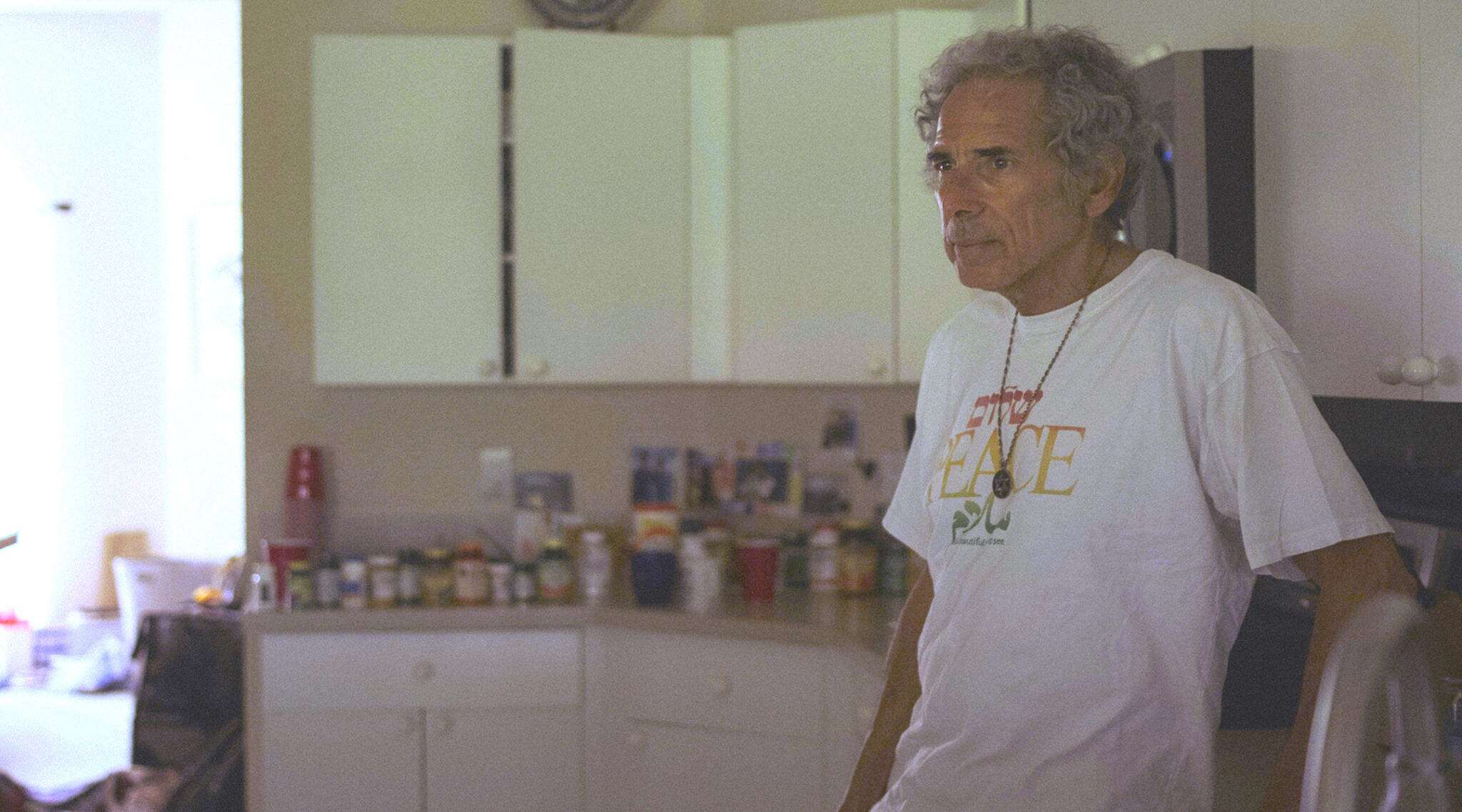 Rabbi Barry Silver, who is leading a lawsuit against Florida's anti-abortion law in the wake of the Dobbs decision, shown in the documentary "Under G-d." (Courtesy of "Under G-d")
Advertisement

(JTA) — Last summer, in the days after the Supreme Court’s reversal of Roe v. Wade, the landmark 1973 decision that protected the right to an abortion, Paula Eiselt was doing press work for her acclaimed documentary “Aftershock.”

The film — which documents how the American healthcare system disproportionately fails to keep women of color healthy during and after giving birth — kept her busy with interviews as it earned a wide audience on Hulu and in theaters. But Eiselt felt pulled into thinking about a project tied to the Court’s ruling in Dobbs v. Jackson Women’s Health Organization, which overturned Roe.

Staying true to her Jewish roots, Eiselt found a Jewish angle: the rabbis and Jewish organizations who are helping lead the charge in bringing lawsuits against the Dobbs decision.

“As a Jewish woman, a Jewish mother, to see that there are Jews, rabbis, organizations, standing up to these bans, to the Dobbs decision, and finding ways to flip the script on many of these laws was very inspiring,” said Eiselt, whose first film focused on an Orthodox female emergency responder service in Brooklyn.

Her new short documentary “Under G-d,” which premiered at the Sundance Film Festival on Sunday and plays there throughout the week, shows how Jewish people and institutions are using state laws called Religious Freedom Restoration Acts (RFRAs) — often used in the past by religious organizations on the opposite side of the abortion issue — to argue that Dobbs violates their religious freedom as American Jews. Traditional Jewish law permits (and even requires) abortion in some circumstances, particularly when the life or health of the pregnant person is at stake.

Among the first lawsuits aimed at Dobbs came from Congregation L’Dor Va-Dor in Boynton Beach, Florida. Its rabbi, Barry Silver, is a figure in Eiselt’s film, alongside Elly Cohen, an Indiana activist and mother who is part of the Hoosier Jews for Choice group; Jeremy Wieder, a leading rabbi at the theological seminary of Yeshiva University; and Rachel K. Laser, who in 2018 became the first woman, Jew and non-Christian to lead Americans United for Separation of Church and State. 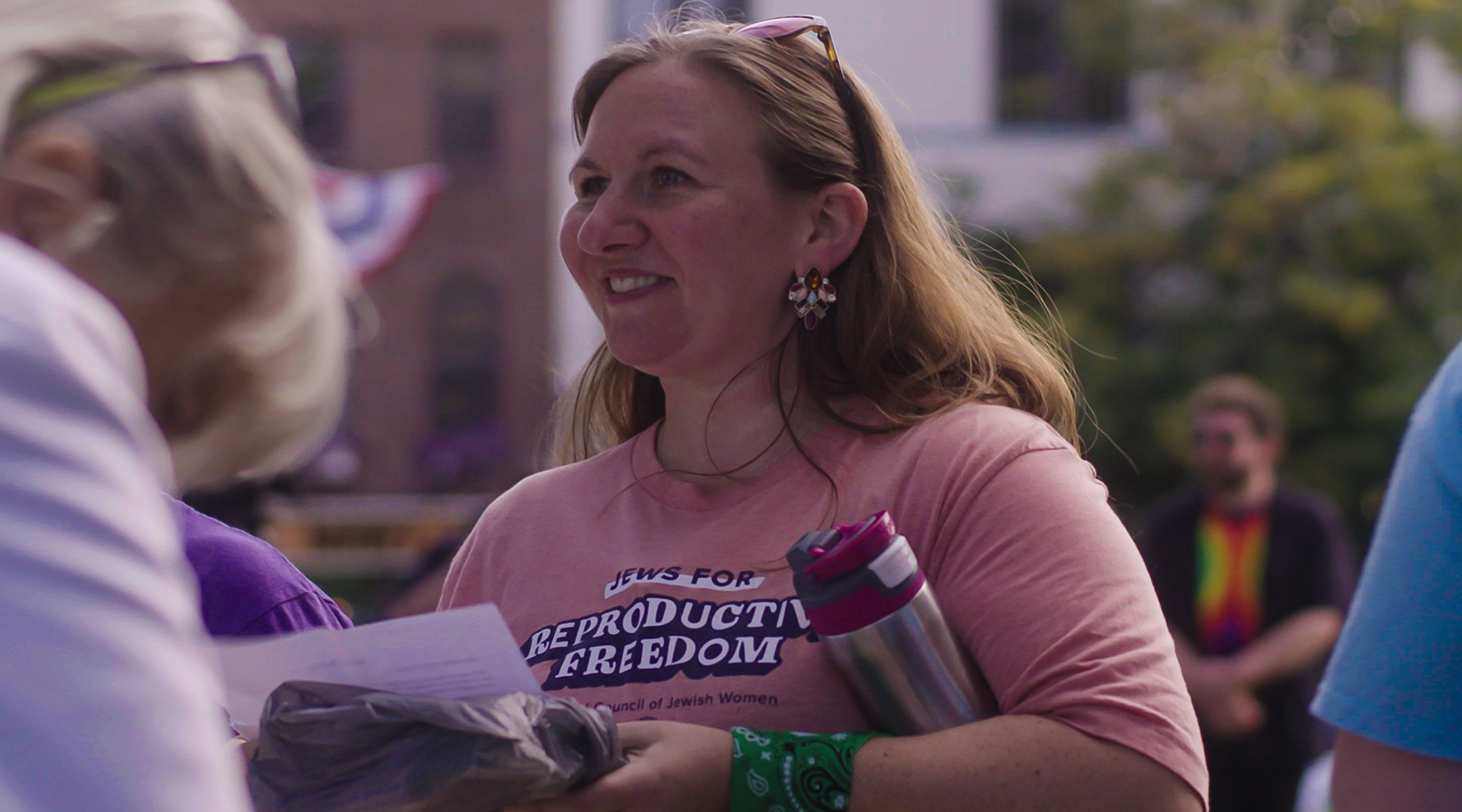 A woman named Elly shown in film at a protest in Indianapolis with the Hoosier Jews for Choice group. (Courtesy of “Under G-d”)

“The test is this: Are you going to use RFRA only to protect fundamentalist Christians and their intolerance,” Silver asks in the 24-minute film, “or do Jews get to use it too?”

Cohen’s group led a lawsuit that led to a judge issuing a preliminary injunction in December against Indiana’s abortion ban, blocking its enforcement for now. Laser’s group joined a lawsuit filed in Missouri just last week. And three Jewish women filed a lawsuit alleging infringement of their religious freedom in Kentucky in October.

“The fact that Jews were leading this tactic and this battle, really no other group was thinking about it this way,” Eiselt said. “But as Jews, we know what it’s like when there is no separation between church and state, and this is the prime example of that.

“Of course, now there are many communities joining in with Jews, but Jews are kind of the one who started this,” she added. “I think that’s really true to Jewish involvement in civil rights and human rights, and it was inspiring.”

She noted that people from across the Jewish spectrum were included in the film — which ends with a rally that includes a Havdalah, or post-Shabbat service — and that the overwhelming majority of American Jews favor abortion rights, more than any other religious group, according to studies.

“Diverse Jews, different denominations,” the director said of her interview subjects. “The vast majority of Jews agree on this, from Orthodox to non-observant. There are very few Jews who will say that these bans are in line with values and law.”

Wieder, from Yeshiva University, says in the film that a minority view within Orthodox Judaism believes that “life begins at 40 days after conception,” while the majority says life begins at birth, and seemingly no Jewish religious tradition states that life begins at conception.

Eiselt, a mother of four, identifies as a Modern Orthodox Jew and is a board member of the Jewish Orthodox Feminist Alliance, where she focuses on reproductive justice issues. She describes the group as “a feminist organization within the Orthodox space that uplifts women’s leadership and participation in Jewish ritual.”

Her first film, “93Queen,” told the story of Ezras Nashim, a female ambulance corps that had to fight for acceptance in the Borough Park haredi Orthodox community.

Funding for the new film came from various film companies and philanthropic organizations, including Concordia Studios and the Sundance Institute, as well as Jewish Story Partners, the foundation backed by Steven Spielberg that launched in 2021.

The film debuted Jan. 22 — on the 50th anniversary of the Roe v. Wade ruling — and is showing in competition at Sundance. After that there are other plans: A “large impact campaign,” as Eiselt described it, will include screenings around the country, including with “Jewish groups, political groups, and reproductive rights groups.”

“Whatever communities you’re in, women are having abortions,” Eiselt said. “Whether they’re mothers, not mothers, whether they have five children, no children. This is part of women’s health care, so it affects everybody and in certain communities, such as more Orthodox communities where I come from, people don’t really talk about it, but it happens commonly.”