A Houston synagogue is tightening security after a woman broke in twice, damaged a Torah and harassed children 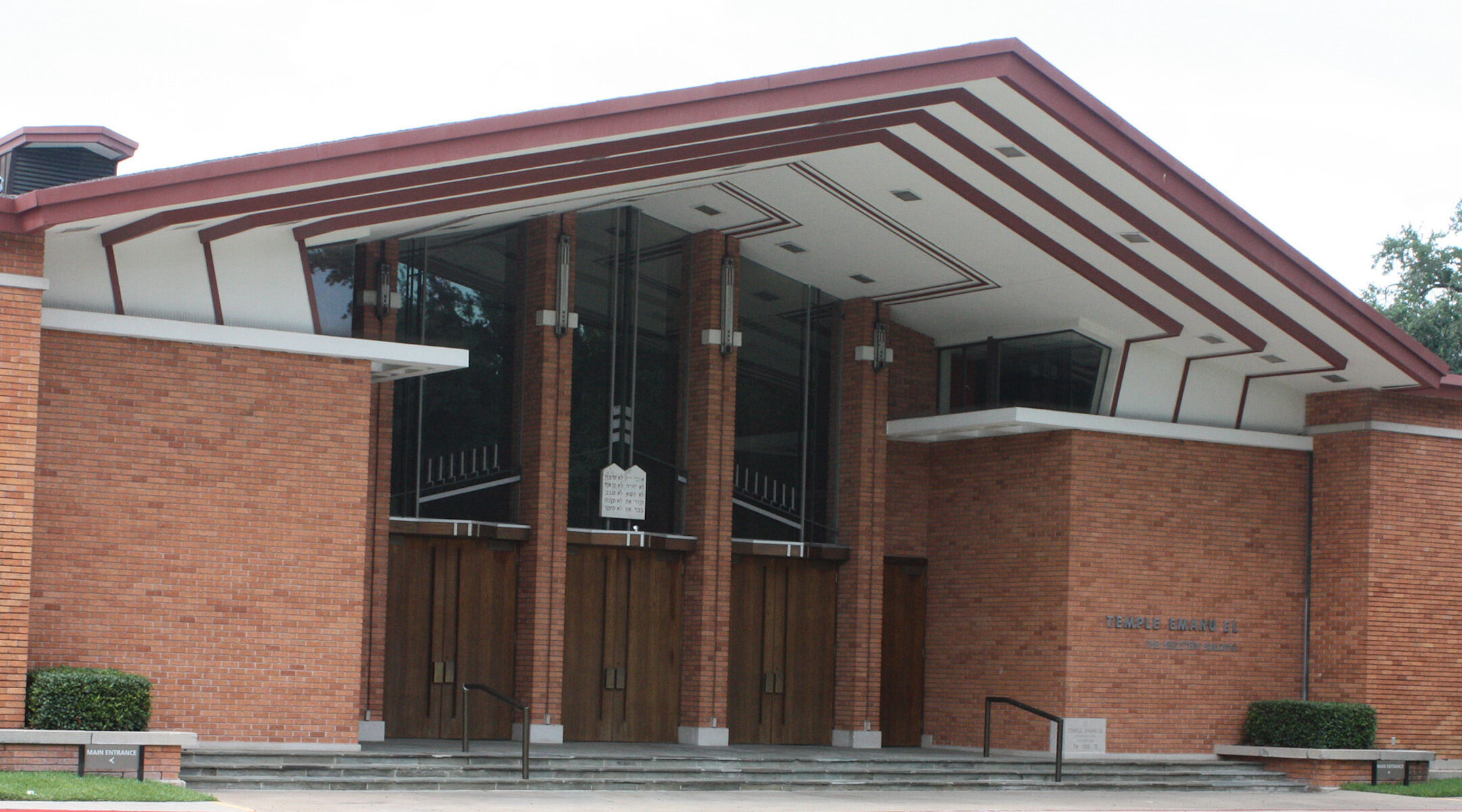 (Houston Jewish Herald Voice and JTA) — A Houston synagogue is shoring up its security practices after a woman who said she was motivated to vandalize it by Messianic beliefs entered without being detected.

Ezra Law broke into Congregation Emanu El in the early hours of Jan. 14, causing damage to both the building and a sacred Torah. After spending six hours in the building — including drinking wine and spilling it on one of the sacred Torahs — she was discovered by security personnel before Shabbat services and subsequently arrested.

Law was soon released on bond, but instead of showing up at her court arraignment, she returned to Emanu El on Friday to disrupt a preschool class, harassing young children before fleeing. Law was arrested again later that day and was released for a second time on Sunday.

That night, she posted online that she had targeted the synagogue in retaliation for being turned away previously because of her belief in Jesus.

The incident, which unfolded on the one-year anniversary of a gunman taking four people hostage at a synagogue in Colleyville, Texas, has shaken the Houston Jewish community. It has also prompted a review of the lapses that twice allowed Law to enter the Emanu El building.

In the first incident, Law was able to remain undetected and alone in the building because the alarm system had been deactivated while scheduled maintenance was being conducted the previous evening. In the second, she entered the building through a door that had been propped open for workers who were loading equipment into the foyer.

“Our personnel failures and the breaches in Emanu El’s security over this past week are totally unacceptable, and we make no excuse for them,” Senior Rabbi Oren Hayon said in a joint statement with Emanu El President Stuart Gaylor and Executive Director David Lamden.

The incident at Emanu El comes as Jewish communities around the country have spent significant sums to develop security systems and train members on security practices, often with the support of Jewish community organizations, in a campaign that accelerated after the 2018 Tree of Life synagogue shooting in Pittsburgh that killed 11 Jews during Shabbat services. Colleyville’s rabbi credited that training with enabling him to keep his congregants safe and ultimately escape their captor during the hostage crisis there.

Last year, Houston’s Jewish federation launched a security program as part of the Secure Community Network, a Jewish security nonprofit, and hired a retired FBI agent named Al Tribble to serve as community security director. Tribble, whose job is to train synagogues, schools and other local Jewish institutions on how to keep their community members safe, has been involved in the response to the incidents at Emanu El.

Hayon said Emanu El has taken several steps to increase security, including during religious school classes on Wednesday and Sunday and by boosting the visible police presence on campus.

The synagogue, a Reform congregation with thousands of congregants from all around Houston, is continuing to determine the extent of the damage caused by the intruder, which includes a broken window and wine stains on the back of a Torah scroll and carpeting.

“The events of this past week have made many of us concerned about our safety and that of our loved ones,” Hayon told the Jewish Herald-Voice. “Our security team is committed to ensuring the safety and security of congregants, staff and especially our children.”

Security personnel detained Law after discovering her inside the synagogue on Jan. 14 until Houston Police officers arrived to arrest her. As a condition of her release on bond, she was forbidden from being within 1,500 feet of the congregation.

After her release, Law posted messages targeting Emanuel El on her social media accounts. “Cost of spilling red wine on the Rabbi’s robes at Congregation Emanu El Synagogue Houston: $1,500,” read one of the posts. “Cost of the royal blood of Jesus Christ that was spilt on the cross for your sins so that you may have reincarnation in my kingdom: Priceless.”

Law’s Instagram profile, where she has continued to post about her vendetta against Emanu El even after her second arrest, suggests that she is in her 20s and at one point worked in tech and traveled frequently, including, she posted once, to Israel. The account, which posted several times since 2015 about celebrating Jewish holidays, became devoted in the last several weeks to posts about Jesus and the conversion of Jews to Christianity.

Late Sunday, Law posted a screenshot of an explanation that she said planned to deliver in court, saying that she had retaliated against the synagogue after being turned away because of her belief in Jesus and had subsequently fled after the second incident to a Messianic synagogue. (Messianics adopt Jewish practices but believe in the divinity of Jesus, and proselytizing to Jews is a core activity.) Congregation Beth Messiah, where Law went after leaving Emanu El, said it had called the police after Law’s Uber driver reached out with concerns while she was inside.

“I would like to point out that I only visited Congregation Emanuel El Synagogue out of the kindness and generosity of my heart to share the gospel with them,” Law wrote, adding that she had not meant to spill red wine on a Torah and wanted to pay for the repairs.

Hayon said that after the first incident Emanu El took several steps to increase security, including during religious school classes on Wednesday and Sunday and increased the visible police presence on campus. In addition, after multiple conferences with law enforcement, the district attorney’s office, and Tribble, the synagogue and others distributed Law’s social media posts and photograph to all Emanu El staff members, encouraging them to remain vigilant.

Yet when Law returned to the Emanu El campus on Friday, she was able to enter through an open door and sit among early childhood students and staff who were holding a Shabbat service in a chapel.

The school director and synagogue cantor recognized Law and swiftly summoned security personnel. Guards attempted to remove Law from the chapel but she fled the building before police arrived. She had been inside the building for less than five minutes.

One day later, Law was apprehended and arrested by law enforcement for a second time. She was again released on bond on Sunday.

“Over the past few days, we have learned much about the shortcomings of our security systems and the protocols that were not followed carefully during these times of crisis,” Hayon, Gaylor and Lamden said in their letter to community members. “We have every reason to believe that our campus is safe for you and your families, and that all classes and programs at Emanu El this week will continue as scheduled.”

Emanu El is actively assessing — with the assistance of third-party professionals and consultants — and evaluating its systems, controls and protocols. Several immediate changes include reducing the access points onto the Emanu El campus; employing a two-step verification process for visitors and increasing vigilance, reinforcement and communication about existing security protocols.

As a result, students at neighboring Rice University may no longer will be able to cut through Emanu El’s campus to get to and from graduate apartments, which are located just north of the synagogue.

Emanu El also is providing emotional and spiritual care to its staff and community. This support will include the presence of its clergy’s pastoral counseling resources and trauma-informed counseling professionals, provided by Jewish Family Service Houston.

“All of us recognize that this has been a difficult week for everyone, and that our homes and our hearts have been weighed down by anxiety, fear and uncertainty,” the Emanu El statement read.

“It is precisely by opening ourselves up to vulnerability and tenderness that we allow our synagogue to do its most effective work — but for this same reason, if our synagogue ever becomes a place where we feel unsafe or insecure, the pain of that breach becomes even more acute and hurtful.”

A version of this story originally appeared in the Houston Jewish Herald-Voice and is reprinted with permission. It has been updated to reflect a statement by Congregation Beth Messiah.