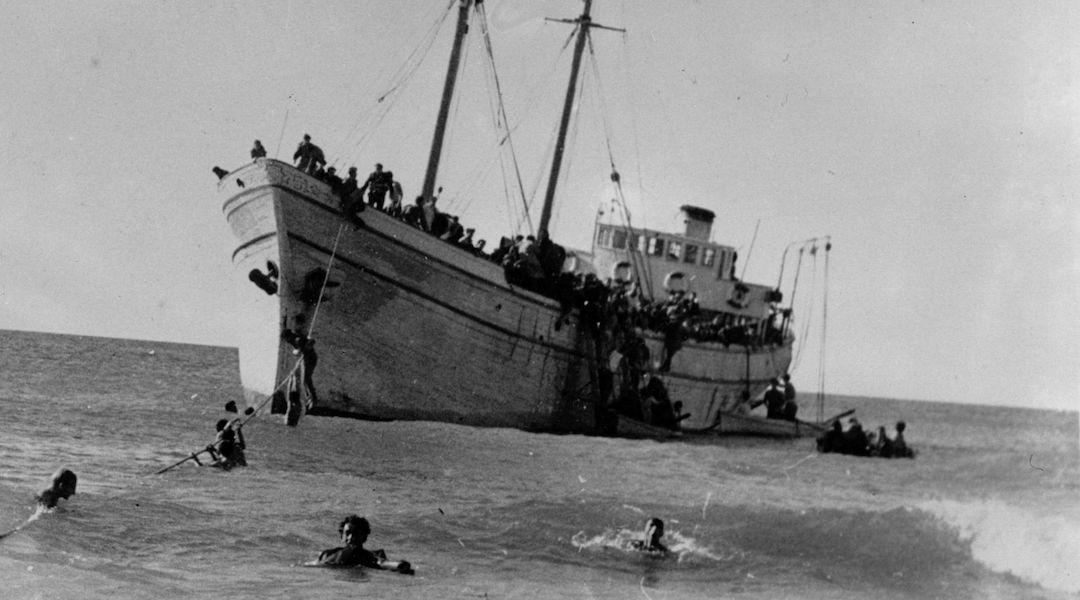 Jewish refugees swim to shore from the SS 'United Nations' (formerly the Archimedes) near Haifa, 1948. It sailed from Bari, Italy, evading vessels of the British blockade on the way. (Keystone/Getty Images)
See Original Daily Bulletin From This Date
Advertisement

The refugee rescue ship Mousinho arrived here from Lisbon yesterday with 734 passengers, including 132 children, one of whom was horn aboard the ship.

The children, who wore identification tags around their necks and carried American and Portuguese flags, sang the “Star Spangled Banner” as they disembarked at Staten Island. They had been taught the anthem by missionaries returning from their abortive voyage aboard the Zemsam. Many of the ship’s officers kissed children good-bye as they left.

The children were cared for in Portugal by the Joint Distribution Committee, operating through the OSE, and here they will be under the supervision of the American Committee for Care of European Children.

The baby born on shipboard–on Friday, the 13th–is Henryk Kaston, son of a Polish Jewish violinist, who served in the French army on the Maginot Line, was captured by the Germans, but managed to escape by a ruse and finally reached Lisbon to rejoin his wife.

One of the prominent passengers was Chief Rabbi Robert Serebrenik of Luxemburg, who related how he put the Nazis in the position of being obliged to continue his Government salary as Chief Rabbi after the occupation. When ordered discharged, the rabbi advised the authorities that under Nazi regulations an “Aryan” had to be appointed to replace every Jewish official removed from his post. Since this obviously could not be done in his case, Dr. Serebrenik was allowed to continue in his post, with salary. “I was the only Jew in all Nazi-occupied Europe on the official German payroll,” he said.

Indicative of their experiences in German concentration camps and French internment centers, the children shrank back from questioners until their confidence could be gained. In general the children said they were happy to have reached America, but their joy was tempered with sorrow at leaving their parents behind. One girl said, “this is like a dream, but I am only half happy.”

Ten of the children were from the Baron Rothachild home in Paris and had been brought here through the HIAS under the care of Issac Chomski. There were two brothers, Martin Baer, 10, and Albert, 13 1/2. Martin had won a contest during the 11-day voyage for having done the hest job of washing behind his ears.