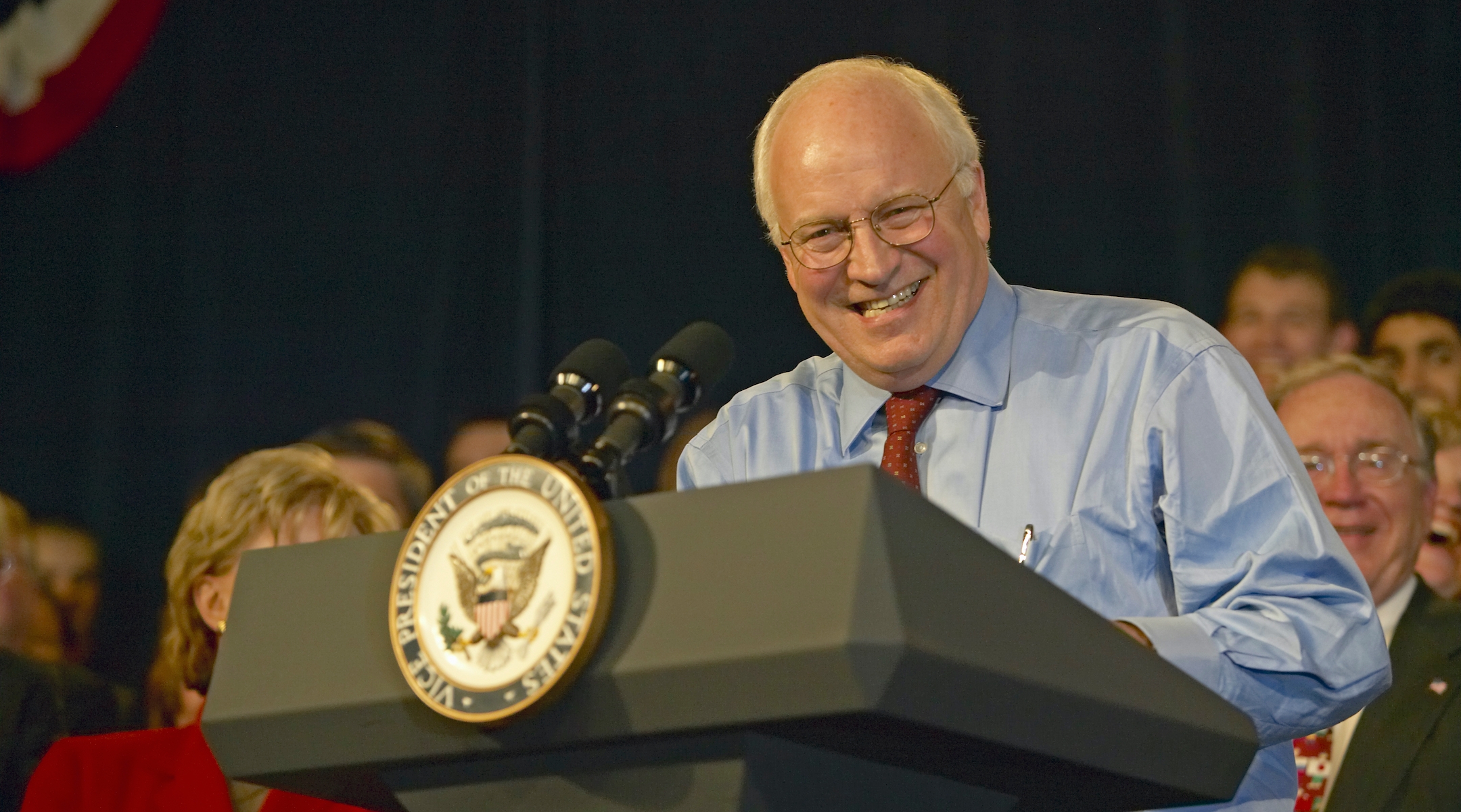 Dick Cheney at a campaign rally in Ohio in 2004. (Joe Sohm/Visions of America/Universal Images Group via Getty Images)
See Original Daily Bulletin From This Date
Advertisement

Jewish voters in Ohio may be split about which presidential candidate to choose on Nov. 2, but one thing seems certain: Few seem thrilled with their choices. Michael Halasz, a dentist in Centerville, a suburb of Dayton, summed up the overriding attitude of many Jewish voters this year when he said he’ll vote for the “lesser of two evils.”

“We’re better off with Bush for four more years than with Kerry for eight,” he said.

With Ohio’s 20 electoral votes at stake in an evenly divided electorate, pundits consider the state a “must win”for both President Bush and Sen. John Kerry (D-Mass.).

No Republican has been elected to the White House without winning Ohio. In addition, only twice in the last 100 years, in 1944 and 1960, did Ohio voters not vote for the winning presidential candidate.

In the latest Gallup Poll of likely Ohio voters, taken Oct. 17-20, Kerry received 48 percent of the vote to Bush’s 47 percent. Four percent were still undecided, and the poll had a margin of error of 4 percent.

The approximately 145,000 Jews make up only 1.3 percent of Ohio’s 11.5 million residents, but both political parties have expended much time and expense hoping to lure them.

Over the past month, all of the four major players in this year’s election — Bush, Vice President Dick Cheney, Kerry and his running mate, Sen. John Edwards (D-N.C.) — have visited Ohio repeatedly.

On Thursday, just five days before the election, the Columbus Jewish Community Relations Council, an arm of the local Jewish federation, was to sponsor a debate between Ira Forman, executive director of the National Jewish Democratic Council, and Tevi Troy, an Orthodox Jew and Bush campaign strategist.

On Sunday, Harvard professor Alan Dershowitz, John Kerry’s brother Cameron Kerry and Footlik, among others, led a campaign blitz across the state, addressing Jewish Democrats at rallies in Cleveland, Columbus and Cincinnati.

On the other side of the aisle, Ed Koch, a former Democratic mayor of New York City, and former Bush White House spokesman Ari Fleischer are just two of the heavy hitters who have addressed Ohio Jewish audiences recently in support of Bush.

When Fleischer spoke to a standing room-only crowd of more than 600 in Beachwood, a heavily Jewish suburb of Cleveland, on Sunday evening, additional seating had to be brought in to accommodate the overflowing audience, said William Daroff, deputy executive director of the Republican Jewish Coalition.

In battleground states such as Ohio, Pennsylvania and Florida, Bush “is exciting Jewish crowds. He will certainly do better in this election than he did in the last election when Joe Lieberman was running and skewed the Jewish vote in favor of that ticket,” Daroff said, referring to Sen. Joseph Lieberman (D-Conn.), Al Gore’s running mate in 2000. “President Bush’s support for Israel is appreciated by the Jewish electorate and will translate into a victory on Nov. 2.”

But despite the amount of money and energy being expended on Ohio’s electorate, Footlik said Jewish support for the Kerry/Edwards ticket is as solid as it was for Gore/Lieberman in 2000, when the Democrats won nearly 80 percent of the Jewish vote.

“We gauge our success in enthusiasm, which is very high, and by polls showing Jews enthusiastically vote Democratic,” Footlik said.

Not all Jews are Democrats, of course, with Ohio state Sen. David Goodman providing an example of a younger Jew who defines himself as a conservative.

According to Goodman, who is seeking to unseat a Democrat as a county commissioner in the Columbus area, “Republicans are now making headway in our community because our positions on issues of importance are more in tune with the Jewish community.”

Rabbi Eric Slaton, spiritual leader of Beth Israel Synagogue, a Conservative shul near Cincinnati, said this election will mark the first time he has voted for a Republican presidential candidate.

Two issues top Slaton’s list of priorities: homeland security and Israel. He expressed concern for the United States and Israel if we change presidents in the current political turmoil.

While not endorsing either presidential candidate, Joyce Garver Keller, executive director of the Columbus-based Ohio Jewish Communities — a lobbying organization representing all eight Jewish federations in Ohio and partner agencies of Jewish organizations across the state — said she thinks Jews overwhelmingly support Kerry over Bush.

“I have no sense of a seismic shift from the Democrats to the Republicans,” she said. However, voters for whom Israel is a top priority likely will support Bush, she acknowledged.

“For those Jews for whom Israel is the only issue, Bush rates higher in the Jewish community,” she said. Those Jewish voters, she said, “make up the wiggle room.”

Slaton’s wife, Kim, who said she has only once voted for a presidential candidate who won, agreed with Garver Keller.

Though she considers herself undecided, Slaton said she is “leaning toward Bush only because of his record and support of Israel.”

However, if she does end up voting for Bush — which she won’t decide until she actually stands in the voting booth on Nov. 2 — “I won’t brag about it,” she said.

“For those Jews who have been Democrats, today it’s ‘Israel plus,’ like Israel plus gay rights, or Israel plus stem cell research,” she said, mentioning some key issues in the campaign.

Ronna Greff Schneider, a law professor at the University of Cincinnati who was Kerry’s moot court partner when they were students at Boston College’s law school, noted that Kerry appeared as adamant as Bush about not dealing with Palestinian Authority President Yasser Arafat because of his ties to terrorism.

Plus, she noted, Kerry’s domestic agenda is closer to that of the Jewish community.

“The Jewish community is not speaking in one voice, but the Kerry campaign wants Jews to know his platform reflects Jewish concerns, such as education,” Schneider said.

The economy and the war in Iraq are top issues for Marian Harris, 63, while health care is of overwhelming concern to Mandy Miller, 40.

“You can’t call yourself a Jew if you don’t support health care,” Miller said. “Just because I’m pro-Israel does not mean I have to support George Bush. He has an apocalyptic view of Israel. I feel used because Bush is using Israel for evangelical purposes.”

Harris admitted that Kerry has not proposed any concrete ideas to solve the Israeli-Palestinian crisis, but she hopes that by simply injecting new blood into the mix, change will come.