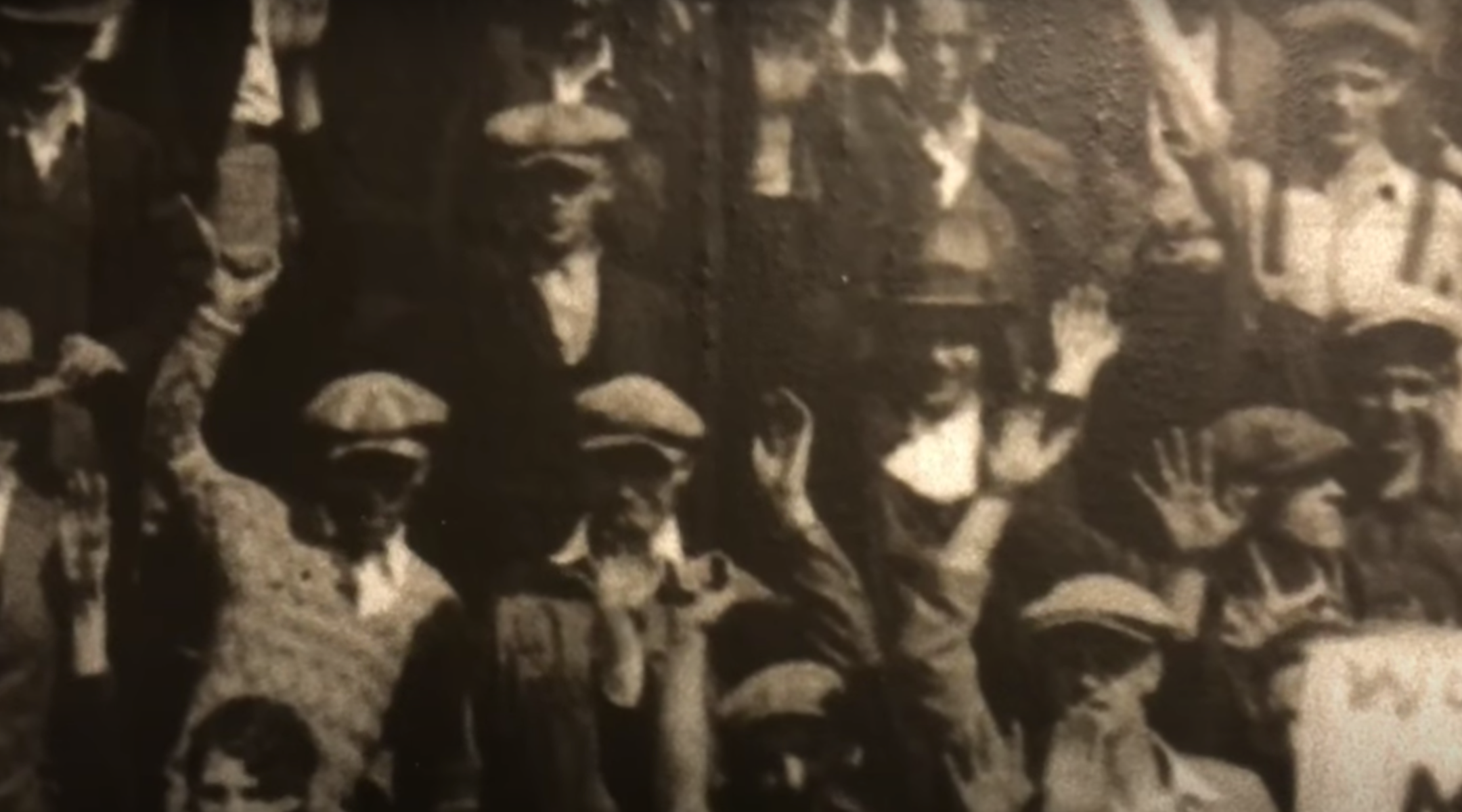 A scene from a textile strike in Gastonia, N.C., in 1929. (Screen shot from YouTube)
See Original Daily Bulletin From This Date
Advertisement

Amy Schechter, a daughter of the late Jewish scholar and president of the Jewish Theological Seminary of America, Dr. Solomon Schechter, is among the fifteen textile strikers who have been arrested in Gastonia, North Carolina, on charges of murder, in connection with the death of O. F. Alderholt, Chief of Police, on June 7. The formal indictment is scheduled to be made on July 29th, after which the date of the trial will be set.

According to forecasts in the radical labor press, the trial may have repercussions, rivalling those aroused by the Sacco-Vanzetti case. Miss Schechter was in charge of the International Labor Defense Headquarters in Gastonia which has been aiding in the defense of the millhands since the opening of the strike in April. Although she was in the headquarters of the International Labor Defense, and not on the scene of the battle, she is held without bond, on the charge of murder, together with the following : Fred Erwin Beal of Lawrence, Mass.; K. O. Byers, Wm, M. McGinnas, Louis McLoughlin, George W. Carter of Mispah, N. J.; Vera Bush of New York; Joseph Harrison of N. J.; J. C. Heftner, Robert Allan, Russel Knight, N. F. Gibson, K. Y. Hendricks, Sophie Melvin and Delmare Hampton. With the exception of Miss Schechter, Mr. Beal, Miss Bush and Mr. Harrison, all are textile workers.

The International Labor Defense, which undertook the defense of the accused, has enlisted the services of Dr. John Randolph of Scopes evolution trial fame; ex-Judge Frank Carter, of Asheville; Tom P. Jimison, ex-Methodist minister, long active in labor circles; Joseph Brodsky of New York, Leon Josephson of Philadelphia and others.

The defense is now concentrating on obtaining a change of venue, it being asserted that if the trial is held in Gastonia the proceedings will be influenced by a mob spirit. The counsel for the defense have collected a great number of affidavits to the effect that Gaston county’s hatred of the labor agitators has reached lynching fever. They contend that a fair trial is impossible when the jurors must be drawn from a panel of less than 20,000, most of whom own stock in the mills and are deeply prejudiced against the “Godless Communists.” “Communism against Americanism” is the local slogan. One local paper repeatedly demanded “vengeance on the Russian anarchists who killed our beloved Chief in cold blood.” The “Greensboro Daily News,” a newspaper published in a neighboring town, reports that “Gaston County is desperately near the mood to try a dozen or more malcontents for murder and condemn them for what they think of God, marriage and the nigger.”

The tragedy grew out of a strike of textile workers in the Loray Mills of the Manville-Jenckes Company, the first serious labor disturbance in the South, with the Communists taking an active part. The charge against the fifteen workers is the result of a battle which took place in Gastonia on June 7th, between the textile strikers and the town police. During the battle the Chief of Police was killed, two policeman, one ex-policeman, and the strike agitator, Joseph Harrison, wounded. Eight other prisoners are charged with intent to kill and have been held under bail of $750.

Only six of the strikers indicted are known to have had guns at the time of the shooting.

The battle started, it is alleged, when a police department automobile, with the chief of police, an ex-policeman named Roach and a policeman, Gilbert, entered into the tent colony established by the strikers with the help of the Workers International Relief Association. Following a fire which had destroyed the first tent colony of the strikers, forced to live in tents and maintain their own stores following their eviction from company-owned property, it was decided to maintain their own guards, inasmuch as police protection was declared unreliable. When the policemen were challenged by the colony’s guards, it is stated that the policemen opened fire on the guards. The attempt to enter the tent colony followed the forcible dispersion of a picket line which was marching to the factory. Roach and Gilbert have been indicted for attempt to murder following an assault at 6:30 P. M. on the evening of June 7, prior to their visit to the strikers’ colony, it is reported.

Miss Schechter was formerly associated with the editorial staff of the “Maccabean,” a Zionist journal. Several years ago, she went to Soviet Russia, where she spent some time as a teacher.

Judge Hoyle Sink of the Superior Court was appointed by Governor Max Gardiner of North Carolina to sit on the case. It is now believed, however, that he will be replaced by Judge Barnhill of the Superior Court. Clyde Hoey, brother-in-law of the Governor, is in charge of the prosecution.

“The spirit of animosity among Gastonia’s authorities has been clearly shown already,” according to Joseph Brodsky, one of the counsel for the defense, describing the habeas corpus proceedings which he conducted several weeks ago. “Arrests were made on the three days following the murder. We were denied our application for writs of habeas corpus. Ninety-five men and women were held incommunicado. Finally, we secured a writ signed by Superior Court Judge Harding directing all the witnesses to be produced in court on the following Wednesday at 10 o’clock, in Charlotte.

“To embarrass the defense, the Gastonia authorities called a hearing in Gastonia at 9.30 A. M. Wednesday. Since the defense attorneys felt it most important to get to the Charlotte Court, they waived the preliminary hearing. Then Judge Harding put on the defendants the burden of refuting the presumption of guilt alleged to be carried by the unavoidable waiver of the first hearing in Gastonia.

Typical of the attitude of Gaston County were the questions stressed by Clyde Hoey, prosecutor, before the Charlotte Court hearing. “Do you believe in God,” he asked Amy Schechter. She said she could not answer, “yes” or “no.” Judge Harding upheld the prosecutor’s insistence that the witness answer categorically. She answered “no.”