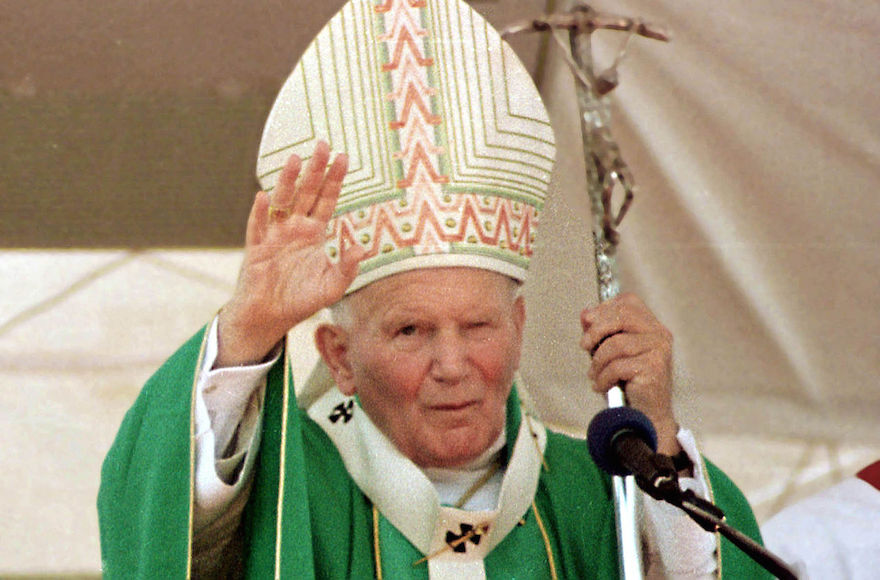 Pope John Paul II visited the main synagogue here Sunday, the first Pontiff in history to enter a Jewish house of worship. He spoke for 20 minutes in words exceptionally warm and rich with meaning, addressed obviously not only to Rome’s 2,000-year-old Jewish community, the oldest in the Western diaspora, but to Jews and Christians all over the world.

But above all, it was the scene itself which spoke with memorable eloquence. There was no precedent to the visual impact of the white-robed Pope and the similarly white-robed Chief Rabbi of Rome, Elio Toaff, seated side-by-side at a white-draped table, in perfect equality; the Papal entourage seated behind the Pope; the rabbinical entourage behind the rabbi.

John Paul referred to the Jewish people as “Our dearly beloved brothers and, in a certain way, it could be said that you are our older brothers.” he addressed himself to the centuries of persecution by the Church suffered by Jews and the long process of reconciliation, begun with Vatican Council II in 1965 and its famous declaration, Nostra Aetate (Our Times), which repudiated Jewish guilt for the death of Jesus.

“Once again, through myself, the Church, in the words of the well-known declaration Nostra Aetate, deplores the hatred, persecutions and displays of anti-Semitism directed against the Jews at any time and by anyone,” the Pope declared. “I repeat, by anyone,” he added which, to all present was seen as a reference to the Church itself.

The Pope listened with eyes closed as Giacomo Saban, president of the Rome Jewish Community, speaking in tight, measured and precise tones, reviewed the vicissitudes, humiliation and sufferings of Roman Jewry in the long centuries of Papal rule.

Saban was the first to address the hushed throng in the synagogue. He stressed the centrality of Israel to the Jewish people, a broad hint of the disappointment felt at the Vatican’s refusal to date to extend diplomatic recognition to the Jewish State.

The Pope made no direct reference to this. But his general statements implied his awareness that the issue will have to be faced in the future. “It is not, of course, because the differences between us have not been overcome that I have come among you. We know well that this is not so,” he said.

“Perhaps there still remain between us difficulties of the practical order waiting to be overcome on the level of fraternal relations. These are the results of mutual misunderstanding, and also of different positions and attitudes not easily settled, in complex and important matters.”

The last phrase, according to Vatican experts, was the Pope’s way of replying that the issue of recognition of Israel is still unsolved and needs to be solved.

The Pope also used several key phrases which seemed to be a direct reply to Jewish objections to concepts recently expressed in Papal homilies. Speaking of love and justice, he said “Christians have learned this desire of the Lord from the Torah, which you venerate, and from Jesus, who took to its extreme consequences the love demanded by the Torah.”

That statement too was seen as an emphasis on the post-ecumenical Catholic teaching that Christianity was a continuation of Judaism, not a new religion of love as set up against an obsolete religion of mere law. The Pope also repeated the concept that “The Jews are beloved of God who has called them with an irrevocable calling.”

The Pope spoke of the “long period” of reconciliation which “this gathering in a way brings to a close, after the Pontificate of John XXIII and the Second Vatican Council” which we “must not tire of reflecting upon in order to draw from it the appropriate lessons.”