Anti-Semitism Keeping Rome Rabbi a Prisoner in His Own Synagogue 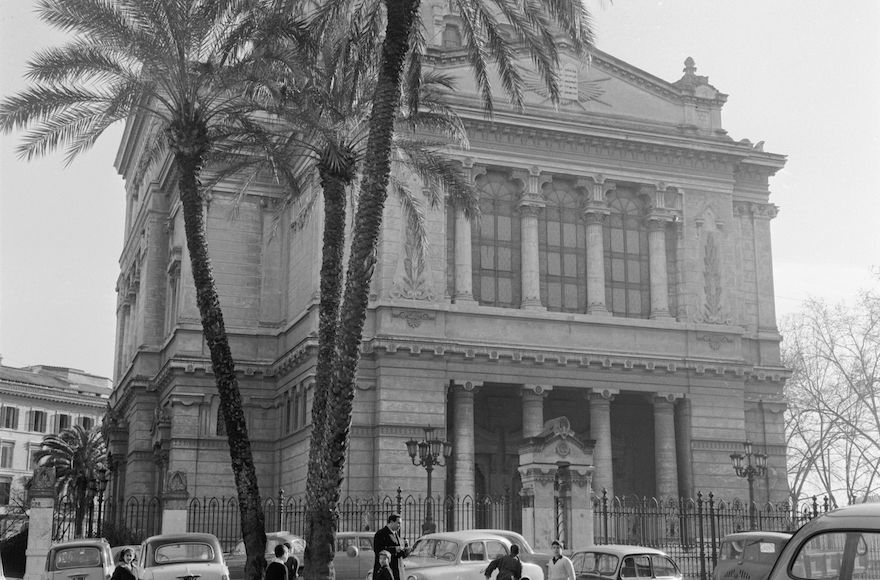 Circa 1955: The Great Synagogue in Rome. Erected in celebration of the freedom of the jewry of Rome and built using the stones of the ghetto wall. (Photo by Evans/Three Lions/Getty Images)
See Original Daily Bulletin From This Date
Advertisement

Delivering new warnings on the resurgence of racism and anti-Semitism in Italy, Rome’s chief rabbi told a newspaper here that he is virtually a prisoner in his own synagogue, protected by armed guards and armed escorts whenever he travels.

In an interview published Monday by Corriere della Sera, Rabbi Elio Toaff spoke of the hate mail that arrives every day. And he reiterated the charge he made two weeks ago that the official Catholic news media is as culpable as the secular press for distorted, inflammatory reporting on events in the Israeli-administered territories. He believes the coverage has given rise to anti-Semitic incidents in Italy.

While Toaff again charged that parts of the Catholic media are anti-Semitic, he also praised a document issued by the Conference of Catholic Bishops on May 23 that expressed deep concern over the incidents, condemned anti-Jewish attitudes and warned Italians to beware of anti-Semitic feelings.

The bishops’ statement was in direct response to Toaff’s charges less than a week earlier. Toaff said in the interview that he was especially appreciative that the bishops made clear that there is a distinction between Italian Jews and policies carried out by the government or political parties in Israel.

Nevertheless, the problem remains serious. “There are too many signs that racism has never disappeared, that it has smoldered under the ashes (of fascism). Even in 1938, it began on the quiet and exploded a few years later, and Jews were not the only victims,” he said.

Toaff said anti-Semitic slogans are appearing increasingly on walls. Some say “yes” to a “referendum” on reopening Auschwitz and sending Jews to the gas chambers.

“Certainly, some of it is the work of neo-Nazis,” the chief rabbi said. “But the thing that worries me the most isn’t when it’s nostalgic adults, but rather when it’s young people who, I don’t know where, have absorbed this type of ideology.”

He said not enough is done in the schools to fight prejudice. When the interviewer suggested that Jews tend to see themselves as the main victims when describing prejudice, Toaff, who was interviewed at his office in the main synagogue, asked the reporter:

“At this moment you are in a temple, in a church. Does it seem normal to you that we have had to transform it into a bunker with so many blinds, armed guards, armored doors?”

The rabbi added, “I myself, the only such rabbi in Europe, pass my days as if I were under arrest. I cannot move one step without an escort. When I go outside Rome, one car drops me off, another car picks me up. I can’t travel by train.”

Rome’s main synagogue, near the banks of the Tiber, and most Jewish institutions and Israeli missions are continually under heavy guard against possible terrorist attacks.

This began in 1982, after an Arab terrorist machine-gunned worshipers outside the main synagogue, killing a child. In 1985, terrorists attacked the El Al counter at Rome’s Leonardo da Vinci Airport, leaving 16 dead and scores injured.