Fighting Back from Adversity, Kirk Douglas Recalls ‘Stroke of Luck’ 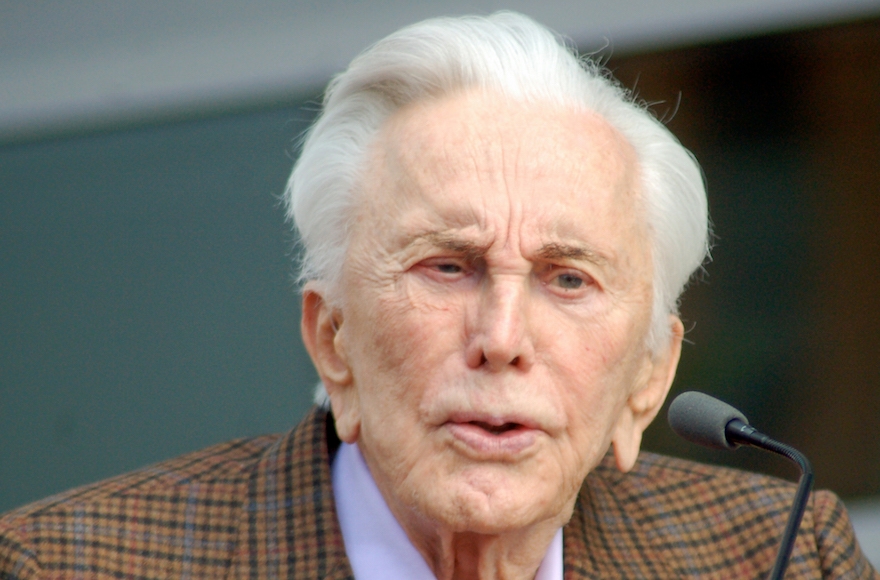 A stroke had left him literally speechless, an actor’s worst nightmare. A painful compressed spine reminded him constantly of an earlier helicopter crash. A pacemaker had been implanted in his chest and his knees were giving out.

In a deep depression, he said he spent his days “in a black cave far down below the surface of the earth.” One day, he took a gun from his desk drawer, loaded it, put the barrel in his mouth — and bumped it painfully against his teeth.

“Ow!” he said, and pulled the gun out. Then, he recalls, “I began to laugh. A toothache delayed my death. I laughed hysterically.”

Then another thought struck him: Suicide would be such a mess for the housekeeper to clean up. He put the gun away.

Douglas describes the episode in his new book, “My Stroke of Luck,” and it illustrates both the man’s despair and the saving humor that helped pull him through.

In a recent interview in his relatively modest Beverly Hills home before he embarked on a two-month book tour of the United States and Europe, Douglas, 85, spoke about the book, his life and his return to Judaism.

He has taught himself to speak again, slowly but distinctly. The famous dimpled chin still juts out, and with a mane of long white hair he could pass for the movie version of a viking or biblical patriarch.

Asked about the book’s title, with its seemingly ironic double meaning, Douglas responds that he means it when he talks about “a stroke of luck.”

“For all the stroke stole from me, it has given me even more,” he says earnestly. “It has led me to a great adventure and changed me into a different person — one I like better than the person I was before.”

During a Hollywood career that included 84 movies, Douglas was notorious for his egocentricity, his epic womanizing and his chosen role as a loner, without real friends.

He firmly believes that those traits and his lifestyle, as much as the later physical disabilities, led to his deep depression.

Douglas credits his new outlook, and survival, to the love of his wife, Anne, and his four sons, his immersion in Torah study and the gratification of reaching out and helping others.

His new attitude was affirmed and symbolized by his second Bar Mitzvah, celebrated on his 83rd birthday. In his speech to an audience of current and faded Hollywood stars, Douglas declared, “Today I am a man,” but “it takes time to really become a man and assume your responsibilities in this troubled world.”

After studying with a considerable number of Orthodox and Conservative rabbis, Douglas has constructed his own brand of somewhat irreverent theology, mixing spirituality with an actor’s appreciation of the great dramatic scripts inherent in the Torah, and a touch of humor.

He cites an example of the latter in his book when his recalls the decades when he was a non-practicing Jew.

However, he writes, “I always fasted on Yom Kippur. I still worked in movies, but I fasted. And let me tell you, it’s not easy to make love to Lana Turner on an empty stomach.”

Douglas has applied his showman’s take on Judaism in “Young Heroes of the Bible,” one of his eight published books, while exploring his unhappy childhood in the best-selling “The Ragman’s Son.”

He also has underwritten several playgrounds in the poorer sections of Los Angeles and Jerusalem, an Alzheimer’s hospital unit, AIDS and homeless projects and a $2 million theater now rising near the Western Wall, where worshipers will watch films on the history of the Wall, Judaism and Jerusalem.

The veteran actor looks forward to starring with his son Michael and grandson Cameron in a film this year.

At the end of “My Stroke of Luck,” written in Douglas’s characteristic colloquial and anecdotal style, the author appends six rules in an “Operator’s Manual” for coping with a stroke, or, for that matter, with life.

When things go bad, always remember it could be worse.

Never, ever, give up. Keep working on your speech and your life.

Pray. Not for God to cure you, but to help you help yourself.