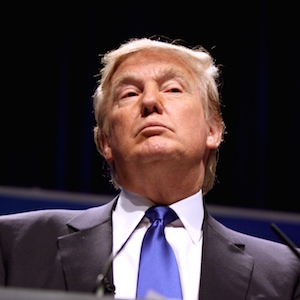 Viewers of this week’s premiere of “The Apprentice” didn’t see any yarmulkes, but they did witness the debut of two Orthodox Jews on the reality television series. Daniel Brody, 31, and Lee Bienstock, 22, are both members of the “Gold Rush” team on the show featuring Donald Trump. The first episode of the show’s latest season was aired on Monday.

Their appearance on the 16-week show, in which young people try to win a job with the headline-grabbing real-estate mogul through a series of business tryouts, has the Orthodox world abuzz.

Discussion about Brody and Bienstock has reached a fever pitch in many areas, with many wondering how their Orthodox Judaism will come into play in the series.

No mention was made of the contestants’ Orthodoxy in the first episode, so no one outside the show — whose cast is committed to iron-clad non-disclosure agreements — knows how, and if at all, their religious identities will be portrayed.

Of particular interest is how the show will portray the High Holidays, given that filming started before Rosh Hashanah and concluded at some point after Sukkot.

Rumors persist that a separate kosher George Foreman grill was kept in the luxurious apartment in Trump Tower occupied by the contestants during filming.

But people close to Brody and Bienstock express confidence that viewers won’t see them choosing success on The Apprentice over their own religious values.

“All I know is Daniel would in no way compromise the holidays or Shabbos for the show,” said Brody’s brother Steven, adding, “how the show’s going to portray that or ignore that, I don’t know.”

Bienstock’s rabbi, Kenneth Hain of Congregation Beth Shalom on New York’s Long Island, wasn’t very familiar with “The Apprentice,” Hain told JTA that “even without this acknowledgment, he’s certainly regarded as one of the fine young men in our community,” adding “we wish him all the success in the world, and we’re particularly proud of the fact that he is a committed Jew.”

Though Brody’s biography on the NBC Web site details his business experience –including owning the bakery Grandma’s Cookie Jar, which serves the community of his alma mater, Yeshiva University — his only identification on the show was as having “two boys in my family.”

Those boys, Gavriel, 6, and Natan, 4, live with Brody and his wife, Amy, in New Milford, N.J. Brody was the first teammate chosen on “Gold Rush” and the second overall; when his team’s leader was asked by Donald Trump on the show why he’d chosen Brody, the leader replied: “Because he’s a dad.”

In New Milford, Brody and family belong to Keter Torah Synagogue, and Brody regularly attends a class with the rabbi, Shalom Baum. Before Monday night’s premiere, the class met at the local pizzeria, E.J.’s, where the community was invited to watch the episode.

Brody has a bit of experience in show business, according to his brother.

“He’s done stand-up in some of the different nightclubs in New York,” Steven said, adding that Brody’s also done some work on soap operas. Steven describes his brother as a sort of jack-of-all-trades who is “successful in whatever he chooses to do. That seems to have included quite a lot, from designing and building his home kitchen to launching a successful kosher cookie-dough line.

But that showmanship wasn’t always around. Steven Brody recalled that at Brody’s bar mitzvah, he suddenly went missing before it came time for him to ascend to the dais.

“Everyone’s in shul, shul’s about to start, we can’t find him,” Steven Brody recalled. When his brother eventually was discovered, his family realized he had stage fright. Nevertheless, Daniel Brody eventually came out and read Torah beautifully, his brother said.

Bienstock, at 22 the youngest member of the cast, has less in his biography, but his friends say what’s there is strong.

Simone Greenbaum, a student with Bienstock at Cornell, recalled in an interview that on the occasion of a grandparent’s yahrzeit, which she’d been hoping to spend with her family, there was “a typical Cornell snow blizzard” with no chance for her flight home to make it.

Bienstock, “without even batting an eye, said, ‘I’ll take you home,’ ” Greenbaum recalled, adding that Bienstock explained “You know I’m a second-semester senior, I can afford to miss one or two days of school, but you can’t miss this.”

The trip didn’t harm his grade, though: Bienstock graduated Cornell with a 4.0 grade-point-average, something that he feels he was well-trained for in his years at the Orthodox high school, Long Island’s Hebrew Academy of the Five Towns and Rockaway.

Whether other students’ grades will be affected by Bienstock’s appearances remains to be seen, but Greenbaum and a fellow student, Eli Magid, said that there are plenty of viewing parties at the Cornell campus, where they say Bienstock was popular.

Bienstock’s choice to stick with what he felt was right led the team organizer to bring him into the famed Apprentice boardroom, where he could have heard Trump’s famous phrase, “You’re fired,” directed at him.

For the moment, though, Bienstock has avoided termination.

Which is something his rabbi predicted. Before the premiere, Hain told JTA that Bienstock “can hold his own with anyone, including Mr. Trump.”