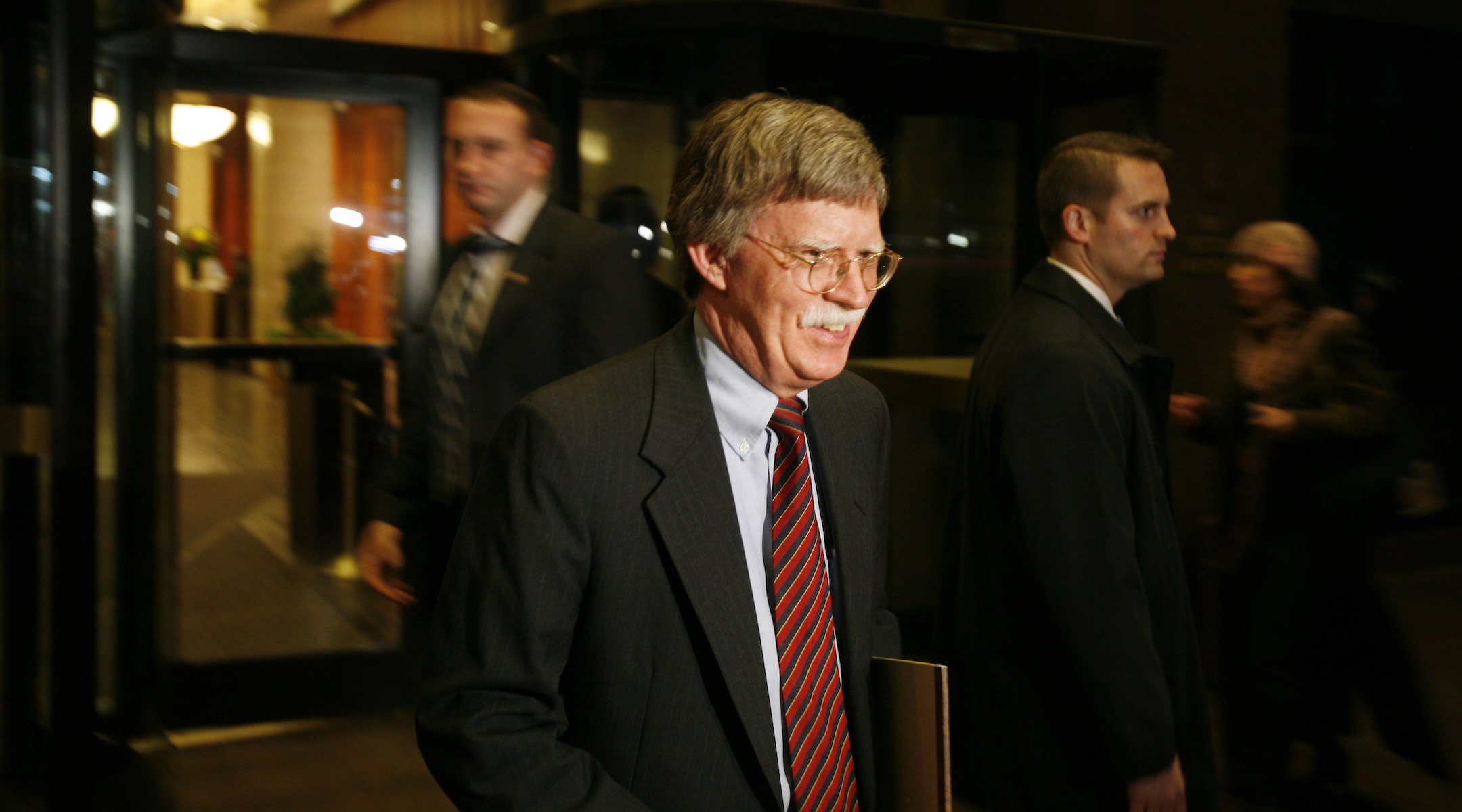 In John Bolton, the Bush administration thinks it has found someone with a track record of taking on the United Nations and rogue states. And that is welcome news to Jewish groups and pro-Israel advocates.

Bolton, 56, was nominated Monday as U.S. ambassador to the United Nations. Now the undersecretary of state for arms control and international security, Bolton has gained a reputation as a tough fighter against Iran and other countries that have sought nuclear weapons.

He also won the admiration of the American Jewish community in 1991, when as assistant secretary of state for international organizations he was the principal architect behind an initiative to repeal a United Nations resolution that equated Zionism with racism.

“He’s really a hero of that effort,” said Jess Hordes, Washington director of the Anti-Defamation League.

Bolton’s appointment to the United Nations comes at a time of growing anti-American and anti-Semitic sentiment around the world. Jewish leaders said they hoped Bolton would be able to take on efforts in the international forum to demonize Jews and the Jewish state.

The international body is expected to deal with several major Middle East issues in the coming months, including the burgeoning Israeli-Palestinian peace track, Syria’s potential withdrawal from Lebanon and the nuclear threats in Iran.

In announcing the nomination, U.S. Secretary of State Condoleezza Rice said Bolton was a “tough-minded diplomat” who is an effective multilateralist.

“John Bolton is personally committed to the future success of the United Nations and he will be a strong voice for reform at a time when the United Nations has begun to reform itself to help meet the challenging agenda before the international community,” Rice said Monday.

But Bolton also has a reputation for minimizing the importance of the international body, suggesting in 1998 that the United States should not pay its U.N. dues.

Bolton could face a tough fight in the Senate, where he must be confirmed.

“If the President is serious about reaching out to the world, why would he choose someone who has expressed such disdain for working with our allies?” Kerry said in a statement.

Bolton faced similar criticism when he was confirmed for his State Department post in 2001.

Sources said Bolton’s thinking on international issues is very much in line with President Bush’s, Vice President Dick Cheney’s and Rice’s, and that he was an advocate for the Iraq war within the State Department.

Bolton has gained fans in the pro-Israel community for his tough talk against Iran and other countries that could threaten Israel with weapons of mass destruction. He has suggested that all options are on the table to combat the Iranian threat.

At the same time, he has been critical of rumors that Israel would attack Iran’s nuclear sites, the way it bombed Iraq’s nuclear reactor in 1981.

In 2002, Bolton suggested that several countries beyond Bush’s “axis of evil” abetted terrorism, including Libya and Syria.

“John Bolton understands the important role the United Nations plays in world affairs today and will be a superb representative of American interests at the U.N.,” said Bernice Manocherian, president of the American Israel Public Affairs Committee, the pro-Israel lobby.

Bolton has occasionally been confused with Josh Bolten, the Bush administration’s director of the Office of Management and Budget, who was the first Jew to hold Cabinet rank in the White House.

Bolton, the U.N. ambassador nominee, is not Jewish.

If confirmed, Bolton would replace John Danforth, who retired earlier this year.