Jews in Azerbaijan and Uzbekistan Live in Muslim World, but Feel at Ease 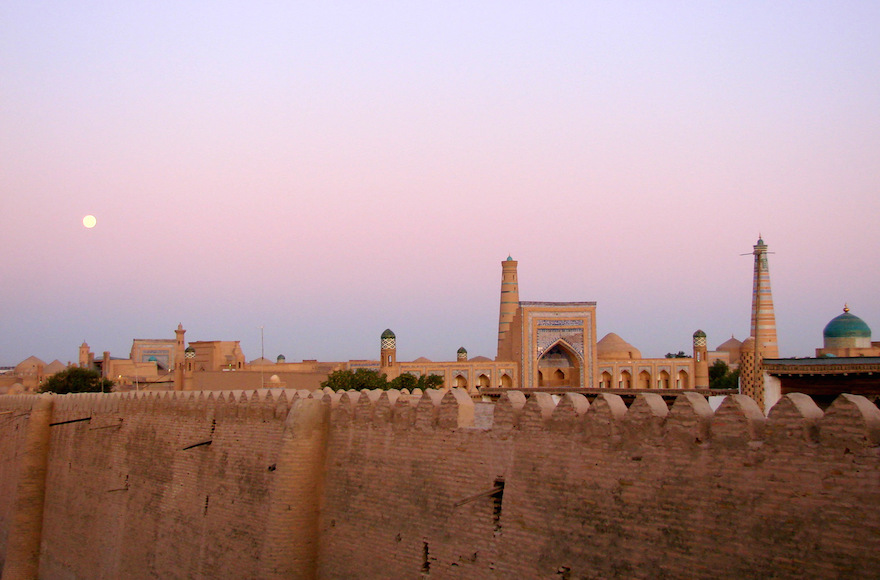 At a time when some Jews despair at the apparent depth of Muslim hatred for Jews around the world, perhaps the warmest Muslim-Jewish relations can be found, surprisingly, in the former Soviet Union.

To illustrate how devoted they are to ex-Soviet Azerbaijan, the country’s “Mountain Jews” cite the heroism of Jewish soldier Albert Agarunov — whom they refer to as a shaheed, or martyr — who was killed in 1992 during Azerbaijan’s war with Armenia over the contested enclave of Nagorno-Karabakh.

To underscore how well they are treated by their Muslim neighbors, the Bukharan Jews of Uzbekistan note that President Islam Karimov visited Israel in 1998, has opened an embassy in Israel and takes to the state-run airwaves on the High Holidays to extend best wishes to the Jewish community.

While Azeris on the street warn against drawing too many comparisons between them and the Uzbeks — their poorer Turkic brethren on the other side of the Caspian Sea, whom they view as backward — there are clear parallels from a Jewish perspective between the two largest Jewish communities in the Muslim lands of the ex-USSR.

Both Jewish communities trace their roots to Arab and Persian lands, and both received waves of Ashkenazi Jews from Eastern Europe and Russia, primarily in the late 19th and early 20th centuries.

Both live among moderate Muslim populations that are Turkic, not Arab, and are alarmed by the flourishing of Islamic fundamentalism in neighboring states: for Azerbaijan, it’s Iran; for Uzbekistan, it’s Afghanistan and Tajikistan.

And at a time when Muslims are raging against “Zionists” for the plight of the Palestinians and for Israel’s perceived role in a possible war on Iraq, the Azeri and Uzbek governments have maintained solid, if low-key, relations with Israel.

What leads to such relations? A confluence of factors, observers say.

It starts with a tolerant brand of Islam. It’s bolstered by centuries of coexistence and common destiny. It’s underpinned by the squelching of ethnic and religious identity in the former Soviet Union.

And it’s enhanced by a contemporary foreign policy in which secular presidents have set as a top priority good relations with the world’s lone superpower, the United States.

Many countries around the world believe that one of the surest routes to better relations with Washington is to win over the “Jewish lobby” in America — a notion that many Jewish leaders are reluctant to disabuse them of.

Few people in these parts are naive of the symbiosis at play.

That may explain official policy, but not grass-roots relations.

The Turks of Turkey and their Turkic cousins in Central Asia share ethnic and linguistic ties and are generally Sunni Hanifi, the most tolerant of Islam’s four strains, says Peter Golden, a historian at Rutgers University in Newark. Hanifi contrasts with the most absolutist form of Islam, the Wahabism that pervades the Arabian peninsula.

“They’re the alpha and omega, as it were,” Golden says.

The Turkic Azeris are similarly tolerant of their neighbors but actually are Shi’ite Muslims, a result of a historic tug-of-war between the Ottomans and Persians over the region.

Treated relatively well, Jews say they bonded with the land and its people.

“Not only do we live our Jewish lives but we share our language, our culture, our music, our tradition and our lives with our Azeri neighbors,” says Semyon Ihailov, chairman of the Mountain Jewish community in Baku, the Azeri capital.

Displayed on the walls of Ihailov’s small office are photos of him with Azeri President Heydar Aliyev.

Jews are frequent targets of insult in other ex-Soviet republics. In Uzbekistan, however, Jews say anti-Semitism is limited to the occasional spat with a neighbor or to off-hand remarks that blame “Jews” for things like bad weather.

Azerbaijan and Uzbekistan share the value of hospitality to visitors.

This was crucial during World War II. Hundreds of thousands of Soviets — including thousands of Jews — were evacuated to Central Asia ahead of the Nazi invaders.

“I’ll never forget how we were received and treated here,” said Sofia Berzhaner, 85, a Jew in Tashkent, the Uzbek capital, who arrived from Ukraine in 1941.

A blind but still active journalist, Berzhaner’s face lights up when she recalls those early days.

“Ordinary Uzbeks brought us bread, milk and tea,” she says. “There were great relations between Uzbeks and all who came here.”

That may have been part tradition, part political ideology.

The Soviets imposed this intercommunal respect, and brutally suppressed any expression of national or ethnic identity.

The same was true for religions.

The aggressively anti-clerical, atheistic Soviet rule ruptured Jewish practice and tradition, and some Jewish observers and moderate Muslims say the suppression had a similar effect on Islam and Muslims.

Analysts note that Iranian fundamentalists have built mosques in southern Azerbaijan, and Saudi Arabia’s Wahabis have made inroads in eastern Uzbekistan, but they have not drawn widespread adherents.

That also has much to do with current government policy.

Free of the Russian yoke, Karimov and Aliyev seem to have cast their lot with Washington, as have many other ex-Soviet republics and ex-Communist countries.

At the same time, the pair wants to avoid the experiences of their neighbors: They deny fundamentalists free rein to operate and threaten their power base.

Both also shape the media message, to the benefit of U.S. and Jewish interests. Little air time is given to the inflammatory coverage now inciting the Arab world.

There is no portrayal of Israelis “murdering” Palestinian children, or quoting of Iraqi officials asserting the U.S. and its Zionist allies are plotting “to enslave Muslims.”

If the media did, “We wouldn’t feel so comfortable here,” concedes Emanuel Shemonov, a Bukharan Jewish leader in the ancient city of Samarkand.

Washington does little to discourage these undemocratic steps, observers say.

The United States has keen interests in both countries: Uzbekistan now hosts some 1,500 U.S. troops near the border with Afghanistan; oil-rich Azerbaijan has pipeline potential.

On the other side, Israel considers relations with both countries to be important symbolically, and presses for ever-stronger ties.

“It’s very important for Israel to show that our conflict with the Palestinians is not a religious conflict,” says an Israeli diplomat in Baku. “We need to show that it’s territorial, and that we have Muslim friends in the world.