For New Greeting-Card Company, Chrismukkah Time is Here at Last 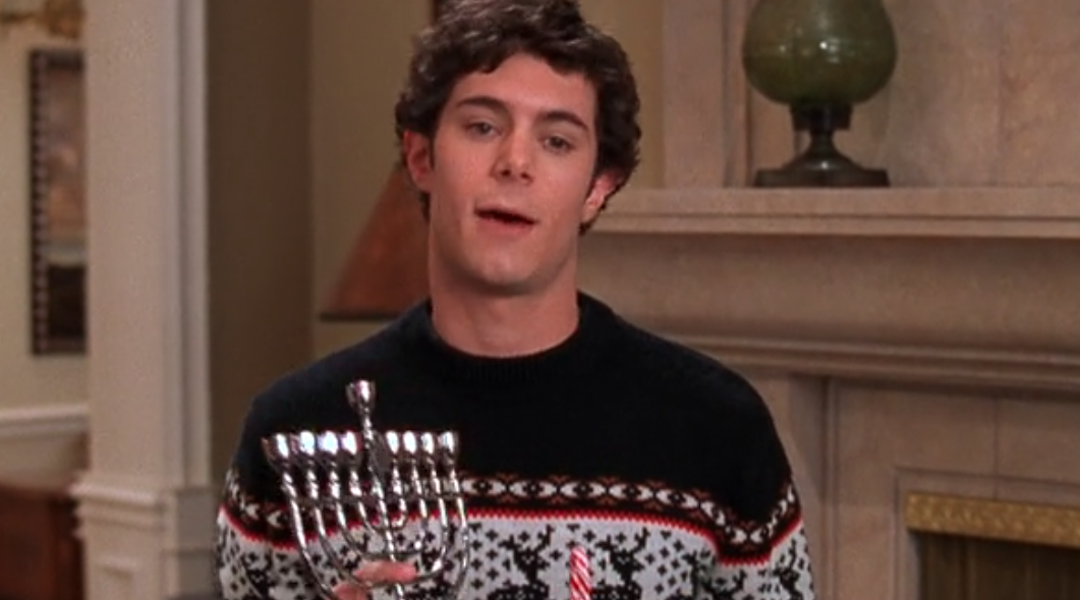 Adam Brody in the famous "Chrismukkah" episode of "The OC." (Screen shot from YouTube)
Advertisement

Some have called intermarriage the silent killer of the Jewish people — but for Minna Friedel Klug and her family, it may have been a lifesaver. “She believes they were spared only because my grandmother in Germany had married the love of her life, her next-door neighbor, just as the Third Reich was taking over,” says Klug’s grandson, Ron Gompertz. “He was Lutheran.”

Today Gompertz — himself married to the daughter of a minister in the United Church of Christ — has taken the spirit of his grandmother’s belief and given it a lighthearted spin.

Along with his wife, Michelle, Gompertz recently launched Chrismukkah.com. The site markets a line of greeting cards for interreligious families looking to harmonize the “December Dilemma,” in which mixed couples struggle with how best to celebrate their faiths’ divergent traditions — particularly when they have children.

“It’s about tolerance. It’s about understanding each other. It’s about getting along,” Gompertz says by phone, en route to the UPS drop-off site 20 miles from his rural Montana home to mail boxes of ordered cards.

And although he acknowledges that it is “not a real holiday,” Gompertz says Chrismukkah can introduce families to each other’s traditions “without being threatening or offending.”

The Chrismukkah Web site, www.Chrismukkah.com, offers about a dozen holiday cards, including one depicting a reindeer with a menorah for antlers; another in which red and white candy canes replace candles in a menorah, and another showing “Chrismukkah Man,” a rabbinic figure in a Santa Claus-like outfit.

While the Chrismukkah label is relatively new — the Gompertzes got the name from the Fox TV series “The O.C.” in which a character has a Jewish father and Christian mother — Gompertz says it refers to “the way millions of people experience the holidays together each year.”

Indeed, one-third of all Jews currently wed are intermarried, according to the 2000-01 National Jewish Population Survey. The study found that intermarriage is rising at a steady pace and stands at 47 percent.

A 2003 report by the Jewish Outreach Institute found that intermarried households may soon become a majority of homes with at least one Jewish member.

This fact is not lost on holiday card-makers, which were selling interfaith cards long before Gompertz got into the game.

“Cards are developed on consumer demand,” says Deidre Parkes, a spokeswoman for Hallmark Cards Inc. “We started with one” interfaith card “in the late 1990s, and now we have eight.”

Parkes says the company’s interfaith Christmas-Chanukah cards are typically among its top 10 best sellers marking the festival of lights.

And although these cards make up less than 10 percent of the company’s full line of some 100 Chanukah cards, melding the two religions’ winter holidays is proving profitable for other companies as well.

American Greetings Corp. offers several such cards, including one depicting a Jewish Santa Claus urging on his reindeer: “On Isaac! On Izzy! On Eli! On Abe! On Levi! On Morty! On Shlomo! On Gabe!” Inside, the card wishes the recipient a “Merry Hanukkah.”

For its part, the Chrismukkah site welcomes visitors to “the one place where you don’t have to choose. Here you can have it all! Here we celebrate Chrismukkah!”

But Nancy Berglass, a Jewish woman in Los Angeles who is married to an African American Christian man, finds such cards amusing. “I say more power to them,” she says.

Berglass and her husband are not raising their two young children in either faith in particular — she speaks of “a blending of our two religious, cultural legacies”– and they light Chanukah candles and give gifts on both holidays.

“The only reason we do any of this is that it is commercially and culturally the norm in our country and we don’t want our children to feel excluded,” Berglass says. “What that means to our kids is a ton of presents: eight on Chanukah — and for Christmas they get whatever’s on sale at Marshall’s.”

Over the course of the rest of the year, she says, “We tell our children that they’re Jewish and we tell them that they’re African American, and that they’re so lucky that they get to be both of those things.”

Not everyone’s as supportive of interfaith holiday celebrations. One e-mail sent to Gompertz denounces Chrismukkah as “disgusting and insulting to both Jews and non-Jews alike.”

Still, Gompertz says, positive e-mail responses have outnumbered negative ones by about a 10-1 ratio, and the site offers the following disclaimer: “We respect people’s different faiths and do not suggest combining the religious observance of Christmas and Hanukkah.”

In a recent survey by the InterfaithFamily.com Web site, more than two-thirds of respondents said they kept their holiday celebrations separate. About 80 percent, though, said they celebrated both Christmas and Chanukah.

Although the Gompertz’s cards are selling well — 12-packs of the “Chrismukkah Bush” and “Oy Joy” varieties have already sold out — Gompertz insists he’s not in it for the money.

“No matter how many Chrismukkah cards we sell this year, we’re not going to make any money,” says Gompertz. “It’s about encouraging a dialogue. Interfaith marriage in America is one of the last cultural taboos. It doesn’t get talked about much.”