Latke Oil Doesn’t Mix with the Wreaths of Christmas 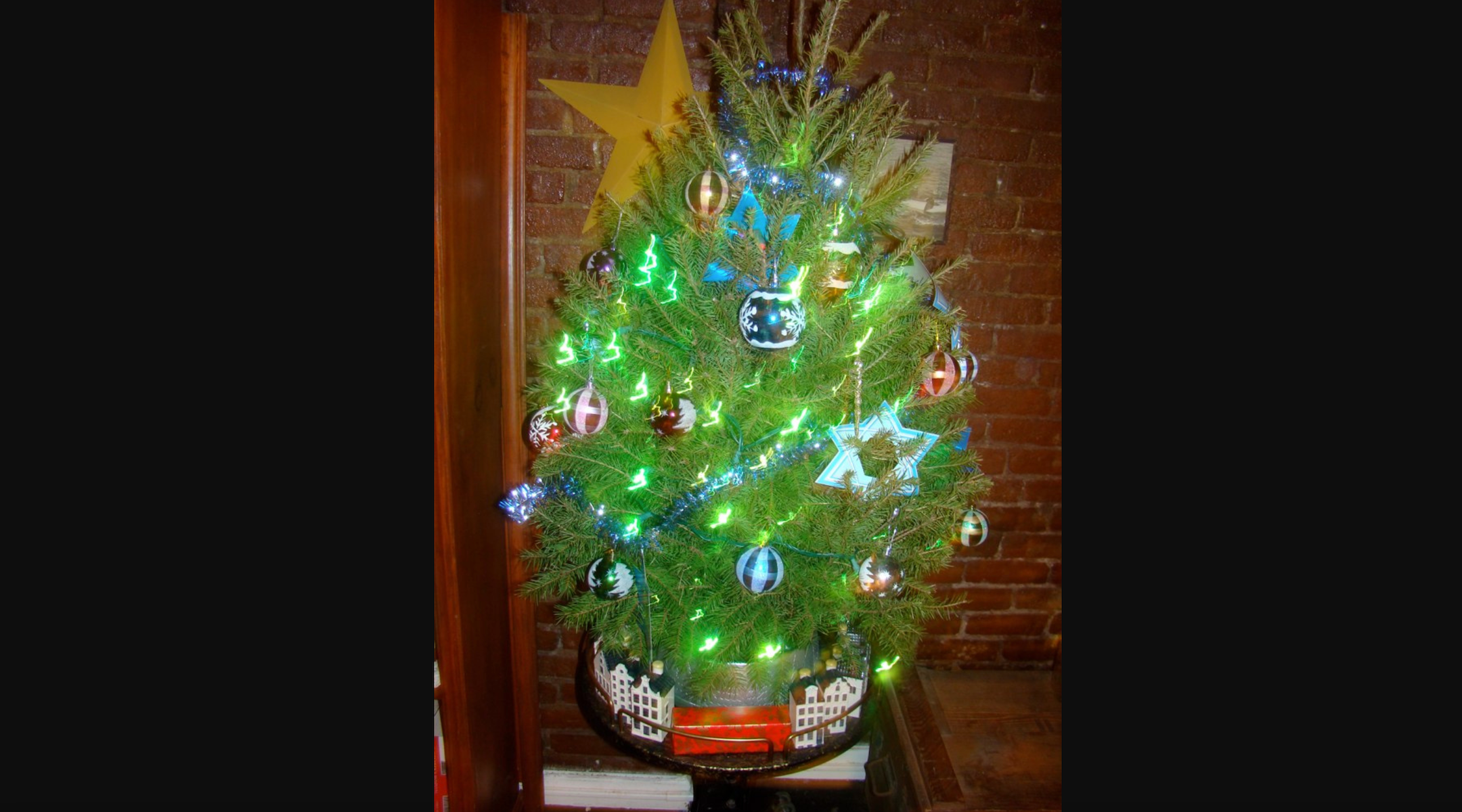 “Look, elves spinning dreidels,” my son Danny, 9, says as we pull up to the cleaners in full view of their freshly painted holiday window.

“And Santa hanging a Star of David ornament on the tree,” Jeremy, 11, adds.

Where you can buy a blue-and-white, dreidel-decorated Chanukah wreath or send an electronic interfaith card featuring a Santa Claus and an observant Jew sledding downhill over a “Happy Whichever!” greeting. Where you can read about “Chanukah Harry,” who takes over Santa’s delivery duties when Santa takes sick, directing the reindeer in Yiddish.

“No, it’s an attempt to make money, to appeal to everyone,” explains Zack, 16. “It’s what America is all about.”

Increasingly, our country’s entrepreneurs are cashing in on the growing number of interfaith families, with estimates of more than 50 percent of all Jews marrying outside the faith, and there are a growing number of unaffiliated and secular Jews who often view Christmas as a national holiday with little or no religious significance.

“I find this mingling of holidays odd,” says my friend Ruth Ickowitz, a Christian married to a Jew, committed to raising her children Jewish.

It’s indeed odd. And ironic, since Chanukah is the holiday in which we Jews specifically commemorate our refusal to assimilate.

Many Jews willingly capitulated, merging into the prevailing Hellenistic society. But the aged priest Mattathias and his five sons, including Judah the Maccabee, refused to renounce their Jewish ways. They, along with other stalwart and even some undecided Jews, revolted against the demonstrably more powerful Syrian-Greek army, miraculously defeating them.

But here we Jews are now in 21st-century America, under no threat more menacing than peer pressure, not only blithely kowtowing to the dominant Christian culture but also willingly throwing our Chanukah symbols into this new ecumenical eggnog.

“Most of these people, those creating these decorations and those buying them, must have no clue what either holiday really means,” Ruth surmises.

No clue. Because aside from the fact that both Chanukah and Christmas likely originated from some winter solstice holiday, they have nothing in common. Christmas celebrates the birth of Jesus, the Christian messiah, while we Jews believe that the Messiah has not yet come.

No clue. Because the Christmas symbols that so many Jews willingly usurp or meld into a uni-holiday hybridization are the very symbols that have been used to tyrannize and persecute us for thousands of years.

Take the Christmas tree, for example, which many Jews insensitively co-opt, sometimes incongruously calling it a Chanukah bush. As an evergreen, the tree symbolizes Jesus’ immortality, depicting him as the “tree of life.” It is also a reminder of the wood used for the cross on which he was crucified (and on which, according to some sources, we symbolically and ignorantly “knock on wood”).

How about the Christmas wreath, available now in a Chanukah motif? The wreath symbolizes the crown of thorns placed on Jesus’ head by the Roman soldiers before he was crucified. It signifies his pain and suffering, the red berries representing drops of blood.

And even Santa Claus, a seemingly benign character, is modeled on St. Nicholas, a fourth century C.E. Catholic saint and bishop, the patron of little children.

“Mom,” Zack suggests, “why don’t you use the cleaners’ pickup and delivery service? Then you won’t have to look at the window.”

“I wouldn’t mind if the holiday decorations were side by side,” I answer, explaining my support of the seemingly politically incorrect but historically accurate doctrine of “separate and unequal.”

Yes, unequal since Chanukah is a minor holiday not only on the Jewish calendar but also in comparison to Christmas, as Ron Wolfson, professor at the University of Judaism in Los Angeles, says: “It is not a major event in the Jewish holiday cycle and has never, until recently, been viewed as a central celebration for the Jewish people. Therefore, the customs and ceremonies surrounding Chanukah pale by comparison to those of Christmas — which is one of the two major holidays of Christanity.”

Therefore, even though some may object, I believe “I Have A Little Dreidel” cannot compete with “Come All Ye Faithful.” The menorah, no matter how beautiful or how tall, can’t match the splendor and brilliance of a Christmas tree. And the commemoration of a single military victory can’t equal the birth of Christianity’s savior.

As Jews, we don’t have to ignore Christmas. On the contrary. My husband, Larry, and I will drive our sons down Los Angeles’ Candy Cane Lane to view the annual award-winning Christmas decorations. We will give Christmas presents to our Christian friends. We will invariably and repeatedly say, “Christmas is a beautiful holiday. But it’s not our holiday.”

But more importantly, at sundown on Dec. 21, amid family and friends, we will celebrate our holiday. We will light our menorah, fry our latkes and exchange our gifts. We will profusely thank the Maccabees for fighting for our religious freedom, and we will proudly belt out all the verses — inharmoniously and uninhibitedly — to “I Have A Little Dreidel.”

Jane Ulman lives in Encino, Calif., with her husband and four sons.