Election 1998: Questioning What is out of Bounds when Reaching out to Jewish Voters 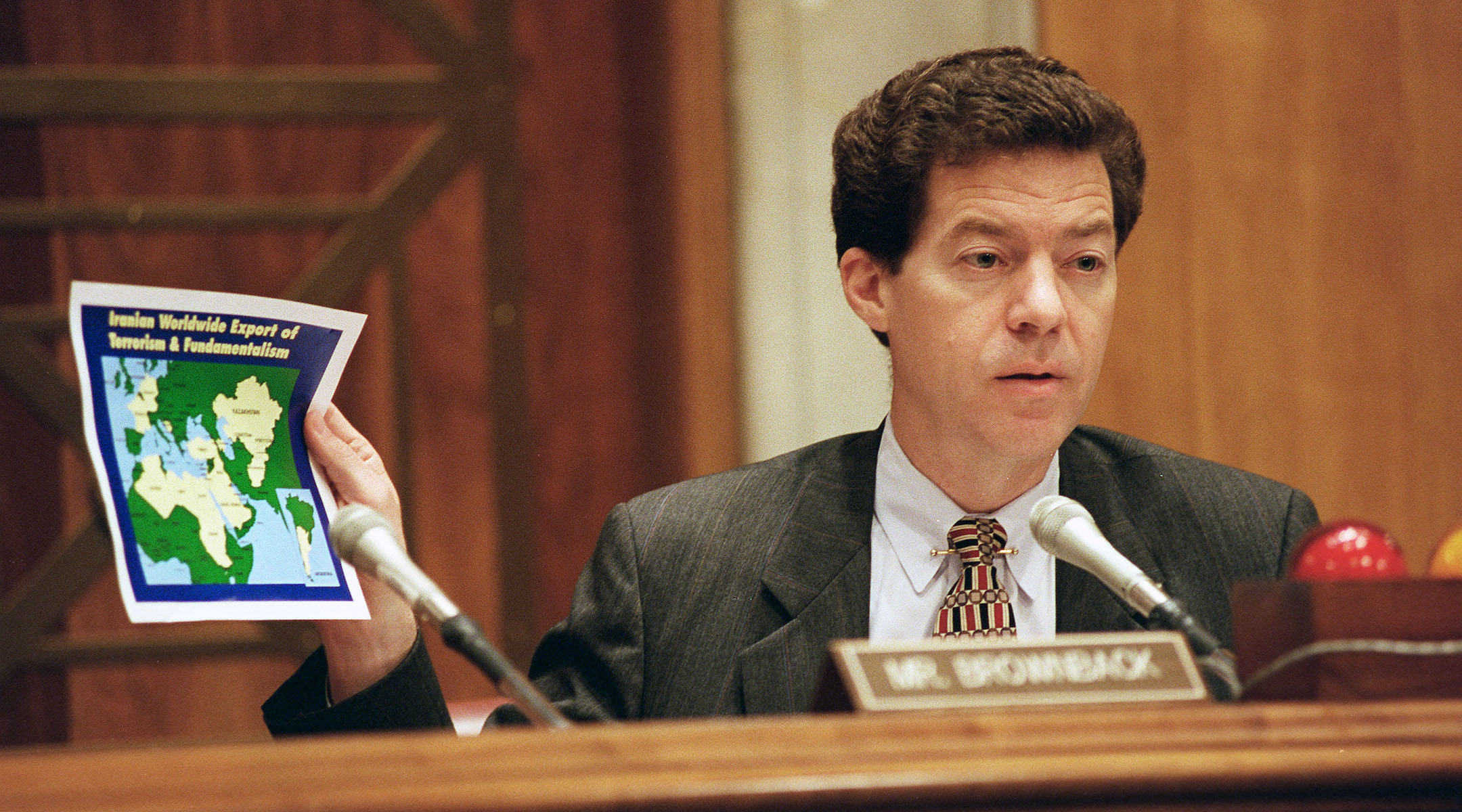 “We think it’s important for people to know that Jill Docking is Jewish. Please vote for Sam Brownback.”

That is the phone call a handful of Kansas voters say they received in the days before Brownback won his 1996 race for the Senate.

In a world of no-holds-barred campaigns, many political activists fear that the anti-Jewish outreach, although so far rare, could be a harbinger of campaigns to come.

With Election Day less than four months away, 1998 is shaping up to be a bruising battle as Republican candidates seek to retain the slimmest majority in the House of Representatives.

A gain of 11 seats would put a Democrat back in the speaker’s chair.

With 34 seats in the Senate up for election, Democrats admit they have virtually no chance of regaining control and instead talk of fighting to prevent the GOP from winning a filibuster-proof 60 seat margin or maybe picking up a few seats to position themselves for a 2000 run at the majority.

Many high-profile Jewish candidates, including Sen. Barbara Boxer (D-Calif.) and Rep. Jon Fox (R-Pa.), who won his last election by fewer than 100 votes, are running for their political lives in races where Jewish issues such as the standoff with Swiss banks over Holocaust assets are already playing a role.

At the same time Republicans, who historically have struggled to attract Jewish support, have launched an unprecedented drive to help their party’s candidates reach out to Jewish voters.

Against this backdrop, the Kansas race, though two years old, has emerged as a hot topic on the Jewish campaign scene in light of new details about the incident publicized by a Jewish Democratic group.

In all tight races minority communities take on increased significance and any attack on a candidate’s race or religion can swing voters.

This has raised the timeless question of what is in bounds and out of bounds when candidates or their supporters reach out to Jewish — as well as non- Jewish — voters.

“People should be elected because of the positions they take,” said Jess Hordes, the Washington representative of the Anti-Defamation League.

“I do not think a candidate’s Jewishness ought to come into play.”

As campaigns seem to turn nastier and more personal with each election cycle, activists of all political stripes say that the Kansas race stands out as an example of out-of-bounds election schemes.

In the Brownback incident, no evidence has emerged to tie the senator or his campaign to the calls. And the senator and his staff called local Jewish institutions at the time to condemn the effort to besmirch his Jewish opponent.

But other questions arise: Should Brownback, who is up for re-election this year, have publicly condemned and investigated the calls in the waning days of the campaign when Docking herself decided to keep quiet to avoid splashing her Jewishness across the front pages of rural newspapers?

Whether orchestrated by Brownback supporters, as the National Jewish Democratic Council has charged, or Docking supporters hoping to reap an anti-Brownback backlash, as some Republicans charge, the calls reflect, political analysts believe, a re-emergence of anti-Jewish campaign tactics that have not been seen in 20 years.

Brownback is up for re-election again this fall because in 1996, he won only a two-year term to serve out Bob Dole’s tenure after Dole resigned from the Senate to challenge President Clinton for the presidency.

Already, Brownback’s expected opponent, Paul Feleciano, who is not Jewish, has revived the Docking incident to charge that the senator or his campaign used an anti-Semitic tactic.

Despite the lack of evidence tying Brownback to the 1996 incident, the National Jewish Democratic Council believes it is fair game to use the incident against him.

Ira Forman, executive director of NJDC, when asked if using the incident against Brownback was out of bounds, said, “No. Not by campaign standards today.” NJDC last month published a report on the Kansas incident that stopped short of tying Brownback to the calls.

To the National Jewish Coalition, a Republican group that is quick to point out that NJDC’s political action committee gave Docking $9,150, that strategy is no better than the anti-Semitic calls.

“This is the worst kind of gutter politics,” said Matt Brooks, executive director of the National Jewish Coalition.

As Democrats and Republicans continue to bicker over what’s fair play in an election season, most agree that future Jewish candidates are likely to face similar tactics unless those responsible are exposed and publicly condemned.

But if history is any lesson, even if there is exposure, there are no guarantees that the methods will stop.

Political consultant Arthur Finkelstein has the dubious distinction of being the first to test whether voters would respond negatively to Jewish candidates.

Finkelstein, a much sought-after Jewish pollster who crafted the image that is credited with helping Benjamin Netanyahu become Israel’s prime minister, conducted a poll in 1978 on behalf of Carroll Campbell Jr. in a South Carolina congressional race.

Using a question widely seen as anti-Jewish, Finkelstein wanted to see whether the fact that Campbell’s opponent, Max Heller, was Jewish would affect voters.

After Heller’s religion became an issue with the help of a third party candidate — who pointed out in a debate that “Heller doesn’t believe in Jesus Christ” — Campbell’s polling numbers improved and he went on to win the House seat.

In the Kansas case, a similar strategy may have been doomed from the start, say local activists. Many of the known phone calls were made in an area that had already elected Dan Glickman, a Jewish member of Congress who represented the district until he became President Clinton’s secretary of agriculture.

The Brownback incident aside, most campaigns involving Jewish candidates never touch directly on a candidate’s Jewishness. Instead there are more veiled attacks on a candidate’s position on foreign aid and Israel, hinting at charges of dual loyalty.

Rep. Bob Filner (D-Calif.), for example, came under fire at a 1992 debate for being a better friend of the Golan Heights than the local heights in his district. He was also accused of speaking Hebrew instead of Spanish, the language of many of his constituents.

“If candidates in the course of their campaign show an insensitivity to — or attempt to tar a candidate — based on race, religion or ethnic background, it’s the worst kind of behavior in politics and that’s unacceptable,” said Hordes of ADL.

“If one is identified with a particular religious viewpoint it may be appropriate at some point” to raise questions, Hordes said.

With Southern Baptists moving forward with plans to convert Jews, questions could come from Jewish audiences to measure their support for the effort.

But others disagree, believing that religion should be left out of the debate unless the candidate raises the issue.

“A politician does have a public and a private life. Religion is part of the private life,” said Frank Luntz, a prominent Republican political consultant.

But that does not mean that issues that touch on religious belief are out of bounds for debate, said Luntz, who has created for the National Jewish Coalition 25 pages of guidelines to teach Republican candidates how to talk to Jewish voters.

Using the findings from focus groups, the Republican Jewish group is asking candidates to address Jews on a wide range of issues from Israel to abortion.

Jews want moral issues “stripped of any overtly religious references,” according to the summary of the talking points provided by NJC.

The statement, “Communicating Republican Policy to Jewish Americans” urges candidates to express support for Israel as a friend not an ally because “allies come and go but friendship lasts forever.”

The strategy also looks to the presidential race in 2000, urging candidates to play upon what their testing found to be current Jewish concerns about the Clinton administration’s pressure on Israel.

“Israel is perhaps the most potent issue out there” for Jewish voters, said Luntz, the architect of the Republican’s 1992 Contract with America.