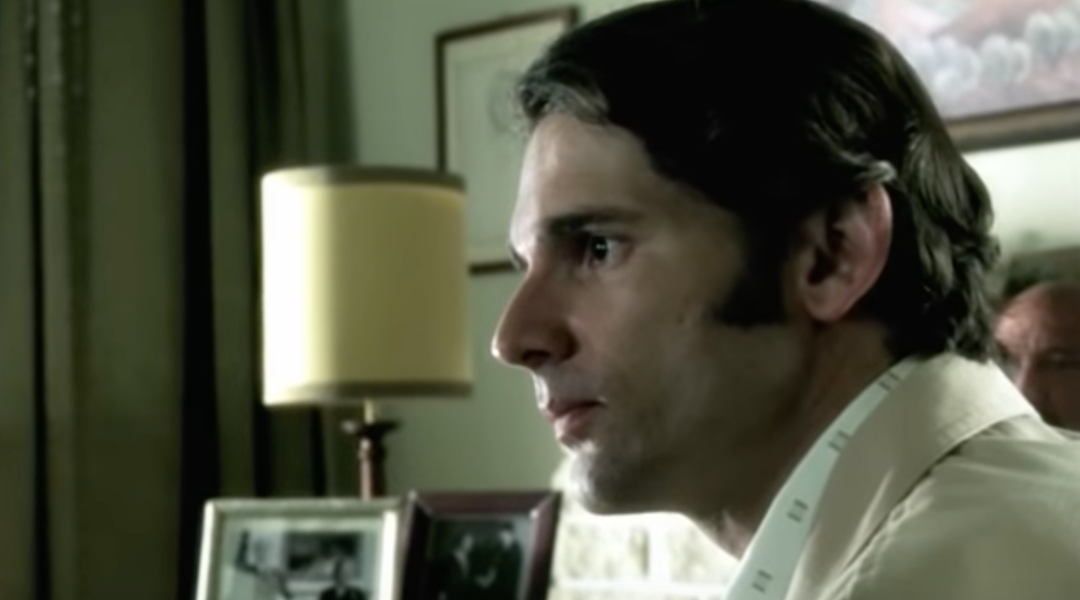 “Munich.” Rarely in the annals of motion pictures have keen minds written and speculated so much about a movie they haven’t seen. All the buzz and fuss isn’t about the quality, pacing, acting, music and cinematography of the movie. After all, the label “a Steven Spielberg film” is a Hollywood gold standard, the source of mega-hits from “Jaws” to “Schindler’s List” to “Saving Private Ryan.”

The interest in ‘Munich’ looks deeper than that. For one, it’s about a filmmaker’s obligation to historical fact. At the most profound level, it confronts the old and new question of how war and terrorism transform the perpetrator and, even more, the one who takes up arms to oppose evil.

The film opens with still-haunting black-and-white television footage from the 1972 Olympics in Munich, as newscaster Jim McKay reports on the capture, and eventual murder, of 11 Israeli athletes and coaches by Palestinian Black September terrorists.

When a botched attempt by German police to rescue the Israeli hostages fails, we hear McKay’s somber, “It’s all over, they are all gone.”

Although there are flashbacks to the massacre throughout the film, the main focus shifts to a meeting between Israeli Prime Minister Golda Meir and her top military and intelligence leaders.

The decision is made to send a Mossad team to Europe to hunt down and assassinate 11 of the massacre’s participants and planners.

Tapped to lead the team is agent Avner Kauffman (Eric Bana), son of a Holocaust survivor (Gila Almagor), whose wife is expecting the couple’s first baby.

From this point, the two-and-half-hour film incorporates three storylines.

The first is that of a first-class action thriller, as the squad tracks and hunts down its targets in Italy, France, England and Spain. There are some hits, some misses, lots of explosions and shootings, James Bond capers, a few car chases and a bit of sex.

All along, Avner is fed tips, in exchange for hefty payments, by a mysterious Frenchman with seemingly unlimited contacts, who may also be a double agent.

The movie’s second storyline centers on the interactions among the team’s five members, and occasionally with their hard-nosed Mossad boss in Tel Aviv (Geoffrey Rush).

At first, they talk shop about the technical aspects of their job, but as some of their hits lead to overkill, the discussions turn more subtle and intense.

Some wonder if there is a moral dimension to their work, and if this is in conflict with millennia of Jewish history and teaching.

The concerns of the “moralists” are followed by those of the team’s “pragmatists,” who ask if the constant cycle of attack, retaliation and counterretaliation will ever lead to a solution.

Spielberg has said repeatedly that this question is at the top of his mind and he cleverly stresses the point by alternating headlines of a terrorist airport bombing, a Mossad assassination, and a plane hijacking.

“I am always in favor of Israel responding strongly when it’s threatened,” the filmmaker told Time Magazine. “At the same time, a response to a response doesn’t really solve anything. It just creates a perpetual-motion machine.”

A third subplot, relatively brief but central to Spielberg and screenwriter Tony Kushner, is a confrontation between Avner and Ali, the young leader of a PLO squad, in which the aims and justifications of the Palestinian’s violence are discussed.

The encounter, while polemical, is a well-handled piece of theater, and as an Israeli official who has seen the movie put it, “There isn’t a Palestinian spokesman who could express his case in three minutes as well as Ali.”

Throughout, Avner — not an especially introspective type — remains mission-oriented. He is, however, beginning to be torn between the voice of his mother, who tells him that he is the kind of man the victims of the Holocaust prayed for, and the pull of his wife and new-born child.

In the end, Avner demands to know whether all the men he has killed were actually involved in the Munich massacre, but receives no direct answer.

Since “Munich” started filming last June in Malta and Budapest, it has been shrouded in a blanket of secrecy, which only now is beginning to be lifted ahead of its limited rollout on Dec. 23.

Because of, or despite, the news blackout, there has been a constant stream of critical reports from Israel, most denouncing the historical inaccuracy of the film.

“This is simply fiction, not a documentary,” said Ehud Danoch, Israel’s consul general in Los Angeles and one of the few Israelis to have seen “Munich.”

High-ranking Israelis, in and out of the Mossad, have expressed astonishment and annoyance that not one had been consulted by Spielberg or Kushner, and neither has Prime Minister Ariel Sharon’s office, which oversees the intelligence service.

It is not clear if the filmmakers would have received any cooperation, since Israel has never acknowledged that it carried out the post-Munich reprisals.

Also, within Israel the book cited by the filmmakers as a main source, “Vengeance” by George Jonas, has been widely discredited.

“The man who came to Jonas and represented himself to be, in effect, the Avner character of the movie, was actually never in the Mossad and only served a few months as an El Al security guard,” said a knowledgeable Israeli official, who spoke on condition of anonymity.

He cited a number of obvious technical inaccuracies, but what most upset the official was the depiction of some of the Mossad agents’ actions.

“You can argue that violence begets violence, but there is a line our security officers will not cross and that is the ethos of the purity of arms,” said the official, himself a former officer in the Israel Defense Forces. “The IDF is the most moral army in the world.”

It also is Israel that has consistently sought peace, and thus an end to violence, he added.

After seeing “Munich,” the official drew an unfavorable comparison to the controversial film by Mel Gibson, “The Passion of the Christ.”

“In ‘The Passion’ you have two short scenes which make the Jews look bad,” he said. “But in ‘Munich’ some Jewish characters are depicted badly from the beginning to the end.”

Also displeased with the portrayal of the Mossad agents is historian Michael Oren, who told The New York Times, “It’s become a stereotype, the guilt-ridden Mossad hit man. I don’t see Dirty Harry feeling guilt-ridden. Somehow, it’s only the Jews.”

An intriguing question is raised by Calev Ben-David of The Israel Project, writing in The Jerusalem Post in the form of a letter to Spielberg.

“What I really suspect, Steven, is that you are using ‘Munich’ as a means of commenting, in your own way, on the situation of the United States in a post-9/11 world,” Ben-David writes.

“But by setting those concerns against the backdrop of the Israeli-Palestinian conflict, you cleverly sidestep having to contend with the kind of overwhelming backlash you would face if your movie made any direct politically charged controversial statements about America’s own current war on terror.”

Whether the point is valid or not, it is interesting that “Munich’s” final scene shows Avner walking along the New York waterfront, with the World Trade Center’s Twin Towers clearly silhouetted in the background.

The criticism of “Munich’s” historical accuracy may be accurate, but Spielberg tries to make this an issue of little importance by making no claim to his film being a literal recreation of the historical events. The film is clearly labeled as “inspired by real events” and the director and writer have referred to the contents as “historical fiction.”

What may be of more fundamental importance is whether Israel and her supporters are better served by movies that portray its agents as robotic, “I’m only following orders,” hit men — or as men with feelings, conscience and doubts. To ask the question is to answer it.

University of Judaism scholar Michael Berenbaum observed after seeing the fascinating, but “long and draining” film:

“I am prouder of a man who undertakes a violent mission and is tortured by it than one who doesn’t give it a second thought. … If you are transformed by such an experience, that is the price you pay for what you have to do,” he said.

Berenbaum warmly praised “Munich” as a theatrical experience, “which is the first duty of the filmmaker, as we have a responsibility to be open to the art.”

Whatever the debating points on “Munich,” we can be certain they will be batted about for a long time.

A book by Time reporter Aaron J. Klein is coming out, arguing that the Mossad eliminated only minor activists in the Olympic massacre, but missed most of the major ones.

Two additional books are in the works in Israel, and seven networks, among them the BBC, are reported to be preparing documentaries on the making of “Munich.”