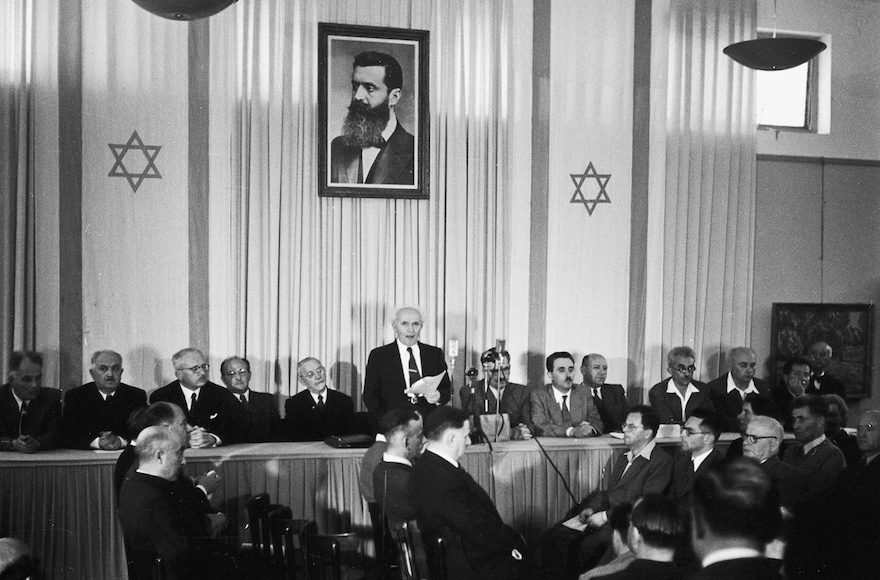 The full text of the state of Israel’s “proclamation of Independence,” released here today by the Provisional Jewish Government, follows:

The Land of Israel was the birthplace of the Jewish people. Here their spiritual, religious and national identity was formed. Here they achieved independence and created a culture of national and universal significance. Here they wrote and gave the Bible to the world.

Exiled from Palestine, the Jewish people remained faithful to it in all the countries of their dispersion, never ceasing to pray and hope for their return and restoration of their national freedom.

Impelled by this historic association, Jews strove throughout the centuries to go back to the land of their fathers and regain statehood. In recent decades, they returned in their masses. They reclaimed a wilderness, revived their language, built cities and villages, and established a vigorous and ever-growing community, with its own economic end cultural life. They sought peace, yet were ever prepared to defend themselves. They brought blessings of progress to all inhabitants of the country.

In the year 1897 the first Zionist Congress, inspired by Theodore Herzl’s vision of a Jewish state, proclaimed the right of the Jewish people to a national revival in their own country.

This right was acknowledged by the Balfour Declaration of November 2, 1917, and reaffirmed by the mandate of the League of Nations, which gave explicit international recognition to the historic connection of the Jewish people with Palestine and their right to reconstitute their national home.

The Nazi holocaust which engulfed millions of Jews in Europe proved anew the urgency of the re-establishment of the Jewish state, which would solve the problem of Jewish homelessness by opening the gates to all Jews and lifting the Jewish people to equality in the family of nations.

Survivors of the European catastrophe as well as Jews from other lands, claiming their right to a life of dignity, freedom and labor, end undeterred by hazards, hardships and obstacles, have tried unceasingly to enter Palestine.

In the Second World War, the Jewish people in Palestine made a full contribution in the struggle of freedom-loving nations against the Nazi evil. The sacrifices of their soldiers and efforts of their workers gained them title to rank with the people who founded the United Nations. On November 29, 1947, the General Assembly of United Nations adopted a resolution for re-establishment of an independent Jewish state in Palestine and called upon inhabitants of the country to take such steps as may be necessary on their part to put the plan into effect.

U.N. RECOGNIZED RIGHT OF JEWISH PEOPLE TO SET UP STATE

Accordingly we, the members of National Council, representing the Jewish people in Palestine and the Zionist movement of the world, met together in solemn assembly by virtue of the natural and historic right of Jewish people and of resolution of the General Assembly of the United Nations:

Hereby proclaim the establishment of the Jewish state in Palestine, to be called Israel.

We hereby declare that as from the termination of the Mandate at midnight this night of the 14th to 15th of May, 1948 and until the setting up of duly-elected ?bodies of the state in accordance with a constitution to be drawn up by by a constituent assembly not later than the first day of October, 1948, the present National Council shall act as the Provisional State Council, and its executive organ, the National Administration, shall constitute the Provisional Government of the state of Israel.

The state of Israel will promote the development of the country for the benefit of all its inhabitants; will be based on precepts of liberty, justice and peace taught by the Hebrew prophets; will uphold the full social and political equality of all its citizens without distinction of race, creed or sex; will guarantee full freedom of conscience, worship, education and culture; will safeguard the sanctity and inviolability of shrines and holy places of all religions; and will dedicate itself to the principles of the Charter of the United Nations.

The state of Israel will be ready to cooperate with the organs and representatives of the United Nations in the implementation of the resolution of November 29, 1947, and will take steps to bring about en economic union over the whole of Palestine.

We appeal to the United Nations to assist the Jewish people in the building of its state and admit Israel into the family of nations.

In the midst of wanton aggression we call upon the Arab inhabitants of the state of Israel to return to the ways of peace and play their part in the development of the state, with full and equal citizenship and due representation in all its bodies and institutions, provisional or permanent.

We offer peace and amity to all neighboring states and their peoples, and invite them to co-operate with the independent Jewish nation for the common good of all. The state of Israel is ready to contribute its full share to the peaceful progress and reconstitution of the Middle East. Our call goes out to the Jewish people all over the world to rally to our side in the task of immigration and development, and to stand by us in the great struggle for the fulfillment of the dream of generations — the redemption of Israel.

With trust in Almighty God, we set our hands to this declaration at this session of the Provisional state Council in the city of Tel Aviv this Sabbath eve, the fifth day of Iyar, 5708, the fourteenth day of May, 1948.