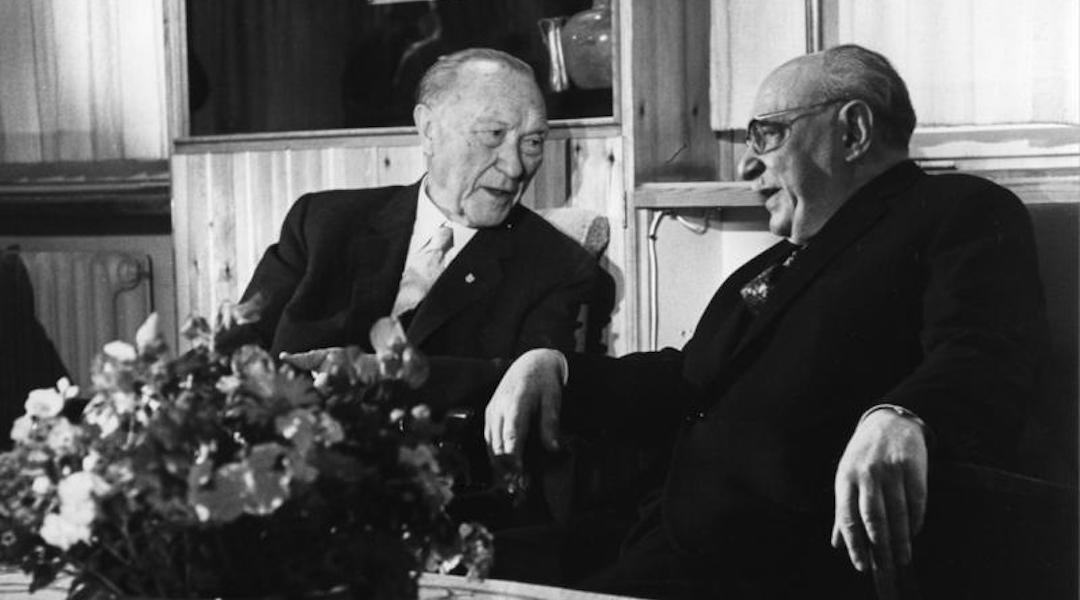 The German-Jewish reparations talks which opened here Friday in historic Washington Castle in the suburb of Wassenaar will be resumed tomorrow and will last two weeks. Then, they will be recessed to give the German delegates an opportunity to return to Bonn for further instructions from their government on the amount which West Germany is ready to pay.

Tomorrow the Israeli and Jewish delegations will start detailing their claims against West Germany and presenting the bases upon which the claims rest. The procedure followed tomorrow–and every day of the negotiations parley–will be that the Germans will meet with the Israel delegates in the morning and the non-Israeli Jewish delegation in the afternoon. There will be no meetings on Saturdays and Sundays.

The German delegation, in its opening statement Friday morning before the Israeli delegation and repeated later before the delegation of the Conference on Jewish Material Claims Against Germany, pointed out that it had been instructed by the West German Government to reaffirm the declaration on Jewish restitution made by Chancellor Konrad Adenauer in the Bonn Parliament last September.

“We are aware that this involves more than merely obligations to make material amends, “Prof. Franz Boehm, head of the German delegation said. He then emphasized that certain facts warranted the division of the negotiations into several stages. He pointed out that:

1. Allied legislation in Germany restricts the transfer or supply of goods to foreign creditor countries.

2. The financial capacity of the West German Republic is limited in view of the total amount of her liability. The first and most important thing is that the obligations undertaken by the German Government–as far as they are to be met in foreign exchange or in the supply of goods–should be coordinated with the final overall settlement of the problem of German debts.

The objective of the first stage of the negotiations, Prof. Boehm continued, is to detail the different categories of the Israeli and Jewish claims. This, he declared, would have to include the relations between the claims and other liabilities of the West German Republic, especially liabilities to individual claimants.

The head of the German delegation then gave his government’s assurances that the Israeli and Jewish claims will receive “most careful consideration.” He added that upon the conclusion of the first stage of the negotiations, the Bonn Government will decide whether the extent of the claims can be met within the scope of Germany’s financial capacity and the overall settlement of German debts.

Prof. Boehm emphasized that his drawing the attention of the Israeli and Conference delegations to Germany’s limited financial capacity is not due to an unwillingness to make amends for past wrongs, but to the fact that full restitution is beyond Germany’s ability at present. He expressed the hope that Germany’s current efforts to remedy the damage done to the Jewish people will be seen as proof of her “earnest and sincere” desire to render reparations.”

The Israeli delegation emphasized in its opening statement that “it must be clearly understood that satisfaction of Israel’s claims is not regarded as constituting in any way expiation of the fearful holocaust with 6,000,000 Jews murdered in Europe and the destruction of ancient Jewish communities and their precious spiritual possessions. These losses, “the Israel spokesman declared, “cannot be made good by any material recompense. The Israel claim is thus minimal in size and symbolic in character. To settle the historic account, the hour is not yet come.”

The Israeli delegation opened by presenting the full text of Israel’s note of March 12, 1951 to the four Western Powers in which it set out claims of $1,500,000,000 against Germany as the cost of resettling Nazi survivors in Israel. It announced that Israel’s demands were based on this note, on Chancellor Konrad Adenauer’s statement to the Bonn Parliament and his letter to Dr. Nahum Goldmann, chairman of the Conference on Jewish Material Claims Against Germany.

The statement pointed out that the Israel claim was not related to the real value of the Jewish property looted by the Nazis but was based on the expenditure incurred by Israel in resettlement of Jews who escaped the Nazi terror. While $1,500,000,000 is claimed from Germany as a whole, it declared, the portion claimed from the West German Federal Republic was one billion dollars.

The statement said it will be the endeavor of the Israel delegation to secure payment of collective recompense as affirmed in the Israeli notes of March 12 and Nov. 30, 1951 which, it said, were endorsed by the entire Jewish people as represented by the Conference on Jewish Material Claims Against Germany. “The Israel delegation,” it added, “enters these negotiations in the earnest expectation that they will result in full, early settlement of this claim.”

Moses A. Leavitt, vice-chairman of the American Joint Distribution Committee, who heads the delegation representing the Conference on Jewish Material Claims, told the German delegates at the opening of the negotiations that it was their responsibility to implement in practical and concrete terms the declaration made by West German Chancellor Konrad Adenauer before the Bonn Parliament.

Mr. Leavitt pointed out that while the Conference delegates are prepared to negotiate on Jewish material claims, it must be clear from the very beginning that there cannot be any negotiations on moral claims. It is for posterity to judge whether such amends could be made, he stated. He stressed the fact that the Conference wants the German Government to assume full responsibility for the discharge of restitution liabilities of the Third Reich and requested the enactment of indemnification and restitution laws for the whole of Germany.