Gun Control is a Moral Issue and a Jewish Issue, Moms Say 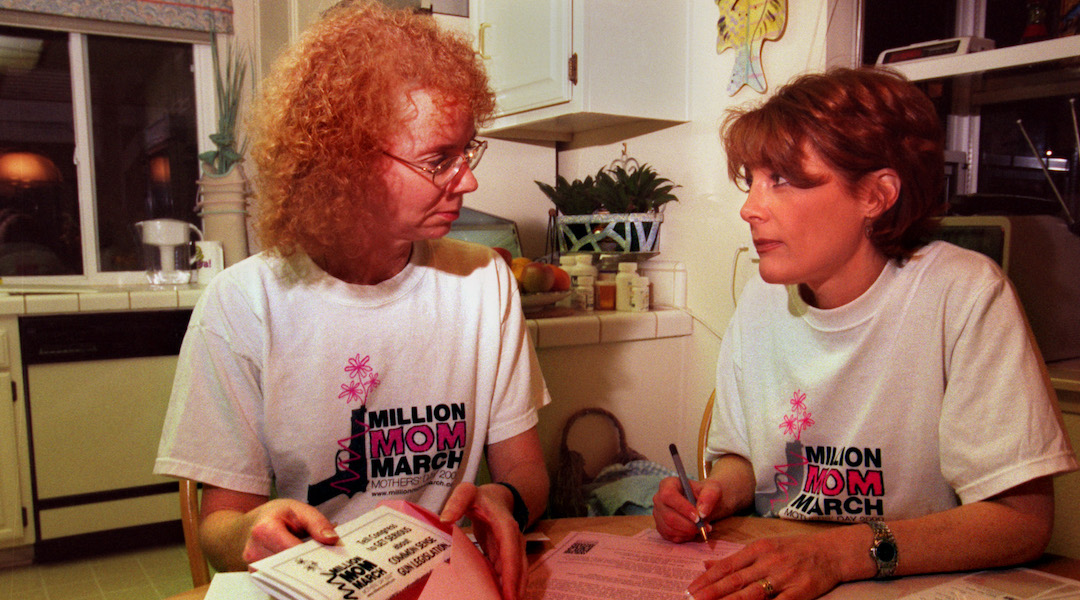 Jewish mothers have joined with moms from across the country to give Congress an earful in support of gun control and safety legislation.

Standing on the National Mall within view of Capitol Hill, members of synagogues and Hadassah chapters demonstrated with thousands of others on Sunday, Mother’s Day, to call on Congress to enact “sensible gun control laws.”

Million Mom March supporters want background checks at gun shows, registration of firearms and licensing of gun owners, as well as safety locks on handguns. Congress’ inaction on the issue is unacceptable, they say, pledging to make gun policy an issue in the November elections.

“We have a moral obligation that emanates from Torah and God. Today is the day to make our legislators listen.”

The Jewish community appears galvanized and mobilized around gun control, perhaps as a result of last August’s shooting at the North Valley Jewish Community Center in Grenada Hills, Calif.

That incident, with the nationally televised images of a daisy chain of children being led away from the center by policemen, actually gave Donna Dees- Thomases the idea for the Million Mom March.

Legislators in Washington, however, are unlikely to do more than listen as the chance of any gun control legislation passing this session is minimal. A major bill on gun control has been languishing in Congress for more than nine months.

Nevertheless, people like Gail Powers believe the issue will be a decisive one in congressional races.

Powers, whose son was in a classroom at the North Valley JCC during the shooting, got involved because she didn’t want another parent to feel like she did. She said she is “amazed and astonished” at the unity of the different Jewish movements on this issue.

Powers started out as the “e-mail person” for the march. She later got more involved, becoming the California coordinator and the western region coordinator for the march, and helped bring more than a thousand people to Washington.

When Elaine Bayer of the Chicago suburb of Homewood, Ill., heard about the march, she called up organizer Dees-Thomases and told her to get in touch with Hadassah, the Women’s Zionist Organization of America. Bayer, an executive board member of the Chicago Hadassah chapter, then decided she would organize her own family.

“I said, `I’m going to bring everybody to Washington,'” Bayer said, as she stood with seven other members of her family.

The North Valley JCC shooting also brought the issue home for Bayer. “This is not just something that happens to other people,” she learned.

More than 500 Hadassah members, some wearing personalized white-and- pink “Million Mom March” T-shirts, came to the march, and many others had planned to participate in some of the 73 local marches across the country.

Small groups representing synagogues or Jewish organizations from around the country came with banners and signs, dotting the mall grounds.

Gun control is a compelling issue in the Jewish community, said Rabbi Eric Yoffie, president of the Reform movement’s Union of American Hebrew Congregations, but until now while there was sympathy, that hadn’t translated into anything concrete.

“Now I hope it will make its way into the Jewish consciousness and the Jewish legislative agenda,” Yoffie told JTA.

Yoffie also encouraged coalition-building on gun control. “We’re too small to make the change ourselves,” he said.

At the interfaith service just before the rally and march officially began, Rabbi Marc Israel of the Reform movement’s Religious Action Center urged more action from the Jewish community, saying it is not enough to avoid violence but people must be “rodfei shalom,” pursuers of peace.

“True peace can only be found when our families and our communities are complete, when gun violence no longer shatters our lives and the lives of our loved ones,” he said.

Protesters around the National Mall carried signs that said, “Love Kids Not Guns,” “It’s Easier to Child-Proof a Gun Than to Bullet-Proof a Child,” and, pointedly, “Attention Congress: How Many Americans Must Die Before You Enact Sensible Gun Laws?”

Speaking at the march, Yoffie did not shy away from forceful points, either.

“We are ready for a knockdown, drag-out, no-holds-barred battle against the NRA, which is the real criminals’ lobby in this country, and which is drenched in the blood of murdered children,” he said.

Rabbi Avi Magie of Temple Emanu-El of Honolulu, who had vowed to attend the march “no matter what,” said his community is upset over a lack of stricter gun safety laws.

Even though Hawaii has some of the country’s most stringent laws, many in the community are angry that the state legislature will not pass a law to require a license to buy ammunition.

Magie believes gun control is clearly a Jewish issue because it involves the safety of families.

The Jewish community is required to do what it can to bring peace into people’s lives, Magie said. “It’s really quite simple.”