Iran’s Growing Nuclear Threat is Subject of Debate by Knesset 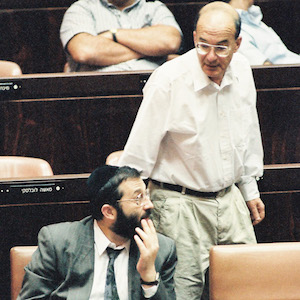 Beilin was responding to questions about Iran’s nuclear and military buildup, which has been the subject of recent accounts in the news media here.

Speaking on Tuesday, Beilin said that although Israel’s deterrent military capability is important, it is not enough to guarantee safety from Iran.

“This is dangerous because Iran is a country which regards terrorism as a legitimate tool, a country which is highly extremist and irrational, which has an interest to penetrate the Moslem republics of the former USSR,” said Beilin.

There was no difference of opinion in the Knesset as to the Iranian government’s nature, with Knesset members calling Iran a “crazy country” and warning that no one could tell when and who would press the red button in Teheran.

Beilin said Israel is trying to exert pressure on the West not to grant Iran any military aid. Israel also tried to convince China to refrain from aiding Iran, but the Chinese responded that their aid was earmarked for nuclear research geared toward peaceful purposes.

“I believe that our deterrence, the peace efforts and our diplomatic efforts can get us closer to an effective campaign against this phenomenon,” the deputy foreign minister said.

Knesset member Rafael Eitan of the right-wing Tsomet party, a former Israel Defense Force chief of staff, said that Israel alone should do its utmost to prevent the Iranians from achieving their goal, which he stated as erecting a world Islamic state, “without Israel and without Jews.”

Likud Knesset member Benjamin Netanyahu warned that Israeli deterrence is not an adequate response to the danger of the “Islamic Bomb.”

He urged the government to convince the United States and other industrialized countries to stop the flow of technological equipment and know-how to Iran.