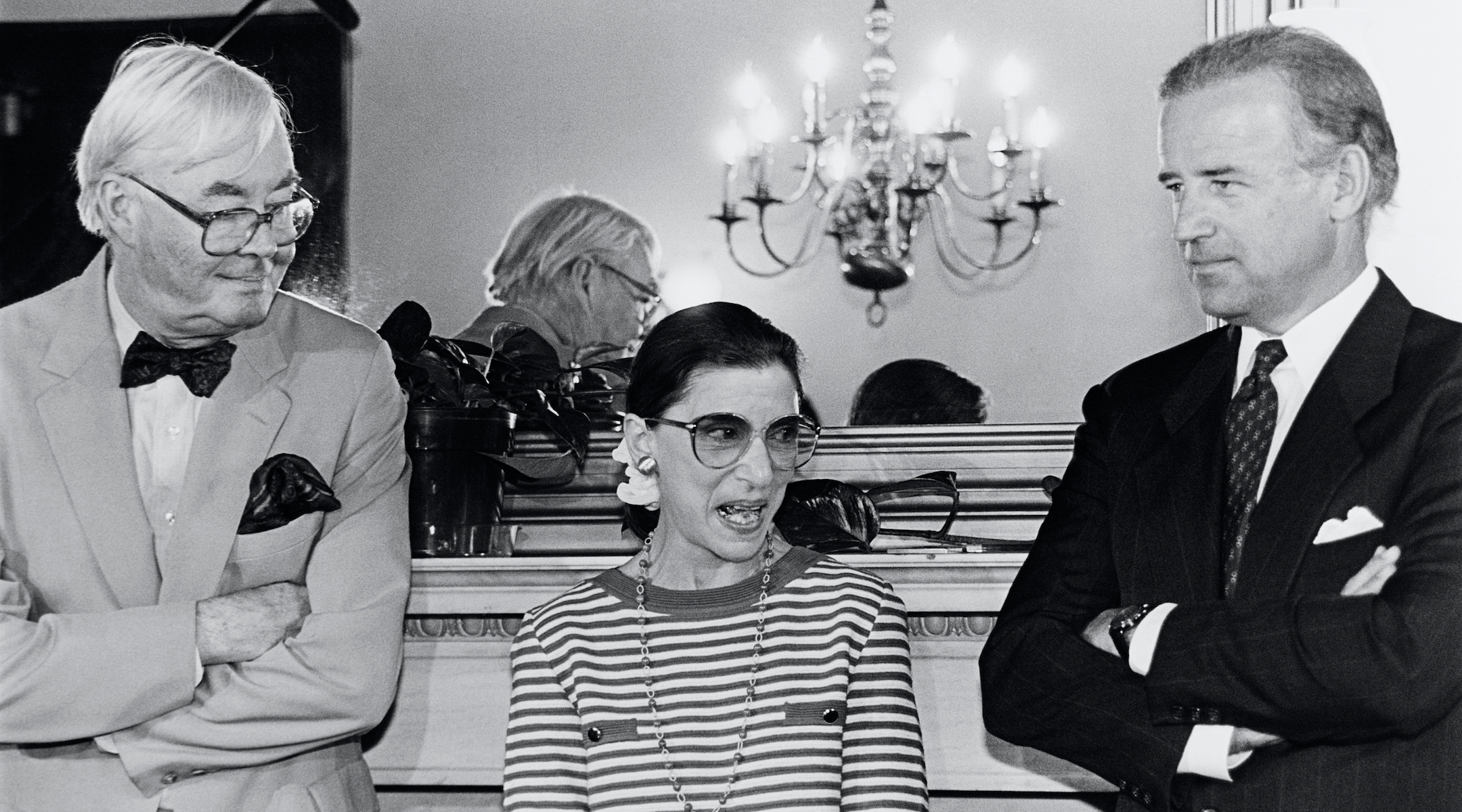 Jewish groups have welcomed President Clinton’s surprise nomination to the Supreme Court of federal appeals court Judge Ruth Bader Ginsburg, who would be the first Jewish woman ever to serve on the nation’s top court.

Ginsburg, who was appointed to the U.S. Court of Appeals for the District of Columbia Circuit by former President Jimmy Carter in 1980, would be the first Jew to serve on the Supreme Court since Justice Abe Fortas resigned in 1969.

Because Ginsburg’s name was less prominent in the media speculation leading up to Clinton’s announcement Monday, Jewish groups said for the most part that they had only begun to study her judicial record and could not comment on the specifics of her past decisions.

Ginsburg, who would replace retiring Justice Byron White on the court, is regarded as a moderate.

In announcing her nomination, Clinton said Monday that she had “genuinely distinguished herself as one of our nation’s best judges, progressive in outlook, wise in judgment, balanced and fair in her opinions.”

He also said she would serve as a “force for consensus-building on the Supreme Court,” as she has on the appeals court.

Ginsburg told the crowd assembled in the White House Rose Garden for Monday’s announcement that her selection “contributes to the end of the days when women, at least half the talent pool in our society, appear in high places only as one-at-a-time performers.”

If confirmed by the Senate Judiciary Committee, Ginsburg would join the first woman to serve on the court, Justice Sandra Day O’Connor, appointed by Ronald Reagan in 1981.

“Many admirers of her work say that she is to the women’s movement what former Supreme Court Justice Thurgood Marshall was to the movement for the rights of African Americans,” Clinton said.

Ginsburg has argued women’s rights cases before the court, Clinton said, and won five out of six of them.

Overall, while pleased that the so-called “Jewish seat” on the court may be occupied once again — for the first time in nearly a quarter of a century — Jewish groups said they had not been actively lobbying for a Jewish justice.

Most officials from Jewish groups said recently that they would rather have a nominee with whom they were in philosophical agreement than someone who happened to be Jewish.

But the sense overall this week was one of pride that a Jewish woman with impressive credentials had been nominated.

Jewish leaders praised Ginsburg’s previous work in academia and as a pioneer in women’s rights issues.

“Judge Ginsburg’s background as a law professor and work as founder of the Women’s Rights Project of the American Civil Liberties Union suggests that she is well-prepared for service on the Supreme Court,” American Jewish Congress President Robert LIfton said in a statement Monday.

Lifton also noted that Ginsburg had been a member of AJCongress and had actively participated in the group’s Commission on Law and Social Action in the late 1970s and early 1980s before being named to the bench.

Steve Gutow, the group’s executive director, said in a statement Monday that Clinton “deserves a lot of credit for selecting an appointee whose reputation as an outstanding jurist — not an ideologue — has earned her this nomination.”

While Ginsburg’s views on the 1973 landmark abortion ruling in Roe vs. Wade have been viewed by some as controversial, some in the Jewish community said she is within the spectrum of pro-choice voices on the issue.

“Some of the criticism of her has been unfair,” said Rabbi David Saperstein, director of the Religious Action Center of Reform Judaism.

‘EXCELLENT’ ON ISSUES OF CONCERN

In remarks recently, Ginsburg had criticized the sweeping scope of the Roe vs. Wade decision, arguing that a narrower ruling would have been less controversial and would have allowed states to liberalize their abortion rules more effectively.

Saperstein said Ginsburg would be “excellent” on such issues as civil liberties. First Amendment rights, the right to privacy and church-state separation, issues that are important to much of the Jewish community.

As the president observed while introducing Ginsburg, she is viewed as a conciliator between more conservative and liberal judges.

“She is very well-respected by her fellow jurists, both the liberal and conservative,” said Samuel Rabinove, legal director for the American Jewish Committee.

The tradition of a “Jewish seat” on the court started in 1916 with the appointment of Louis Brandeis and ended in 1969 with Fortas’ resignation.

Other Jewish justices to serve on the court during that period were Benjamin Cardozo, Felix Frankfurter and Arthur Goldberg.

Clinton’s nomination of Ginsburg came as something of a surprise, because speculation had been centering around Judge Stephen Breyer of Boston and Interior Secretary Bruce Babbitt.

But Breyer, who is also Jewish, ran into trouble when it was discovered he had a problem with Social Security taxes for domestic help similar to the problem that derailed Kimba Wood’s potential nomination for attorney general earlier this year. And Babbitt was considered difficult to replace at Interior.

Ginsburg, 60, has also served as a law professor at Columbia and Rutgers universities.