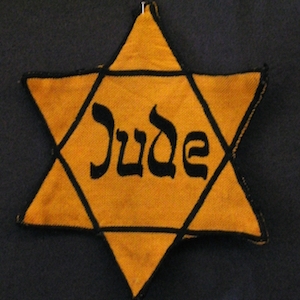 German Jewry will meet the Jewish New Year wearing large yellow Mogen Davids with which the word “Jude” is inscribed in black letters. Today was the first day when they appeared in the streets wearing the yellow badge which is decreed for every Jew in the Reich above the age of six.

The Svenska Dagbladet, a Swedish daily newspaper, reports today from Berlin that Jews in Germany were ordered not to appear in the street, if they are unable to procure a yellow Mogen David. It was reported last week that manufacturing of yellow Stars of David is meeting with great difficulties due to the lack of textiles.

Jewish war veterans in Germany were ordered to stop wearing their war decorations publicly, the Dagebladet report from Berlin states. The order forbids the veterans to wear their decorations and the yellow Mogen David together.

The city of Hanover, which until last week had a population of 1,600 Jews, today became “judenrein.” All the Jews left Hanover, and it Cantonese established whether they were expelled or deported for forced labor. Earlier this month the Jews in Hanover were evicted from their homes by the local Nazi authorities and permitted to take shelter only in the premises of the Jewish cemetery.