Libel Suit Against U.S. Historian Puts the Holocaust Itself on Trial 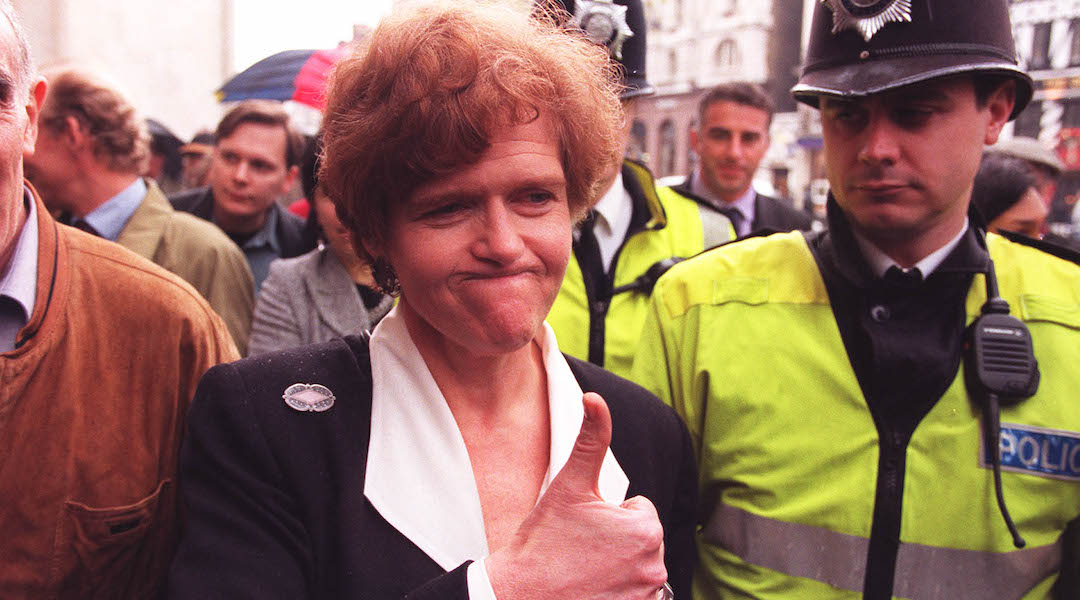 Deborah Lipstadt outside a courthouse during her trial against Holocaust denier David Irving in London, April 11, 2000. (Peter Jordan/PA Images via Getty Images)
See Original Daily Bulletin From This Date
Advertisement

The Holocaust is scheduled to go on trial in a courtroom here next week.

A leading Holocaust denier, David Irving, is suing a U.S. historian, Deborah Lipstadt, and her publisher for libel.

The case is expected to produce the most detailed judicial inspection of the Holocaust since the trial of Nazi official Adolf Eichmann in Jerusalem in 1961.

The alleged libel appears in Lipstadt’s work, “Denying the Holocaust: The Growing Assault on Truth and Memory,” published by Penguin Books in 1994.

The trial, which is scheduled to last three months, is set to begin Jan. 11.

Irving, a Brit who has acquired an international following, claims that Lipstadt attacked him personally and professionally, depicting him as an “Adolf Hitler partisan who wears blinkers and skews documents and misrepresents data in order to reach historically untenable conclusions, specifically those that exonerate Hitler.”

He also alleges that Lipstadt and her publisher damaged his reputation when they claimed he has “misled academic historians” into “quoting historically invalid points contained in his writings and who applauds the internment of Jews in Nazi concentration camps.”

Irving’s thesis centers on his assertion that Hitler did not order the Holocaust, did not know of it and was not therefore responsible for it. Irving has also denied that Auschwitz was an extermination camp and claimed that the number of Jews who were killed had been grossly exaggerated.

Lipstadt, who holds the Dorot Chair in Modern Jewish and Holocaust Studies at Emory University in Atlanta, says her charges against Irving are “true in substance and in fact,” according to depositions filed in the case.

Lipstadt will argue at the trial that the 61-year-old Irving is driven by “his obsession with Hitler” and that he “distorts, manipulates and falsifies history in order to put Hitler in a more favorable light, thereby demonstrating a lack of detachment, rationality and judgment necessary for a historian.”

Lipstadt, who is being represented by Anthony Julius, a prominent London attorney who was the former lawyer for Princess Diana, has declined to be interviewed before the trial on the advice of her lawyer.

But according to the court papers, she will also contend that Irving has “on numerous occasions denied the Holocaust, the deliberate, planned extermination of Europe’s Jewish population by the Nazis, and denied that gas chambers were used by the Nazis as a means of carrying out that extermination.”

She will charge that Irving “holds extremist views and has allied himself with others who hold such views,” including Robert Faurisson, who was convicted by a French court of denying the Holocaust, and Ernst Zundel, the Canadian author of “The Hitler We Loved,” which concludes that Hitler’s spirit “soars beyond the shores of the white man’s home in Europe.”

Irving, who lives in London, himself has disputed the number of Jews who died in concentration camps, suggesting that most deaths were the result of natural causes, and that crematoria and other buildings at concentration camp sites were constructed after World War II.

On one occasion, he declared that “about 100,000 people died in Auschwitz in three years” and that “if we must assume generously that a quarter of them were murdered, then we must remember that the British killed 50,000 Germans in one night when they raided Hamburg.”

On another occasion, he asserted bluntly, “Auschwitz was not an extermination camp and the Holocaust was a propaganda hoax by the British.”

Irving’s theories, propounded to an audience of about 800 people in a German restaurant in 1990, led to his conviction in the Munich District Court on charges of defaming and denigrating the memory of the dead.

The German court held that “anyone denying the gassing and murder of Jews in the Third Reich defames every Jew and slanders the memory of all Jews gassed in Auschwitz.”

More recently, in response to a challenge from a London school teacher last July about Holocaust survivor testimony, Irving said that of the testimony he has read that “many of the more prominent ones appear to be concocted by congenital liars.”

Irving is now persona non grata in Germany, Austria, Italy, Canada, Australia, New Zealand and South Africa, where he had been in frequent demand as a lecturer.

According to Efraim Zuroff, the director of the Israel office of the Simon Wiesenthal Center, the upcoming London case marks the “second stage of Holocaust trials.”

“If, in the past, we have been dealing with the perpetrators of the Holocaust,” he told JTA, “we are now dealing with challenges to the historical record.”