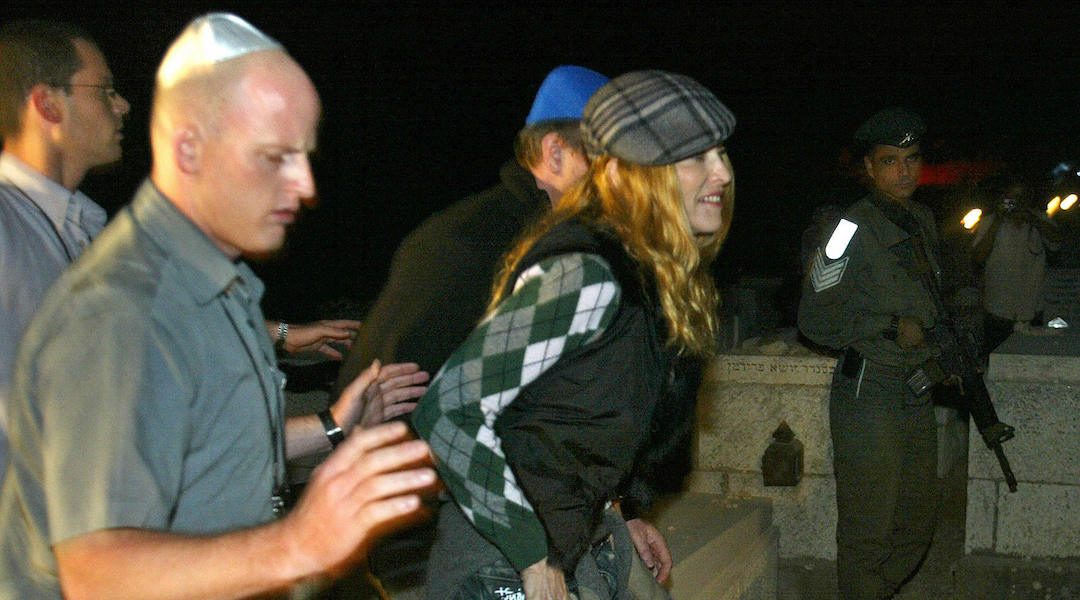 Pop diva Madonna was among the praying, swaying and singing masses of Kabbalah enthusiasts who made the pilgrimage to Israel for the High Holidays, seeking spiritual transformation through a brand of Jewish mysticism. The “Material Girl” was celebrated by an Israeli public hungry for a touch of celebrity after four years of violence with the Palestinians that has scared away visitors of all stripes — famous and anonymous alike.

“I think it’s the best P.R. we can have,” Tourism Minister Gideon Ezra said of her visit, as part of a program sponsored by the Los Angeles-based Kabbalah Center.

The world’s best-known student of Kabbalah, Madonna — along with her husband, film director Guy Ritchie — was among some 2,000 devotees who descended upon Israel from 22 countries, hoping to absorb the strength of what they say are extra-powerful energies emanating from the Holy Land during the period between Rosh Hashanah and Yom Kippur. “We want to create peace in the world. We want to put an end to chaos and suffering. But most of all we want to put an end to hatred for no reason,” Madonna told an audience at a benefit Sunday for a children’s foundation run by the Kabbalah Center.

The center, which prides itself on bringing the tenets of Jewish mysticism to people of all backgrounds and religions, has been criticized by traditional Jews who claim it has watered down Kabbalah into a distorted, New Age form of its true teachings.

“The Kabbalah Center has nothing behind it,” said Jonathan Rosenblum, director of Am Echad, an Orthodox media resource organization in Jerusalem. “This is proof that at least some of the people can be fooled some of the time.”

Last Friday, though, hundreds of Kabbalah enthusiasts clamored on the rocks by the Tel Aviv beach front for a tashlich service.

Closing their eyes and clutching white prayer books, they gathered in small groups and recited prayers. “This is fo! r everyone in the whole world,” said one group in unison as they tosse d breadcrumbs representing sins into the sea.

“This is about letting go,” said Kenya Berryman-Jones, a 56-year-old homemaker from Greensboro, N.C., who has been studying Kabbalah for about six months.

She said she has incorporated teachings of Kabbalah into her practice of Christianity. “I am learning about my true self, how to become a better person, how to share and give and not look for anything in return.”

This was Berryman-Jones’ first trip to Israel, and she said came in order to “get closer to my roots.”

“This is where it all started,” she said. “Israel is the center of the world.”

“People wanted to come to Israel to make a difference,” said Miri Citron, 46, from Fairfield, Conn. She said that the force of the gathering’s energy could have healing powers for the world.

Citron, who was born in Israel and grew up in the United States, said she became interested in Kabbalah after learning about other spiritual systems such as those practiced by Native! Americans and Buddhists.

“For me, this is coming back to my roots, my Jewish roots as well,” said Citron, a health care administrator with red plastic frame glasses as her blond hair blew in the sea breeze.

She said that all the attention focused on celebrities like Madonna tends to overshadow the fact that, like many others, they are seeking personal transformation.

The most famous personality participating in the tashlich ceremony was Marla Maples, a model and actress best known for her famous ex-husband, real estate magnate Donald Trump.

For Maples, who has been studying Kabbalah for seven years, coming to Israel was an important step in her spiritual journey.

“Israel is the heartbeat of the world,” she says, holding a bottle of Kabbalah mineral water, marketed by the Kabbalah Center for its spiritual properties. “Because there is so much unrest in the Middle East, we felt that it would be useful for us to come here and mediate for peace.”

She sa! id incorporating Kabbalah teachings in her life has made a real change .

“It’s helped me live without so much chaos, it’s helped me deal with anger,” she said. She added that, if celebrities wish to address their own spiritual lives, they are “as deserving as anyone else.”

The former beauty queen from Georgia said she did not sleep at all Tuesday night. Instead, she and friends drove to northern Israel and spent the night on a spiritual pilgrimage that began with a visit to the graves of rabbinical sages in Safed and ended watching the sunrise in the hills.

Kabbalah followers believe that visiting graves of holy men can have transformative powers.

According to Rabbi Shaul Youdkevitch, the director of the Kabbalah Center in Israel, non-Jews have taken part in Jewish practices throughout the religion’s history.

Indeed, he said, the main principals of Kabbalah — human dignity and loving one’s neighbor as oneself — are universal and speak especially to those who feel alienated from their surroundings.

Boaz Huss, who lecture! s at Ben-Gurion University’s Jewish thought department, is an expert on Kabbalah.

He says the Kabbalah Center represents “an innovative postmodern interpretation of Kabbalah” and that the interest in its teachings reflects a broader trend of people searching alternative cultures for spiritual answers.

According to Huss, Madonna is playing a key role.

“The link is Madonna,” he said. She is “one of the most influential and significant artists of the post-modern era. She shapes and is still shaping a lot of our culture and this integration” with Kabbalah “is very interesting.”

That Kabbalah centers also draw many Israelis should not come as a surprise, he said.

“It is natural in Israel” that Israelis “will go back to something somehow connected to Jewish tradition,” Huss said.

On the Tel Aviv boardwalk during the tashlich ceremony, boisterous dancing, singing and clapping broke out among the Kabbalah followers. Packed in tight, concentric circles, the par! ticipants, many of them Israeli, sang and danced around a tallit held high in the air.

The singing stopped and the groups suddenly started cheering in unison, fluttering their hands in the air in what one of the members says is an attempt to direct positive energy.

“It’s a wonderful opportunity to give light for the rest of the entire year,” said Avraham Nissin, a 26-year-old university student who has been involved in the Kabbalah Center in Tel Aviv for eight years.

“Kabbalah is not just for Jews; it’s light and knowledge,” he says.

Moshe Kuperberg, a 55-year-old Tel Aviv businessman was dressed in a white suit.

“Today there is a lot of energy,” he says. “Three thousand people singing and shouting and asking for peace for all of Israel and the entire world.” he says.

Observing the scene of fervor and prayer was Mazal Naor, a retired accountant from Jerusalem who came to Tel Aviv for Rosh Hashanah.

“I think it’s great,” Naor said. “It unites everyone for peace. I don’t know who is Jewish, who is Christian or who is Mus! lim here, and the unity is nice to see.”