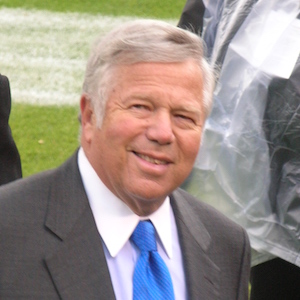 Large numbers of Israelis watched the Super Bowl this week, cheering on the victorious New England Patriots and their philanthropic-minded owner, Robert Kraft.

A few weeks later, they’ll be cheering on a very different football team backed by Kraft — a team of young women, many of them Orthodox Jews.

Kraft does business in Israel, operating the country’s largest packaging plant, Carmel Container Systems in Caesarea. And along with his wife Myra, Kraft has helped develop a sister-city relationship between his hometown of Boston and Haifa, assisting in the absorption of Haifa’s Ethiopian community.

But Kraft has done something even more unusual, blending his love of Israel with his passion for football by sinking $250,000 into the Kraft Family Stadium. Located at the north end of Sachar Park near the entrance to Jerusalem, the stadium has served for four years as a center for sports in the Israeli capital, hosting youth soccer and softball groups, little league baseball and a hugely successful men’s flag football league.

Now the stadium is also home to something new: Israel’s only women’s football team.

“When we first met with the Kraft family, Myra was quite interested and insistent that we do something about women’s sports,” said Steve Leibowitz, stadium director and president of American Football in Israel, which runs the men’s league. “At the time it hadn’t occurred to us because we were involved with men’s football and we didn’t think in terms of women’s football.”

While refereeing a men’s game last October, Leibowitz noticed a group of high school girls watching. He walked over and asked if they wanted to form a women’s team; they jumped at the chance, and two weeks later provided a list of interested players.

Well, not exactly “players.” While the men in the league — mostly Americans spending a post-high school year at an Israeli yeshiva — have been playing the game since childhood, some of the women had never held a football before.

“They had never played — most of them had no concept of the game,” said Yona Mishaan, a perennial MVP in the men’s league who volunteered to coach the women. “I had no idea if this was going to work.”

Mishaan’s aim was to take the 14 women, ages 15 to 23, and make them respectable enough to compete in the international flag football championships next month in the Dominican Republic, where the Israeli national men’s team also will play.

He found his team leader in 17-year-old Shana Sprung, the quarterback, whose experience consisted of playing tackle football at home with two older brothers.

“When I look at this team — I was here from day one — how it was then and what it is now, it’s amazing what a difference,” said Sprung, a native of Miami who made aliyah with her family 15 years ago. “We’re catching the ball. A lot of the girls, when they came out, they didn’t even know, like, how the game worked. In football, if you don’t work as a team, if everybody doesn’t do the exact pattern, then the play is not going to work. In the beginning our team had a hard time understanding that.”

In addition, the team had to deal with other concerns, because most of the players are observant. While Leibowitz called the team “a real breakthrough” for Orthodox women, he and Mishaan had to calm the fears of the players’ parents, calling a meeting to discuss issues like keeping kosher, observing the Sabbath, female chaperones — and uniforms. Some will wear pants, while others wear skirts, but questions of modesty had to be taken seriously.

“Our girls have been given the responsibility themselves of designing their own skirts,” said Leibowitz. “They are sewing them themselves. They bought the material. Yona and I didn’t want to decide how long their skirts have to be; the girls should decide what’s modest and what’s not.”

Ironically, those uniforms will include the patch of the team’s main sponsor, JDate, a Web site devoted to dating — an activity in which Mishaan and Leibowitz promised the parents that the players would not be indulging.

For their part, the parents seem as excited as the team is, at the thought of their daughters playing and representing Israel at an international competition.

“This whole idea of my daughter being an athlete is a dream come true, because my daughter is very gifted athletically, and there was no venue for her to apply herself,” said Rebecca Sprung, Shana’s mother. “I always felt that she was missing something because she is quite athletic. She rollerblades, she rides horses, she rides bikes, but she never had a chance to excel in a competitive sport,” adding, “I have never seen her happier in my life. She’s totally, totally blossomed with this challenge.”

The youngest player is 15-year-old Ahuva Odenheimer, the team’s center. For her, it’s all for fun.

“It’s, like, a place where I just concentrate on one thing during the week,” Odenheimer said. “I have four hours a week where I don’t do anything but football and hang out with my new friends. It’s kind of relaxing; I can clear my head from everything else. Maybe it’s a bit of an escape from another world — school, problems at home, problems with friends, whatever it is.”

But competition is the name of the game. To that end, Mishaan convinced the Tel Aviv women’s rugby team to drive up to Jerusalem last week for a scrimmage. The results were encouraging, considering the rugby team had never played football before.

So while Kraft can feel proud that his Patriots have reached the Super Bowl twice in three years, he can also take pride in having facilitated perhaps an even greater accomplishment: an Israeli women’s football team competing internationally.

“We’re definitely not coming back” from the Dominican Republic “with the cup,” said quarterback Sprung. “I just hope we win some games. I know there are some teams we have no reason to lose against, and if we can beat teams that are better than us, then why not? The more the merrier. I feel blessed to have this opportunity, to bring pride to my country during its bad times.”