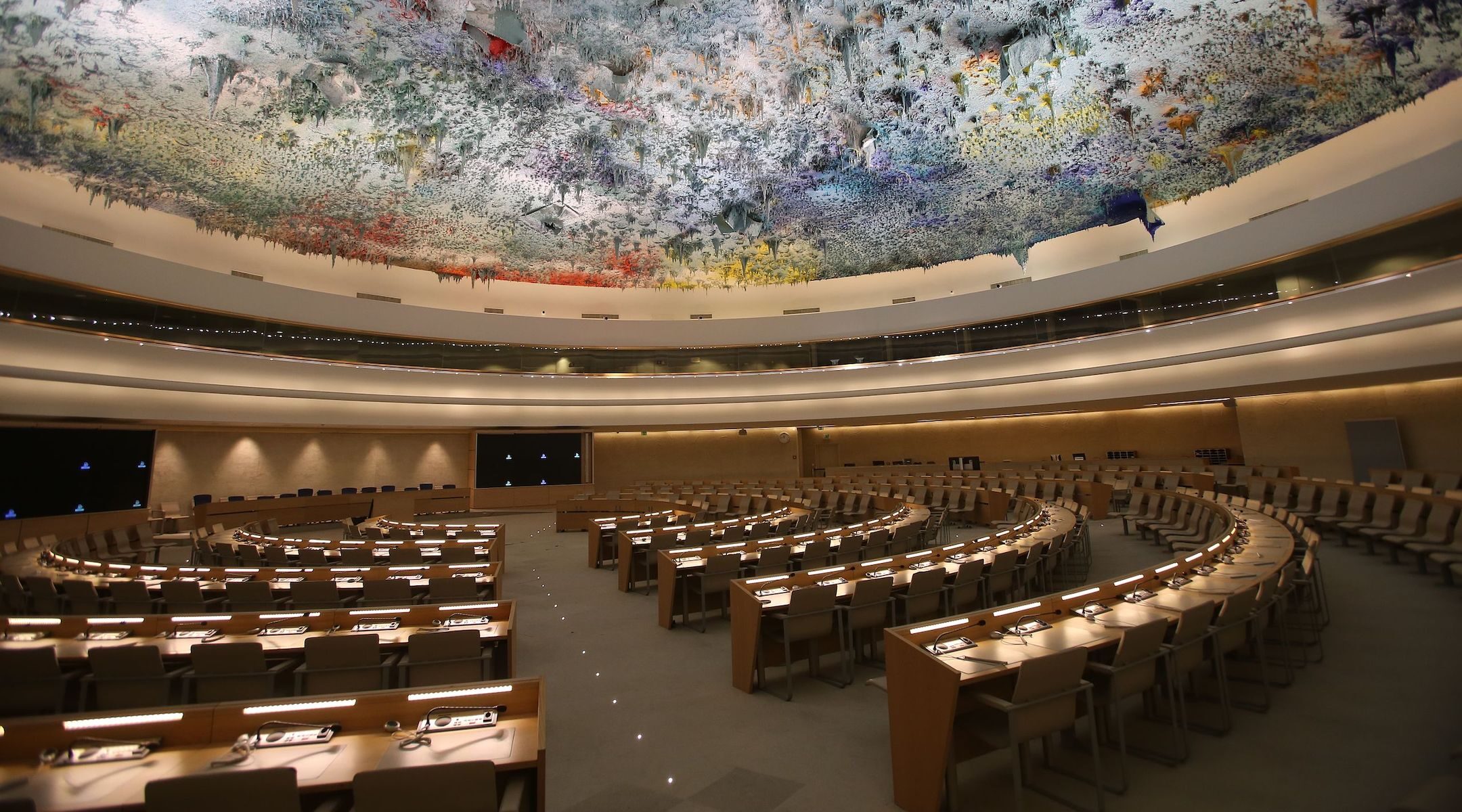 The United Nations’ Human Rights Commission was seen by many as unabashedly anti-Israel, dominated by pro-Palestinian and Islamic agendas.

Now supporters of Israel are wondering if its successor, the Human Rights Council, will be any different.

The new council, created March 15 as part of an ongoing U.N. reform campaign, convened for the first time last week, drawing 47 states to Geneva. The initial session will last through June 30.

The schedule so far has been dominated by speeches and visits by foreign dignitaries, but objections to Israel already have crept onto the agenda.

Syria in particular asked for a special agenda item on Israel, Kessler told JTA from Geneva.

Such rhetoric is expected to increase during this week’s “pressing issues” session, an open forum which is the first opportunity delegates have to bring issues to the fore.

Though some countries have mentioned other conflict zones, such as Sudan and North Korea, Jewish groups worry that Israel’s detractors will monopolize the floor, as they frequently did at the commission.

It’s certainly legitimate for countries to raise issues of concern to them, but “when it comes to drawing biased resolutions that are disproportionately focused on one situation,” Kessler said, “that’s what discredits the whole process.”

Israel Singer, chairman of the World Jewish Congress’ Policy Council, stressed the need to give the rights council some time “before the baby is called stillborn at its birth.”

But some say the organization already is falling short.

Hillel Neuer, executive director of U.N. Watch in Geneva, an American Jewish Committee affiliate, explained that 26 out of the council’s 47 seats are believed to be susceptible to pressure from Muslim countries.

Indeed, Muslim states dominate two regional groupings, holding 16 of the 26 seats allotted to Africa and Asia. With much of the council’s decision-making done by deliberation in such groupings, Islamic representatives will exert considerable influence on their peers, Neuer explained.

Like its predecessor, the council has doled out seats to nations with dubious human rights records, such as China, Cuba, Pakistan, Russia, Saudi Arabia and Azerbaijan.

Though Neuer credited the council for blocking certain human-rights abusers, such as Sudan and Libya – both of which sat on the old commission – he expressed concern over the fact that nearly half of the council’s new members, by his calculation, don’t meet democratic standards.

“We have a membership where it’s still the foxes guarding the chicken coop,” Neuer said.

“It’s true there are less foxes than there were on the commission,” he added, “but if I were a chicken, that doesn’t make me very happy.”

The council does represent some progress, however. At a press conference in New York earlier this month, U.N. Secretary General Kofi Annan said, “I hope we are not going to see a situation where the Human Rights Council focuses on Israel, but not on the others.”

His message was amplified by several countries in the opening days of the council session.

With the United States declining to run for a seat, Kessler expressed the hope that Western countries on the council, led by European Union members, would “draw a red line around where they stand when it comes to Israel.”

The U.S. voted against the resolution creating the council because of a lack of “sufficient confidence in this text to be able to say that the HRC would be better than its predecessor,” America’s U.N. ambassador, John Bolton, said.

Watchdog groups hope the body’s new “universal-review” mechanism, by which all countries are to be judged by the same yardstick, will be realized in practice.

Council members will be the first countries subject to the council’s universal periodic review, which will assess how well states are fulfilling their human- rights commitments.

“It’s a nice idea, but will it be a toothless mechanism or will it be real scrutiny?” Neuer asked of universal review. “There are some new mechanisms that have potential but will require enormous unity and determination.”

Kessler said spillover from the recent decision, also in Geneva, to admit Israel to the International Red Cross and Red Crescent movement could affect the council’s proceedings.

Shai Franklin, director of international organizations for the World Jewish Congress, said Jewish groups are trying to harness that momentum.

“Maybe we can peel away a couple of enemies and create a couple of new friends,” he said. “We have a real opportunity here.”

He added that the results of the effort would become clearer in September, when the rights council convenes for its second meeting and is slated to take up a more substantive agenda.