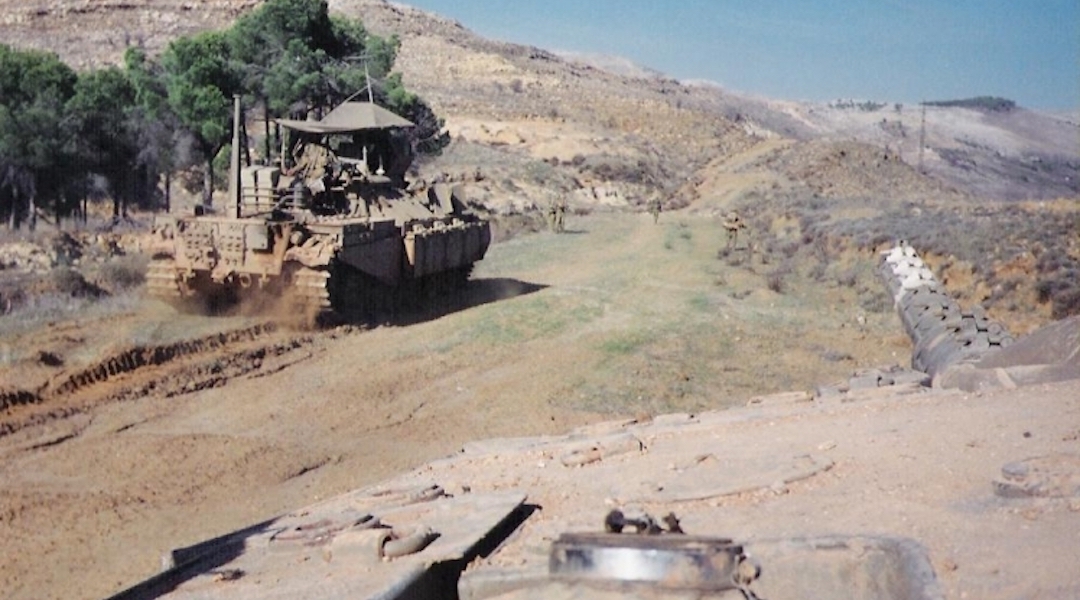 Israel’s annual Memorial Day for its fallen soldiers is always a time of somber introspection.

This year, however, the nation’s mood seemed particularly subdued because of the latest turn of events in southern Lebanon.

On everyone’s mind was the fact that Staff Sgt. Shaked Ozeri had become the latest military fatality — number 19,109 since the 1948 War of Independence, according to statistics released when Memorial Day was held Tuesday.

Ozeri died last weekend in Kiryat Shmona, burned to death in his jeep when Hezbollah gunmen launched a Katyusha missile attack on the northern town.

“They won’t let us leave quietly,” a senior officer recently said during a Knesset briefing.

Earlier in Barak’s premiership, now approaching its first anniversary, the expectations had been very different.

Barak had pledged during his election campaign last year that the Israel Defense Force would leave southern Lebanon “with or without an agreement with Syria.”

The idea of withdrawal after 18 years of bloodshed was enormously popular.

When, late last year, the Syrians announced they were returning to the negotiating table with Israel after a three-year suspension, Barak and his advisers loudly congratulated themselves on the prime minister’s tactical achievement.

They felt that Barak’s determination to withdraw, unilaterally if need be, had persuaded Syrian President Hafez Assad to resume the talks.

When the talks collapsed again, following an abortive summit meeting between Assad and President Clinton two months ago in Geneva, Barak was left with his withdrawal pledge.

The Israeli public still supports the withdrawal, but much of the original enthusiasm has dissipated.

Originally it had been envisaged as a comfortable, peaceful pullback, ushering in an era of peace with Israel’s most implacable neighbor.

But now it is now unfolding as an inelegant retreat by the army from its positions in the security zone — accompanied by sniping and sneering from Hezbollah.

Citing their years of guerrilla actions, the Shi’ite gunmen and their Iranian backers are taking all the credit for Israel’s decision to pull back.

In order to give that boast added weight, they are seeking to ensure that the final weeks of Israel’s presence in Lebanon be as unhappy as possible.

Israel’s stance, until last weekend, was to make some strong threats.

“I don’t advise anyone — and I mean anyone — to try us once we’re back behind the international border,” warned Barak, saying the IDF would retaliate massively to any cross-border attack launched after the withdrawal.

But in fighting that erupted late last week, Hezbollah appeared to pay scant attention to those threats. On May 4, saying it was retaliating for Israeli escalations, Hezbollah launched Katyusha rocket attacks on northern Israel. Those salvoes killed Sgt. Ozeri and lightly wounded more than two dozen people.

In response, Hezbollah launched even more rockets at northern Israel last Friday, apparently quite oblivious of Deputy Defense Minister Ephraim Sneh’s threat to “hit even harder” if the rockets kept raining down.

But this time, Israel blinked. At a special Security Cabinet meeting last Friday, Barak proposed that Israel not bomb again, despite its threats.

He noted that the second round of Katyusha salvoes had resulted in no further Israeli fatalities. He referred to the intricate diplomacy now under way surrounding the eventual withdrawal and the possible stationing of beefed-up U.N. peacekeeping troops along the border zone now held by Israel.

Some northern residents, however, disagreed with the Cabinet’s decision.

After spending a tense weekend in bomb shelters, residents of Kiryat Shmona on Sunday burned tires and blocked the city’s main roads as they called for a harsher Israeli response to the Hezbollah rocket attacks.

The mounting trepidation in Israel over the impending unilateral withdrawal is aggravated by fears of what will happen to Israel’s ally in the region, the South Lebanon Army.

On Monday, its commander, Gen. Antoine Lahad, appealed dramatically to the Beirut government to pardon all of his men. He himself bore the responsibility for what had taken place over the years, Lahad said, though he did not offer to turn himself in.

Less than a day later, his plea was summarily rejected by the Lebanese prime minister, Salim Hoss, who demanded that Lahad stand trial for treason.

Israel, meanwhile, is facing strong pressure from the United States and France to disarm the SLA, at least of its heavy weapons, before the IDF withdraws.

Failure to do so, according to the French, would be tantamount to Israel’s not withdrawing at all.

But there is extreme discomfort in Israel at the thought of leaving its former ally stripped of its tanks and artillery.

On the other hand, there is not much enthusiasm for the idea of having Israel absorb large numbers of the SLA fighters and their families.

For their part, many of the SLA fighters are insisting that they will remain on their land whatever happens, fighting whoever fights them with whatever weapons they have at their disposal.

Their fatalistic bravery stands in stark contrast to Israel’s ambivalent attitude toward them.