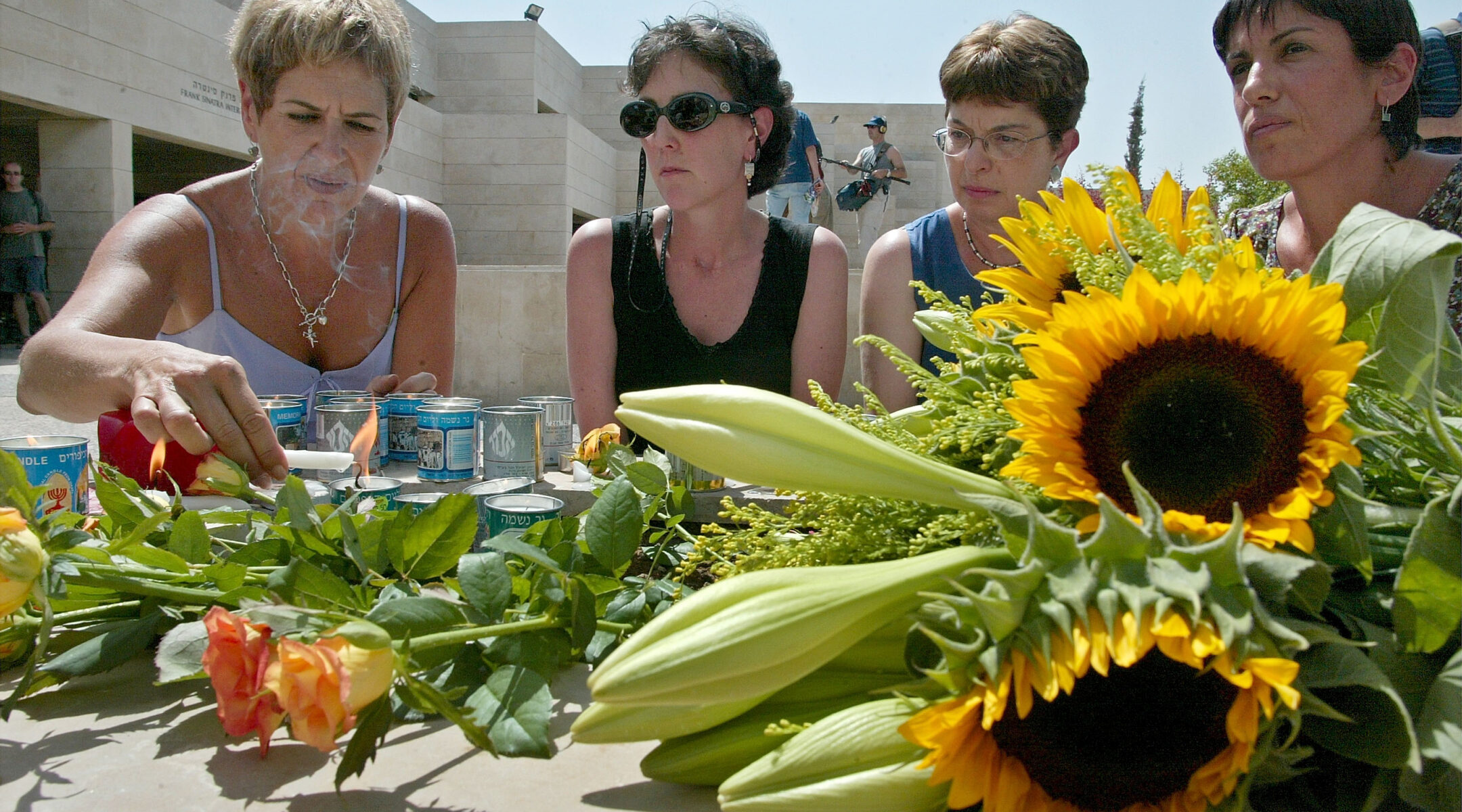 Long before the dreaded call came, Linda and Michael Bennett knew that their daughter Marla was dead.

Like many American parents whose children live or study in Israel, the San Diego couple had grown accustomed to the reassuring call that came after each terrorist attack.

“Every time a bomb would go off, Marla would call within 10 or 15 minutes because she didn’t want them to worry,” said Norm Greene, a close friend of the family.

On Wednesday, after a bombing in the cafeteria of the Hebrew University in Jerusalem, the call never came.

The Bennetts frantically tried to track down their daughter, a 24-year-old who had been doing joint graduate work at Pardes Institute for Jewish Studies and the Hebrew University.

“When the phone didn’t ring, we all knew,” Greene said. 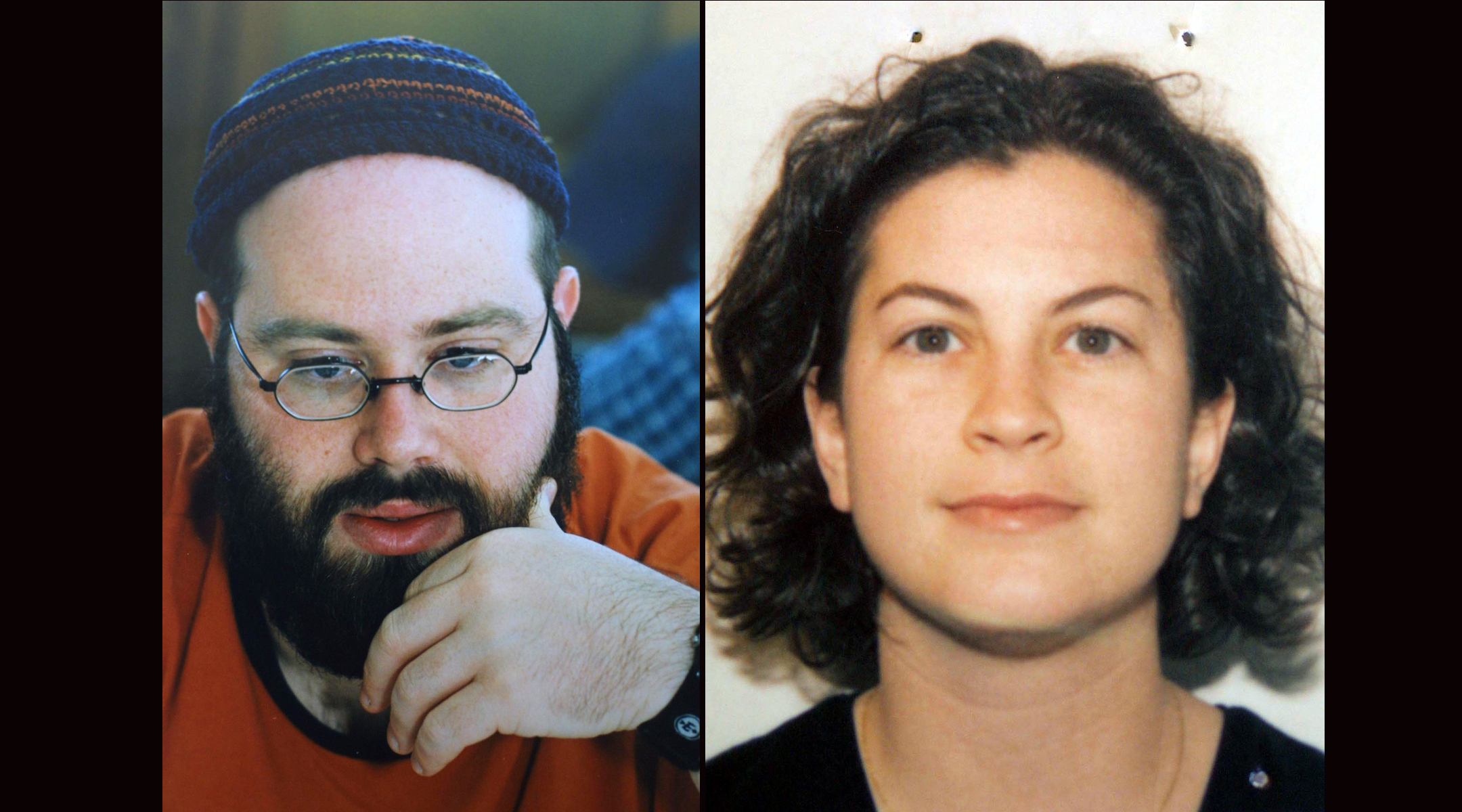 Benjamin Blutstein and Marla Bennett were among the students and others killed in the bombing of Hebrew University’s cafeteria on July 31, 2002. (Getty Images)

Still, the Bennetts and friends desperately hoped that maybe Marla “was injured, in a hospital somewhere,” Greene added. They spent an agonizing day frantically searching for information, even emailing dental records to Israeli authorities that could help identify Marla.

At 10 p.m., with the help of Israeli diplomat Benny Navon and FBI officials, who tracked information through the Israeli police, a call of a different kind came.

It was Navon, who called to unofficially confirm Marla’s death.

“It’s the worst nightmare for any parent,” Greene said. “Everybody loved Marla, except some S.O.B. with a cell- phone bomb detonator.”

But the family’s painful day wasn’t over. At 2 a.m. a State Department official called to ask the Bennetts what arrangements they wanted to make for Marla’s body, Greene said.

State Department officials could not immediately comment on the matter, except to offer their “condolences” for the families of the five Americans and two Israelis killed in the attack. At least 80 people were wounded.

When Wednesday began, the Bennetts had been preparing to welcome Marla home. She was planning to take a leave from Pardes to attend a friend’s wedding and a bar-mitzvah in the United States, and to spend the High Holidays with her family. Then she planned to return to Israel to complete a two-year program to become a Jewish day school teacher.

In an essay she wrote for the San Diego Jewish Press-Heritage and for the Pardes school, Bennett said she was aware of the dangers of living in Jerusalem.

But they were outweighed, she said, by the “magical” nature of living there and being able “to assist, however minimally, in Israel’s triumph.”

“She loved living a life of meaning,” said David Bernstein, dean of the Pardes Institute, which offers courses in Jewish textual study. “Students here are all aware of the dangers. There are some, like Marla, who make a decision to stay here, and do so out of a love for Israel and a love for Judaism.”

One Pardes faculty member, Meesh Hammer-Kossoy, said Bennett was an extemely spiritual woman who “was really in touch with the divine.”

Knowing Bennett, it was “like when you relate to someone and feel they’re tremendously in touch with the energies in the world, with your energies,” Hammer-Kossoy said. “It’s a kind of charisma. It’s impossible to imagine they’ve taken that away from us.”

Bennett was sharing a table in the popular Frank Sinatra Cafeteria with her friend and Pardes colleague, Benjamin Blutstein, 25, of Susquehanna Township, Pennsylvania.

Blutstein, who like Bennett had just extended a two-year stay in Jerusalem for two more years, had been due back in the United States on Thursday to visit his family.

His father, Dr. Richard Blutstein, called Benjamin’s cell phone early Wednesday hoping to call and discuss travel plans, and left a message. After learning of the attack and failing to hear from his son, Blutstein called friends in Israel to track Ben down.

By 4 p.m., the family received official notification of Blutstein’s death from the U.S. Embassy in Tel Aviv.

Those close to him described Blutstein as a young man dedicated to learning about Judaism and working as a disc jockey. In Israel, where religious and secular societies are largely separate, Blutstein’s ability to merge the two worlds was rare, and left an impact, some said.

Pardes officials described Benjamin as a kind of class clown who was also very serious about his studies. He often played bongo drums at Pardes parties, Bernstein recalled, yet “took living according to Jewish law very seriously.”

The elder Blutstein had visited his son in May. He recalled how an Israeli rap musician asked Benjamin, who played trance and techno music at Jerusalem clubs, to perform at a rave party in Tel Aviv demonstrating against the Israeli presence in the West Bank and Gaza Strip.

“His politics wasn’t along those lines, but he went,” his father said. “He warmed up for an Arab rap group, whom he criticized — not for their politics, but for their music. He was not primarily political. He felt Israel had a right to exist, and that the Arabs had not been acting nice.”

Like others, Blutstein was aware of the dangers he faced in Jerusalem.

In a letter he wrote to his family last Thanksgiving, he wrote that some “might think I’m kind of crazy for being in a dangerous part of the world. Perhaps they are right. But I feel that I’m doing something very important. I am growing and changing. I don’t know where this learning is taking me, but I think it’s where I should be going.”

“Janis was extremely committed to Hebrew University and what it stands for,” said her friend, Lisa Magnas, a descendant of university founder Judah Magnes and president of the university’s American alumni association.

Every one from the American Friends of Hebrew University office in New York “goes to Israel once a year, and this was her turn,” Magnas said. “She was really excited about going. She died for everything she believed in.”

Coulter, a convert to Judaism who grew up in West Roxbury, Mass., “always felt that Jerusalem was her second love,” said Peter Willner, executive vice president of AFHU.

Coulter’s first love was New York, Magnas said, and she seemed to attend every Hebrew University event in the city that she could.

When Coulter arrived in Jerusalem this week, she called an AFHU official to tell him “that she felt like she was home again,” Willner added.

Another U.S. citizen killed in the attack was David Gritz, 24, of Peru, Mass., a small town in the Berkshire Mountains.

Gritz was the son of a Croatian mother and American father who grew up in Paris but spent summers at the family’s Berkshire home.

He also held Israeli citizenship, and was about to begin a Hebrew course and a graduate course in Jewish thought at the Rothberg School.

He received his B.A. in philosophy from the University of Paris IV in July 2000, and had just completed his first year of studies for a master’s degree in philosophy.

Also killed was Dina Carter, 37, who was born in North Carolina and moved to Israel in 1990.

Carter worked as a librarian and archivist in the National Library on Mount Scopus, having studied anthropology at Duke University.

Two Jerusalem residents also died in the attack: David Diego Ladowski, 29, an immigrant from Argentina who was a cadet in the Israeli consular corps, and Levina Shapira, 53, who was from a prominent Jerusalem family.

Bernstein of the Pardes school said the loss of these young people would be felt for a long time.

“It is a tragedy for the thousands of students who would have had these people as teachers,” he said. “Now, they will never have that opportunity.”