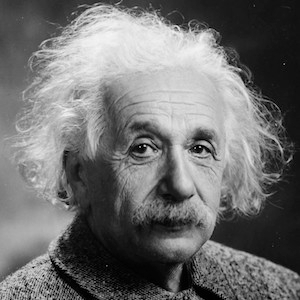 Professor Einstein acted as godfather and Mrs. Einstein as godmother, at the “Bris Milah” celebrated for the infant son of Jacob Landau and Mrs. Ida Landau. Jacob Landau is Managing Director of the Jewish Telegraphic Agency.

Professor Einstein, Mrs. Einstein, Jacob Landau and Simon Bergman, president of the American Tulip Cup Co., travelled down to the Boulevard Sanitarium in Astoria, L. I., where the child was born on March 10.

Professor Mordecai Kaplan, president of the Rabbinical Assembly and Dean of the Teachers’ Institute of the Jewish Theological Seminary, officiated at the “Bris Milah” ceremony; which was performed by Dr. Bernard Davidoff.

The child was given the name of Albert, after his distinguished godfather.

Following the ceremony, Professor Einstein presented the child with a fine photograph of himself, bearing an original autographed rhymed poem in German addressed to young Albert, and specially written by Einstein for the occasion. Following is a reproduction from the German original, as well as a free translation into English: ######When others often shame thee, And injure or defame them, Think also they came here Without having asked for it.

Think: tho’ you may not like it, You, too, plague others often. As this cannot be undone, Think well of every one!

To little Albert Landau on the occasion of his entering into the world.