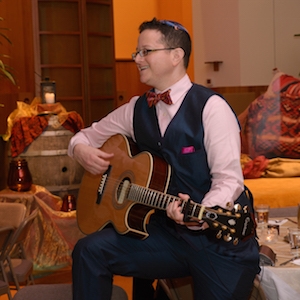 The Reform movement’s rabbinical seminary has accepted a transgendered person, paving the way for what is believed would be the first ordination of a rabbi to have switched genders.

The Hebrew Union College-Jewish Institute of Religion in Cincinnati confirmed this week that it accepted a male rabbinical school applicant who used to be a woman.

The prospective rabbi, Reuben Zellman, 24, of Oakland, Calif., who considers himself “transgender and queer,” said he is not attempting to spark religious debates nor become a political lightning rod.

“As far as I know, I am the first person to do this, but that’s not why I’m doing it,” Zellman said.

“I realize it has political ramifications and I think those are positive, but I’m becoming a rabbinical student because that’s what I want to do with my life,” he said in a telephone interview.

Zellman — who was open about being transgender throughout the admissions process — was accepted “on his own merits,” said the school’s National Director of Admissions, Rabbi Roxanne Schneider Shapiro.

“Certainly we listened to the story he had to tell. But Reuben was an outstanding candidate.”

When Zellman begins his rabbinical training late this summer, he will be breaking new ground for the nation’s largest denomination.

In 1990, the Reform movement became the first to ordain gays and three decades ago pioneered the ordination of women.

It also comes as the Conservative movement, the next largest stream in America, wrestles with the question of how Jewish law should treat homosexuality. And at least one Conservative rabbi has raised a question about transgender issues, according to a top Conservative official.

Rabbi Richard Address, director of the department of Jewish family concerns of the Union of American Hebrew Congregations, the Reform movement’s congregational arm, hailed the news about Zellman’s admission.

“I see it as a historic move, but I also see it as a continued progression of the philosophy of the Reform movement,” Address said.

Zellman will join between 57 and 65 rabbinical students who will be beginning their rabbinical training later this year.

Many, including Zellman, are expected to spend their first of five years at HUC’s Jerusalem campus.

For Zellman, who has committed himself to going, it will be the first time visiting the Jewish state.

Raised in what he called a “not very observant” Reform home in Los Angeles, Zellman went to Hebrew school and became a Bat Mitzvah. He declined to reveal his previous name.

In 1996, Zellman, still a female, entered the University of California at Berkeley and studied linguistics, later earning a second degree in classical voice.

In 1999, Zellman said he “transitioned” from being a woman to a man, though he would not discuss the emotional or physical details of that process.

“I just felt, at the time, that I would be happier living in the world as a man, and so far, I’m right.”

Although Zellman would not say whether he’s undergone a sex-change operation, he should be considered a man if he is living as one, said Scott Gansl, president of the World Congress of Gay, Lesbian and Bisexual Jewish Organizations.

Soon after he transitioned, Zellman joined Congregation Sha’ar Zahav in San Francisco, a largely gay synagogue affiliated with the Reform movement that bills itself as including “people of all sexual identities.”

When other members realized Zellman could “carry a tune,” he began singing with the synagogue’s chavurah and even led some services.

A Bay Area cantor took Zellman on as a student in 2001, and that spring, Zellman — at the age of 21 — was hired to perform High Holiday services at Temple Beth Sholom in San Jose, Calif.

Zellman originally hoped to become a cantor, but eventually decided that it “doesn’t encompass the full scope of what I want to do.”

He wants to study Torah, get trained as a pastoral counselor and “give others the kind of vibrant, living Judaism my congregation has given me.”

Zellman also sees tikkun olam, or repairing the world, as part of his rabbinical mission to work “for justice and peace.”

And as a transgendered person, Zellman feels he has much to contribute to that effort.

“I’ve had a unique and complex experience, which has deepened my connection to, and love for, the Jewish people’s complex and unique experience,” he said.

Zellman hopes to become a pulpit rabbi, yet recognizes that he may encounter problems finding a job because of his background.

“I may be a little different,” he said.

“I realize some people believe there is something wrong with transgendered people, but I have a lot of faith in the Jewish people, and faith that people will take this opportunity to apply the best of our Jewish values and be open- minded.”

Address of the UAHC said Zellman should not prove as “revolutionary” a rabbi as he would have even 15 or 20 years ago.

“It will always be a concern for some who want to make it an issue,” he said.

“But I am confident that five or six years from now, Reuben will find a place within the community that suits his needs and vice versa.”

Representatives of Judaism’s other major movements are more uncertain about the advent of a transgendered rabbi.

Neither officials at the Conservative movement’s rabbinical school, the Jewish Theological Seminary in New York, nor at the Orthodox Yeshiva University, which is affiliated with the Rabbi Isaac Elchanan Theological Seminary, would comment on Zellman’s acceptance by HUC.

Daniel Aronson, dean of admissions and recruitment at the Reconstructionist Rabbinical College in suburban Philadelphia, said the movement’s seminary and the movement in general would accept transgendered Jews “wholeheartedly.”

“Whether a person is transgendered or not, that in itself would not be a cause for rejecting a person,” Aronson said.

Though the Reconstructionist seminary has never received any applications from transgendered people nor had any post-graduates change sexes, Aronson added that some years ago one male rabbinical student “was feeling his way around” changing his sex but decided not to.

Meanwhile, Rabbi Joel Meyers, executive vice president of the Conservative movement’s Rabbinical Assembly, maintained that according to Jewish law, “a transgendered person would be violating the halachah against self- mutilation.”

“I think what we would want to ask is, what is the status of such a person?”

Meyers said one Conservative rabbi he would not identify has raised that very question. The movement’s Committee on Law and Standards would have to consider the matter and issue a response that would form the basis of an official stance.

Rabbi Edward Reichman, a physician at the Albert Einstein College of Medicine of Yeshiva University and an authority on Jewish law and gender change, said halachah “considers sexual identity to be innate, and not changeable by any kind of operation.”

However, those who feel trapped in the wrong gender are encouraged to undergo medical or psychological treatment short of any procedure that alters their sexual organs, he said.