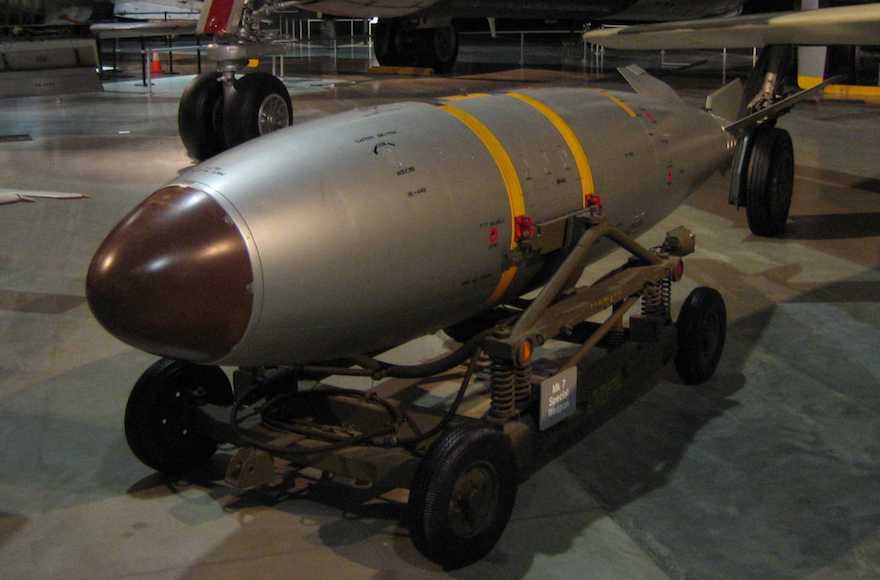 New information about a secret 1950s nuclear deal between Israel and Britain has shed fresh light on the development of Israel’s presumed nuclear program and might embarrass the current British government. Revelations that the government of Prime Minister Harold Macmillan in 1958 covertly sold Israel 20 tons of heavy water — vital for producing weapons-grade plutonium — may prove awkward for Britain, which is an active participant in European efforts to pressure Iran over its nuclear ambitions.

News of the deal, kept secret from both British government ministers and the U.S. administration until official documents were obtained by the BBC last week, has spurred campaigners to lobby for further information and action on Israeli arms.

The Campaign for Nuclear Disarmament urged the government to “come clean” over the part it played in Israel’s presumed development of nuclear weapons.

“Now we know that the British government was responsible for the Israeli nuclear weapons program. This is a further shocking example of Britain’s nuclear hypocrisy.”

“Israel is in breach of international law in its illegal development of nuclear weapons, and Britain, as a signatory to the Nuclear Non-Proliferation Treaty, should not be involved with any arms sales that could enhance Israel’s nuclear capability, which is a threat to the peace of the whole region,” he said.

Israel, which is not a signatory to the nonproliferation treaty, is believed to have as many as 200 warheads.

Israel officially refuses to confirm or deny the existence of any nuclear arsenal, but Labor Party head Shimon Peres confirmed to an audience of American Jewish leaders in 2003 that Israel has nuclear weapons. However, Peres was not a member of the government at the time and so was not speaking in an official capacity.

Peres was the driving force when Israel built its Dimona nuclear reactor in the 1950s with the assistance of France, which provided four tons of heavy water, not enough to manufacture plutonium for use in weapons.

At a time when only the United States, Russia and the United Kingdom had nuclear missiles, the Eisenhower administration was against Israel developing nuclear arms and refused to supply heavy water without guarantees that it would be used only for peaceful purposes.

Documents recording the British deal reveal that Donald Cape, then an official in Britain’s Foreign Office, said, “on the whole I would prefer not to mention this to the Americans.”

No “peaceful use only” terms were imposed on the shipment, since British officials thought “it would be somewhat overzealous for us to insist on safeguards.”

Yair Evron, a defense and international-relations expert at Tel Aviv University, said Britain’s primary motive for the deal appeared to be economic, with the consignment worth nearly $35 million in today’s money.

“One can argue that the nuclear and industrial-military complex sometimes pursues its own policies without government direction,” Evron said. “Similarly, one should put this in a different historical context. From the creation of the nonproliferation regime in the late 1960s, things like this became less accepted because the transfer and export of nuclear materials and technology was delegitimized.”

The extent of Israel’s nuclear development became known in 1986 when Mordechai Vanunu, a technician at the Dimona plant, passed secrets to a British newspaper. He served 18 years in an Israeli prison for his revelations and remains subject to restrictions imposed upon his release last year.

Ernest Rodker of the London-based Campaign to Free Vanunu said his organization had begun lobbying legislators to press the government on the issue when Parliament reconvenes after the summer recess.

“I think it is severely embarrassing for the British government,” he added. “You have a country that has pushed for a nuclear-free Middle East, and then you discover it has not only helped Israel develop nuclear power but its nuclear arsenal.”

The heavy water was left over from a shipment the U.K. bought from Norway in 1956. Though two successive 10-ton loads were shipped from a British port, it was presented as a transaction between Israel and Norway.

Israel wanted to buy more heavy water three years later, but by that time the existence of the Dimona reactor was known and British government officials decided against further involvement.

“We have been far from satisfied by the assurances so far furnished by the Israelis of the exclusively peaceful nature of their operations,” Henry Hainsworth, head of the Foreign Office’s atomic energy department, wrote at the time. “I should be strongly opposed to letting them have a further five tons.”

“I am quite sure we should not agree to this sale,” agreed Sir Hugh Stephenson, one of the most senior officials in the Foreign Office. “The Israeli project is much too live an issue for us to get mixed up in it again.”

The subject was raised once more when Israeli Prime Minister David Ben-Gurion arrived in the U.K. for an official visit in June 1961.

“I saw Mr. Ben-Gurion this afternoon and told him of our concern about the Israeli nuclear reactor in the Negev,” Macmillan wrote in a classified memo. “Mr. Ben-Gurion explained that its object was to train personnel in preparation for an atomic energy program in 10 or 15 years’ time, aimed at providing cheap power for taking the salt out of sea water to irrigate the Negev.”

But according to Macmillan’s notes, Ben-Gurion said it would be impossible to accept international inspection at Dimona, as “this would mean bringing in the Russians and Arabs.”