Sept. 11: One Year Later As Nation Marks 9/11 Attacks, Jews Remember Their Loved Ones 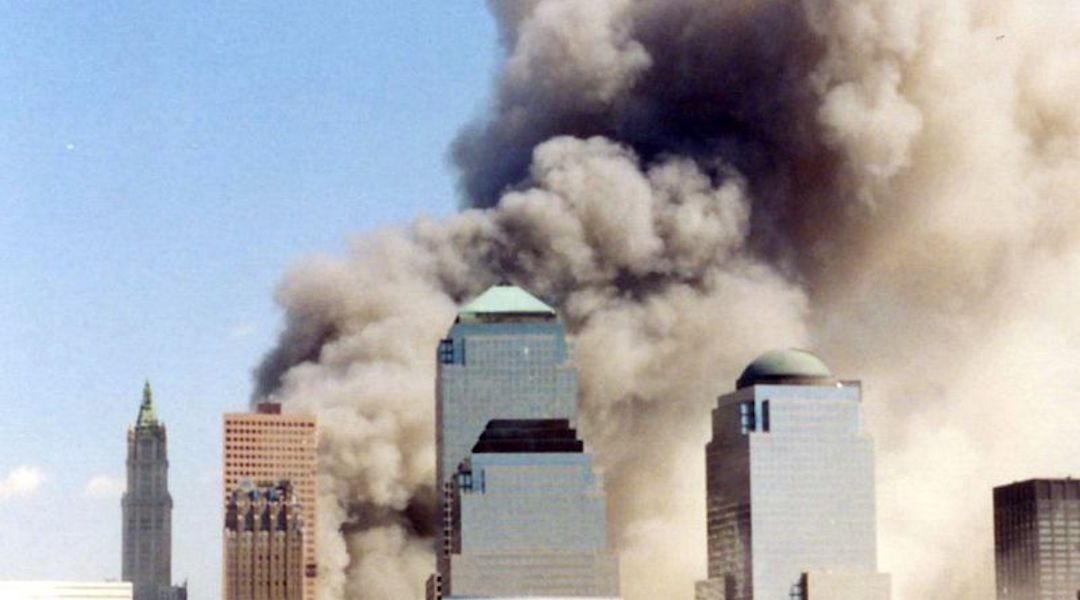 Standing amid thousands of people who lost loved ones on Sept. 11, a year ago almost to the minute, Kass said he would recite a special El Malei Rachamim, part of the traditional Yom Kippur Yizkor, or remembrance service, for them this year.

“I always say El Malei Rachamim in memory of the victims of the Holocaust,” Kass said, “and this is our own American Holocaust.”

Kass was standing several stories below street level, in the vast open construction pit that is now Ground Zero. In his blue dress uniform, white gloves and blue Torah lapel pins, he was swept up in a sea of thousands of blue uniforms streaming into the site for Wednesday’s ceremonies marking the first anniversary of the terror attacks that felled the World Trade Center’s Twin Towers — and killed more than 2,800 people.

Across the country, cities and towns marked the first anniversary of the attacks that shocked a nation and defined an era. Like other families of victims, Jews who lost loved ones revisited the enormity of the tragedy Wednesday, realizing that those hijacked airplanes that came out of a clear blue sky a year ago had changed their lives irrevocably.

Though Kass had been to Ground Zero many times over the past year, he preferred not to dwell there Wednesday.

In the days immediately after the attacks — when Ground Zero was a seven-story-high, smoldering mountain of twisted steel and glass — Kass had been there, ministering to police and other rescue workers digging for victims.

He was there dozens of times during the cleanup, as police and victims’ families accompanied him and asked him to “pray for the souls” of the missing.

On Wednesday, though he spent nearly an hour in a long procession to reach the site, Kass stayed at Ground Zero only for a few minutes, stopping near an impromptu memorial circle of red, yellow and purple roses.

The site “never looked this good,” he said.

But he quickly added, “Let’s go. Sometimes it just gets to you.”

As Kass spoke, the names of the World Trade Center victims echoed across the 16-acre site. Rabbi Joseph Potasnik, chaplain of the New York Fire Department, joined other officials in reciting the names of the more than 2,800 victims.

Before he spoke, Potasnik said relatives and friends of the 14 victims on his list had asked him to make sure to pronounce the names correctly.

It was, he said, his most important mission of the day. In all, it took two hours and 20 minutes to read all the names.

In a high-tech world, where it often seems that people are reduced to bar codes or personal identification numbers, “names mean less now than they once did,” he said.

But reading people’s names, and meeting the people who loved them, underscores the importance of remembering each victim, Potasnik said.

In Jewish tradition, “Moses was referred to as ‘Moshe Rabeinu’ — Moses our teacher,” he said. “The title is secondary and the decency is first.”

Just a few blocks away, Holocaust survivor Fred Gompertz, 78, watched the ceremonies from a rooftop garden in the upscale building where he lives.

A year ago, Gompertz was in his 34th-story apartment in the development between New York Harbor and the World Trade Center when he saw people running and the Twin Towers burning.

A black cloud enveloped his window, the electricity went dead and Gompertz lost consciousness. Two days later his son discovered him and he evacuated the empty, dust-filled building, returning only three months ago.

He was in his family’s apartment in the German town of Gelsenkirchen in 1938 when Nazis smashed his father’s clothing store below on Kristallnacht — the night of broken glass.

“Nine-eleven was the second time I was damaged in my life,” he said.

Two days before the anniversary, Gompertz, a fashion designer, ventured downstairs to attend the unveiling of a police memorial.

“I head the Scottish bagpipes and I decided I must go down, to be with them,” he said.

He also walked around Ground Zero on Wednesday, and felt shaken.

She remained closeted in her museum office Wednesday, the same place she stood when she heard the sudden roar of airplane engines overhead a year ago.

“It flew right in front of the upper-floor windows” of the museum, she said. “I just remember this amazing explosion and a fireball.”

About 10 of the museum’s 90 staffers gathered in her office that day a year ago, protected by the museum’s louvered windows from the smoke clouds and flying debris outside.

Strangely, the museum’s electricity and phone lines escaped the disruptions that affected much of downtown after the attacks, and Spilka and the others watched events on television and surfed the Web for news as the day unfolded.

On Wednesday they all gathered again, eating chocolate Spilka served to soothe people’s nerves, again watching the events on TV.

“It was important for me to be here, with these people, who I am bonded to through history,” she said.

To mark the anniversary, the museum is hosting an exhibition through Jan. 5, “Yahrzeit: Sept. 11 Observed.”

The show features Jewish ritual objects such as a shofar sounded last Rosh Hashanah at Ground Zero, or a Book of Psalms read by volunteers who kept watch over the dead at the city’s Medical Examiner’s Office — for eight months.

Near Spilka’s office the museum displays two biblical phrases, “Remember, Never Forget,” and “There is hope for the future.”

Those words helped the museum staffers realize they could regroup, she said.

For Faina Saltsman of Brooklyn, there is not much hope. Her voice shows only weariness and pain.

As a child, Saltsman lost 60 relatives in the Holocaust. She, her husband, Alexander, and their son, Arkady, lived much of their adult lives in the Soviet Union. They immigrated to the United States from Moldova in 1990, soon after Arkady graduated from architecture school.

Arkady became a leading architect with the Wall Street firm

Skidmore, Owings and Merrill, which designed the Sears Tower. He was on the 105th floor of the north tower on Sept. 11, sent to show clients a plan for the Toronto airport.

He died in the catastrophe.

“The Holocaust reached us here,” Saltsman said. “My only child was taken from us. We have nothing left of him.”

Arkady, 45, did manage to leave a message for his wife, Zhanna, in the minutes after the attack, saying he was trapped and would call her again. Zhanna kept trying to call back, but never heard from Arkady again.

For Saltsman, Wednesday’s secular yahrzeit was “worse than any other day.” She could not venture over the Brooklyn Bridge to Ground Zero, she said, in part because she suffers from kidney problems and other ailments.

Instead, she volunteered for a nighttime candlelight ceremony at the Jewish Community House of Bensonhurst.

On the Jewish anniversary of her son’s death, which fell on Sept. 1, she joined a march through Brighton Beach organized by the Friends of Refugees of Eastern Europe, and helped call out the names of 16 Russian Jewish victims of Sept. 11.

She returned from that ceremony “destroyed,” she said.

The mood at Ground Zero was no less intense Wednesday. People everywhere displayed the names of their dead.

As for Kass, his daughter, Sarah, a graduate student in existential psychotherapy at London’s Regents College, stood by her father’s side. She, too, struggled to understand the past year.

She too gladly took the roses, water and packages of tissues volunteers handed out.

“It’s hard to believe that this isn’t a construction site,” she said — “that it’s a burial ground.”