Some See Signs of New Intifada, but Others Ask, Did the Old One End? 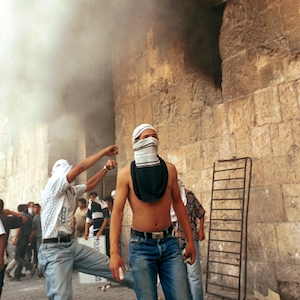 Those who believe that peace between Israel and the Palestinians is unattainable in the foreseeable future like to quote Moshe Dayan, a former Israeli army chief of staff. “What is the point of complaining about them,” Dayan said in a 1956 eulogy at the grave of Roi Rutenberg, a young kibbutznik murdered by terrorists on the border with the Gaza Strip. “Our enemies are out to save themselves. After all, they see across the way how we take their fields for our own… For we are a generation of settlers and by our sword we shall live…”

Then there is former Prime Minister Ehud Barak, who recently said that there would be no political settlement until 2028, when the Palestinian generation disappears that experienced the Nakba, or the “Catastrophe,” as the Arabs call their defeat in Israel’s 1948 War of Independence.

And some quote Robert Aumann, the Hebrew University professor who recently won the Nobel Peace Prize for his work on game theory: “This is a conflict that has lasted at least 80 years, and I don’t see that it will end in the near future.”

Hopes that Israel’s recent Gaza withdrawal would trigger renewed political momentum to end the conflict evaporated into the thin air.

So is the intifada back?

Some argue that it never really stopped. This argument is based on the long-term conflict concept of Dayan and Barak and on the Palestinians’ own definition of the present situation. All Palestinian factions, with the exception of Islamic Jihad, declared a sort of truce in the armed struggle against Israel last January.

But the Arabic term they chose — “tahadiya” — means “calming down” the fighting, not ending it. One way of looking at the “tahadiya” is to see it as just another intermezzo in a decades-long conflict, during which the terrorist groups are rebuilding their devastated military capabilities for the next round.

Likewise, according to this view, the so-called “second intifada” that has raged since late 2000 and which some say ended with the tahadiya — terror attacks have continued since then but at a slower pace — was just another chapter in the conflict, as will be any new round of violence.

But every phase of the conflict is different from the others. One thing that distinguishes the second intifada from the first, which lasted from 1987 to 1993, is that it came after a serious attempt to end the conflict.

During that period, which began with the Oslo peace process and ended with the failed Camp David summit in July 2000, extremist elements worked hard to reignite the flames, and sometimes succeeded.

Another thing that distinguishes the second intifada from the first was that the Palestinians have been far more armed and organized this time around, having taken advantage of the Oslo peace process to build a massive terrorist infrastructure, as well as a sizable P.A. security force that was supposed to confront the terrorists but instead often collaborated with them.

The first seven months of 2005 have witnessed a gradual but marked increase in attempts by the terrorist groups to renew the violence, according to figures released by Israel’s Shin Bet security service.

But a renewed round of violence is not a foregone conclusion. Even this week, there were signs of a potential lull in the fighting after several days of violence.

Palestinian officials declared Sunday that Islamic Jihad militants agreed to halt rocket attacks on Israel from the Gaza Strip, provided Israel ended its air raids. But the Israeli reaction reflected the fragility of the situation: Israel agreed to stop air raids, but vowed to continue operations against Islamic Jihad.

“There is intent to continue it until they cannot carry out any more suicide bombings,” Defense Minister Shaul Mofaz told the Israeli Cabinet.

Likewise, Islamic Jihad, which is sworn to Israel’s destruction, did not say that it would halt suicide bombings under its renewed truce commitment.

Even if violence is contained, neither Palestinians nor Israelis are sufficiently motivated to turn a new leaf, at least not right now.

With P.A. President Mahmoud Abbas concerned about the growing power of Hamas and Israeli Prime Minister Ariel Sharon on shaky footing in his own Likud Party, no one is prepared to make dramatic moves to break the stalemate. It’s in this political vacuum that Palestinian extremists flourish and a “third intifada” may emerge.

However, several factors would make a new round of violence much more difficult for the Palestinians:

The security fence between Israel and the territories has greatly impeded suicide terrorism, the Palestinians’ most effective weapon.

With its Gaza settlements gone Israel feels freer to act in the coastal strip, both in political terms — terrorists attacking from Gaza can no longer cite occupation as a justification — and in tactical terms, as there no longer is a threat of reprisal against Jewish settlements.

Palestinian public opinion, which in 2000 showed overwhelming support for violence against Israel, sees that terrorism has been catastrophic for the Palestinians themselves on the social, political and military levels, and now is more supportive of the political option that Abbas touts.

Israelis and most Palestinian factions, including Hamas, have no interest in rocking the boat before the Palestinian elections. Thus, some feel that even if the extremists succeed in reigniting the intifada, it will be a kind of “intifada lite,” a far cry from the past five bloody years.