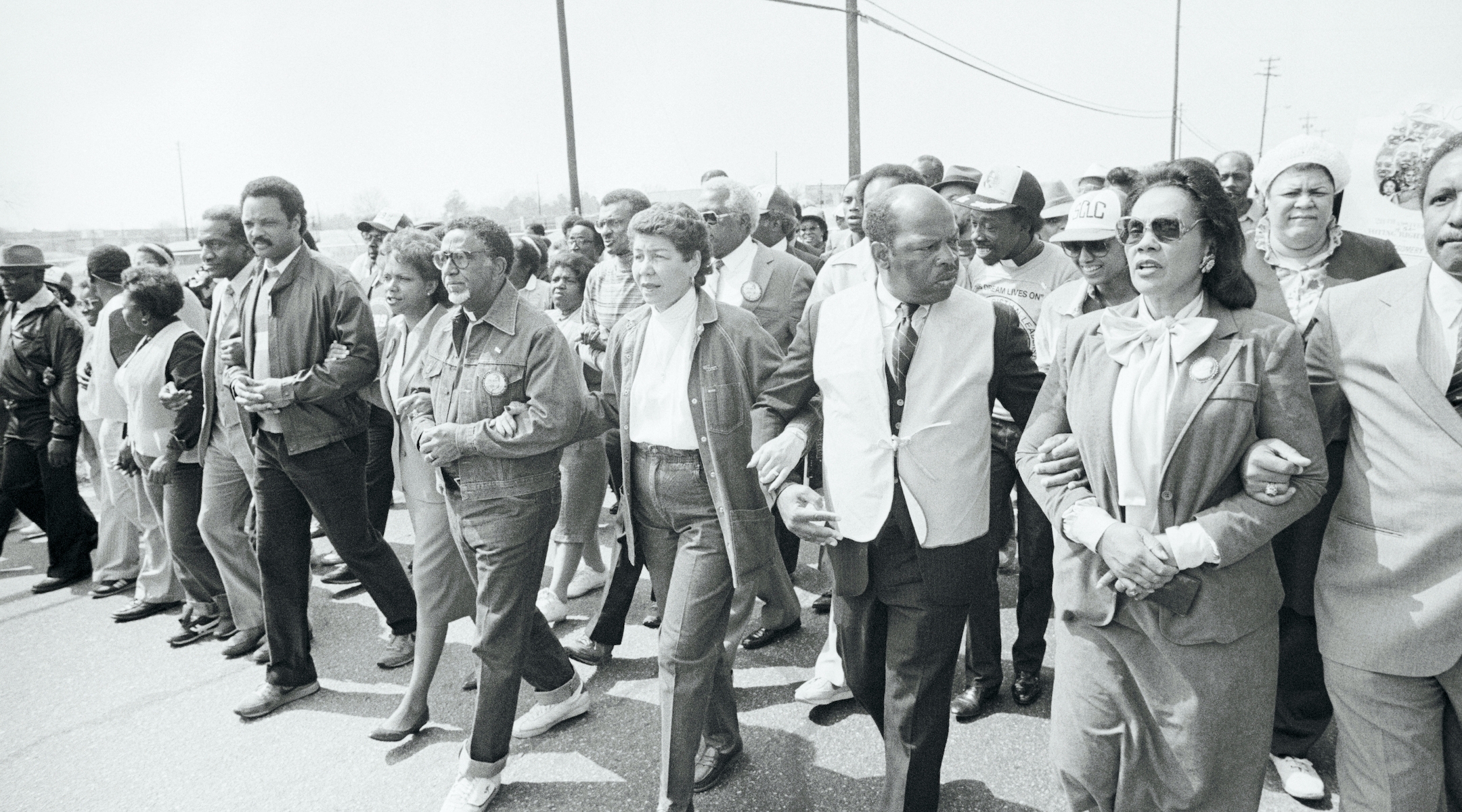 John Lewis, third from right, next to Coretta Scott King at a march marking 20 years since the famed Selma march in Alabama, March 7, 1985. (Bettmann/Getty Images)
See Original Daily Bulletin From This Date
Advertisement

Twenty years ago, it was “Bloody Sunday” in Selma, Alabama. Those who are too young to remember the tragic events in March of 1965, watched 20-year-old televised film clips showing Sheriff Jim Clark and his brown shirted posse tear into civil rights marchers with billy clubs, tear gas and bullwhips.

By contrast, Sunday’s commemorative march might be called “Sunny Sunday.” Under summery skies, Selma city police, including several Black women officers, impassively lined the streets of Selma as nearly 3,000 people reenacted the 1965 march across the Edmund Pettus Bridge. Alabama State Patrol cars lined the highway and official protective helicopters circled endlessly overhead, alert for any possible disruption. There was none.

At the crest of the bridge, leaders of the march, including Atlanta City Councilman John Lewis, who had his skull fractured in the 1965 march, and the Rev. Jesse Jackson, knelt for a brief moment of prayer.

Then, singing “We Shall Overcome,” the marchers continued up the Selma-Montgomery Road.

As it had begun in 1965, this week’s march started with a rally at the Brown’s Chapel AME Church. Today, the street on which the church stands has been renamed for Martin Luther King Jr. What the street was called in 1965 is lost to all but long-time Selma residents.

FORMER FOES GET TOGETHER

During church services preceding the rally, repentent Selma Mayor Joe Smitherman, who was mayor in 1965 as well, sat next to Jesse Jackson. The Rev. Joseph Lowery, head of the Southern Christian Leadership Conference, spotted Rabbi Alvin Sugarman of Atlanta’s The Temple standing in the rear of the church and invited him to the dais.

Later, Rabbi Sugarman addressed the rally in front of the church. Many of those who spoke to the assembly had been part of the march in 1965. The rabbi had been in Selma, too. But his experience was different. As he told the crowd, Selma was part of his territory when he was a travelling salesman in the early 1960s. “I was told,” he said, “When you get over there, don’t you talk religion, don’t you talk politics and don’t talk about segregation. You gotta keep your business connections happy.”

He then related an incident that happened only blocks from the Brown Chapel. “One morning I came in and a buyer phoned in and said he was late. He came in with mud all over his boots and said, ‘I’m sorry son, I was late; I was out in the field beatin’ up a bunch of niggers. ‘And he said that,” Rabbi Sugarman added, “as matter of factly as if he’d had a flat tire. I never walked in that man’s store again and two years later I left the business world and entered rabbinic school.”

Rabbi Sugarman grew up in The Temple under the spiritual leadership of Rabbi Jacob Rothschild, whose outspoken support of the Civil Rights movement affected not only his successor and his congregation, but the city as a whole.

The rabbi came to Selma this week with a busload of Atlantans representing the Black/Jewish Coalition, established by the American Jewish Committee’s Atlanta Chapter in 1982 to provide a forum for dialogue on issues of concern to Blacks and Jews in Atlanta.

Cecil Alexander, co-chairman of the coalition with John Lewis, rode the bus, along with his son and daughter. Alexander and his late wife Hermi were among the early supporters of the Civil Rights movement, providing a meeting place in their home where Black and white leaders could meet, away from the public eye. Sunday, he said:

“The Selma to Montgomery march was a watershed in history that led to legislative action that changed the face of America. The Jews at that time were concerned and involved with eliminating the blot of racism and discrimination in America, and supported and participated in many facets of the Civil Rights movement.

“Our concern is no less today that our country should live up to the promises of the Declaration (of Independence) and the Constitution and we join hands with Black Citizens of America commemorating this historic event.”

The bus left Atlanta soon after 9:30 a.m. after breakfast at The Temple. Though it wasn’t planned that way, the travellers were almost evenly divided among Blacks and Jews, with a handful of white Christians as well. No one could overlook the fact that several state and city officials might not hold their elected positions were it not for what happened at Selma and the ensuing enactment of the Voting Rights Act. These included Georgia State Representatives Tyrone Brooks, Douglas Dean and Billy McKinney and City Councilman Bill Campell.

Also on board was City Councilman John Lewis’s wife Lillian (celebrating her birthday) and their young son, John Miles.

Other passengers on the Coalition bus included representatives of Clergy and Laity Concerned (CALC), the Coalition of Conscience, the Martin Luther King Center for Non-Violent Change, American Jewish Committee, Anti-Defamation League of B’nai B’rith, the Atlanta Board of Education and others who wanted to walk in the footsteps traveled by Blacks and Jews 20 years ago.

Parents brought their children, both young and young adult, to share with them the commemoration of a unique moment in history.

There was even a rumor that Jesse Jackson had requested a seat on the bus, but not only was there a waiting list for seats, but it turned out that he needed to be in Selma earlier than the bus would arrive. As Sherry Frank, AJC’s Southeastern director, who initiated the bus trip, said, “The response from Black and Jewish leaders … was overwhelming. We had to turn people down when our bus filled up.”

Frank said, too, “This trip was a reaffirmation of our shared values, of our deep commitment to equality and social justice and to our rededication to the cause of human rights and civil rights. It is a symbolic act as well as a substantive act which allows us to strengthen our coalition and repudiate racism, anti-Semitism and bigotry.”