Special to the JTA Elie Wiesel; a Journey to Cambodia 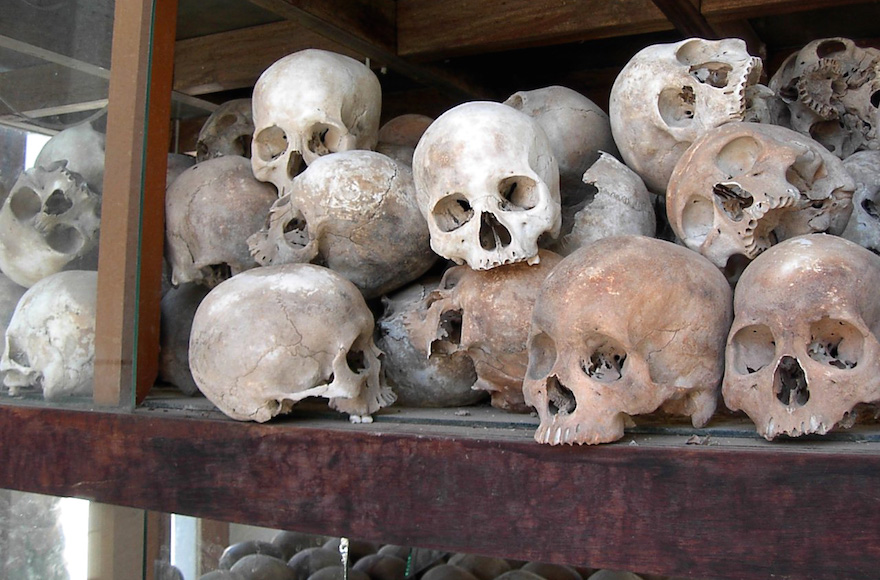 Elie Wiesel, the chairman of the President’s Commission an the Holocaust, returned last week from a visit to Cambodian refugee camps as port of a delegation organized by the Interschool Rescue Committee.

In an exclusive interview with the Jewish Telegraphic Agency, the world famous author and lecturer described the scenes which he, together with more than 100 leading personalities, including civil rights activist Bayard Rustin, Solksinger Joan Baez, actress Liv Ullman, and Rabbi Mark Tanenbaum who is the head of the interreligious affairs department of the American Jewish Committee saw as they journeyed to the Thailand border to see first-hand the condition and plight of the Cambodian refugees.

Characterizing the three refugee camps’ as “spectacles of horror,” Wiesel depicted them as resembling “pictures taken of DP camps after World War II” with scenes of “hunger, illness, misery, death and of children with emaciated bodies and wounded men and women.”

Noting that the foreign visitors were “deeply shaken” by the situation, Wiesel recalled that “the Cambodian children sensed our compassion and viewed us as representing salvation and so they jumped into our arms.” Nevertheless, the adult refugees responded to the International Committee very differently. “Some were very dignified in their misery, yet others resented our presence, ” Wiesel said

With estimates running as high as 1-3 million Cambodians murdered, Wiesel pointed out that what was particularly heartbreaking to him was that the refugees had resigned themselves to the idea that the Cambodian people had come to on end.”

While the entire visit was an exhaustive and possibly’ nervous experience, a touching personal moment for Wiesel occurred when he had to soy Kaddish for his father, whose yahrzeit fell during the journey. Wiesel, whose father died in Auschwitz, set out “to find 10 Jews at the border of Cambodia. I went from one group to another looking for a Jew here and a Jew there. Finally I got a minyan together to say Kaddish.” It was, he recalled, “a symbolic and very moving moment.”

When asked why he had decided to make this trip, Wiesel responded that “while I am not a representative of any group, ” he felt that “as a Jew I had to be there and see first hand what is happening and whether I could be of any help.” Citing the dire reports which had emerged about Cambodia, he noted that “if these reports that we have read in the last couple of months, the last couple of years, about the end of the Cambodian people were true, then we had to do something to prevent the end of the people.

Another element which moved the famous Holocaust survivor to make the trip was “the fact that so many people use the word Holocaust’ with regard to Cambodia.” Wiesel, who himself is a survivor of two concentration camps, noted that “I am always advocating the utmost care and prudence when one uses that word.” The term “Holocaust is copyrighted by the Jewish people and by Jewish destiny, “he said. And while he noted that the events taking place in Cambodia were “coming very close to a total disaster,” the situation “is more like a civil war than genocide since Pol Bot is killing its own people.”

Wiesel also recounted his own pleading with fellow members of the delegation not to use the word “Holocaust” to describe the evens taking/place in Cambodia. “No one should ever make such analogies with regard to any event …. Every tragedy deserves to have its own words and Cambodia does too. It is horribly’ tragic,” yet he added that whenever events are studied in the light of the Holocaust, “they can be related but never compared.”

Wiesel, who noted that he mode this trip because “no one come for me when I was there, ” was asked whether as a Holocaust survivor he had ever imagined that after the end of World War II anything ever resembling or approximating the violence and death of the Nazi period would ever occur again.