Spielberg Says ‘Remember Holocaust’ As He Accepts Awards for ‘Schindler’ 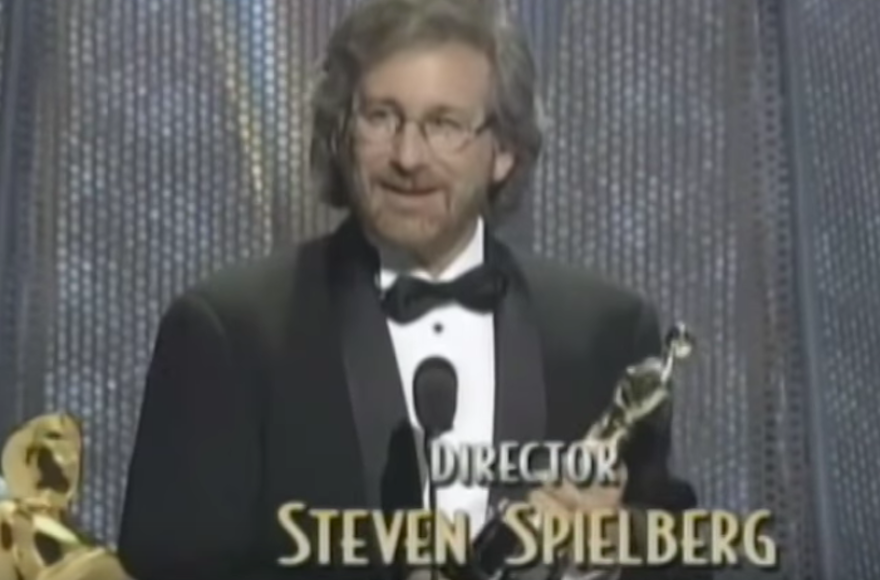 Steven Spielberg made an emotional plea to not forget the Holocaust as he accepted one of the seven Academy Awards bestowed on his film, “Schindler’s List.”

There are 350,000 survivors alive, who can still bear witness to the Holocaust, said Spielberg, adding, “These are 350,000 experts who just want to be useful for the remainders of their lives. I implore all educators, do not let the Holocaust remain a footnote in history. Listen to the words, the echoes, the ghosts.”

Spielberg also could not mask his satisfaction at finally winning the coveted Oscar, an award that had eluded him until now.

The triumph was sweet for the 46-year-old Spielberg, nominated as best director three times before without getting the nod. The point was not lost on Spielberg, who alluded to “the best drink of water after the longest drought in my life” in his acceptance remarks.

The evening’s proceedings were made even sweeter, when Spielberg’s “other” 1993 movie, the monster hit “Jurassic Park,” won three Academy awards for visual effects, sound and sound-effects editing.

What little tension the three-hour show provided came early on, when “Schindler’s List,” after winning the evening’s lead-off Oscar for art direction, had to wait for an hour to pick up the second prize for original musical score.

“Schindler’s List” was nominated in 12 categories and some enthusiastic critics had predicted that the picture might take the whole lot, setting a new Hollywood record.

In his two brief acceptance speeches, one as director, the other as co-producer of the best picture, Spielberg paid tribute to Poldek Pfefferberg, one of the “Schindler Jews,” who persuaded Thomas Keneally to write the book and Spielberg to make the movie. He also dedicated the film “to the 6 million who can’t be watching among the 1 billion viewers tonight.”

Even more dramatic were the acceptance remarks by the film’s co-producer, Branko Lustig. “My number is A 3317,” he said. “I am a Holocaust survivor. It is a long way from Auschwitz to this stage. I saw many people die and their last words were, ‘Be a witness to my murder. Tell the world how I died Remember.’

“I hope I have fulfilled my obligation to the 6 million Jews killed in the Shoah and to other Nazi victims,” Lustig said.

As an odd sidelight to the global acclaim for “Schindler’s List,” it was revealed Monday that the government of Malaysia has banned the film, partially on the grounds that it is too sympathetic to the Jews and too beastly to the Nazis.

In a letter to the film’s international distributor, the Malaysian film censor noted that “the story of the film reflects the privilege and the virtues of a certain race only.”

After describing scenes showing Nazi brutalities against Jews, the censor objected that “it seems the illustration is a propaganda with the purpose of asking for sympathy, as well as to tarnish the other (German) race.”

A translated copy of the Malaysian letter was obtained by Neil Sandberg, director of the American Jewish Committee’s Pacific Rim Institute, who sent a protest letter to Malaysian Ambassador Dato Abdul Majid Mohamed.

Sandberg asked for a reversal of the ban and said the suggestion that “Schindler’s List” is “a self-serving propaganda picture seeking to gain sympathy for the Jews is a moral outrage.”

Malaysia, a predominantly Muslim country, had a similar reaction in 1984, when Zubin Mehta and the New York Philharmonic were planning to give a number of concerts in Malaysia.

The program was to include a work on Hebraic themes by Jewish composer Ernest Bloch. The Malaysian government asked that the piece be deleted. Instead, Mehta canceled the tour.