Tens of Thousands of Jews, Non-Jews March to Protest Synagogue Bombing in Paris 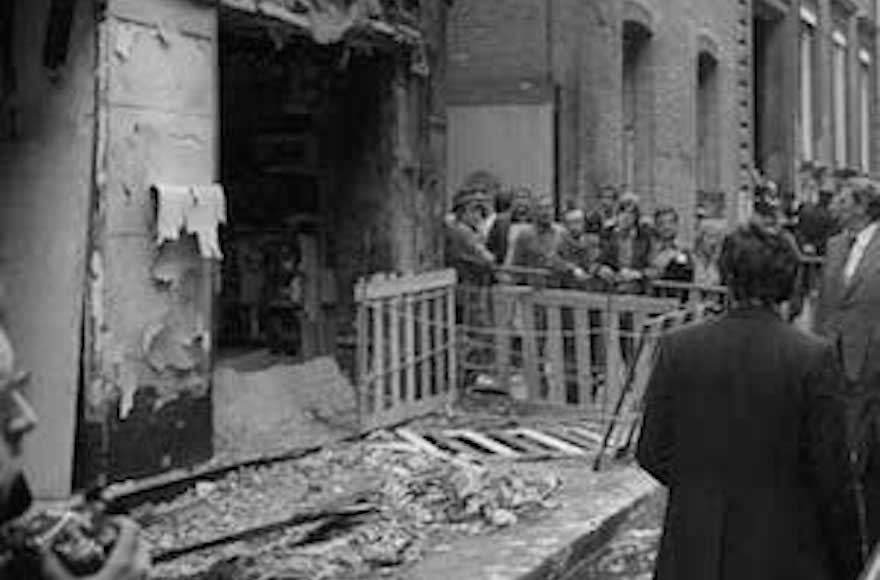 Tens of thousands of Jews marched today for the third consecutive day to protest the bomb attack on a Paris synagogue Friday night in which three people were killed and 33 were injured. It was the worst anti-Semitic attack since the end of the war and the first to have caused fatalities. It capped a series of anti-Semitic attacks last weekend for which a neo-Nazi group, the European National Fascists, claimed responsibility.

President Valery Giscard d’Estaing has personally taken over the police investigation and Prime Minister Raymond Barre and Interior Minister Christian Bonnet have ordered special units of France’s riot police to guard all Jewish schools, synagogues and institutions. Police guards armed with machine-guns one conducting an around-the-clock patrol near all Jewish institutions and in business areas, such as the textile center, where there are large, Jewish concentrations.

Jewish defense groups, some belonging to the Jewish Defense Organization and some self-improvised, are also standing guard over Jewish schools, synagogues and other institutions throughout the country. Everywhere in Paris and in major French provincial cities young Jews, some carrying walkie-talkies and steel bars, are guarding institutions and entire city areas. They stop suspicious-looking cars and frisk passersby and motorists. Others say they plan to “seek revenge” for the synagogue bombing.

Jewish anger is so intense that Jewish demonstrators yesterday tried to storm the Presidential residence, the Elysee Palace, and the Ministry of Interior, and came close to clashing with French riot police. Tourists or passersby who seemed to conform to the image of neo-Nazis — those with short-cropped hair and wearing conservative dark suits — were harassed or beaten up. Some were seen fleeing, with blood over their faces.

Simone Veil, President of the European Parliament, who was a former government minister, marched in one of the demonstrations. She was surrounded by an angry crowd which reproached her for “supporting the government.” It took riot police close to 20 minutes to extricate her and her two companions, philosopher, Bernard Henri-Levy and artist Marek Halter, and escort them to safety.

All along the Champs Elysee, in the Place d’Opera and in the vicinity of the Presidential Palace, hundreds of demonstrators waved Israeli flags throughout the day and late into the night, with people shouting “Israel shall live,” and “Death to the Nazis.” The demonstrators and almost the entire French Jewish leadership blamed the government, Giscard d’Estaing, Barre and Bonnet for Friday nights tragedy.

TOO LITTLE AND TOO LATE

Yesterday the government promised Chief Rabbi Jacob Kaplan and Baron Alain de Rothschild, president of the Representative Council of Jewish Organizations in France (CRIF) that 200 police cars and three full companies of riot police — a total of some 600 police — will henceforth be assigned to special security measures for the Jewish community. But the Jewish community and many government opposition leaders feel, however, that these measures are too little and too late.

The country seems to be in a state of shock and there is a nationwide demand for speedy and energetic action. The feeling of solidarity with the Jewish community is such that France’s two major trade unions, the CGT and CFDT, have called for a nationwide strike Tuesday as a gesture of solidarity with France’s Jews. Work in factories, offices and public transportation will come to standstill for two hours.

Representatives of all social classes and political parties voiced support of former Premier Michel Debre’s statement. “No one can or will forget what took place in Paris Friday night.” Newspapers carried front page headlines. “Abominable,” declared France-Soir. “The Assassins are Among Us, thundered Quotidien de Paris.

Two days after the bomb explosion, Rue Copernic, where the Reform Rue Copernic Temple is located, looks as if it had been the target of an air aid attack. Burned out cars litter the streets; buildings in a 100 meter area are wrecked, their windows shattered and their walls blackened by smoke. Local residents say that a day after the bombing they could still smell the stench of smoke and burned bodies.

THE DEAD AND THE INJURED

The Reform synagogue, located in one of Paris most fashionable residential areas, was filled with worshippers who come to attend both the Sabbath services and Simhat Torah services. At 6:20 PM the worshippers suddenly heard a blast. The synagogue’s front gate was blown off, the ceilings coved in and the windows were shattered. Only a handful of people inside were injured. Most suffered slight wounds from glass shards and wood splinters.

The janitor of an adjacent building said “within seconds I could see dead bodies lying around and other people burning in their cars.” One of the dead was identified as Aliza Shagrir, 42, on Israeli film editor who was in Paris for a two-week holiday with her 17-year-old son. She was walking to the home of a friend to meet her husband when the bomb exploded. She died on the way to the hospital. A 14-year-old girl driving a moped had the skin of her face peeled off. An elderly woman had her legs severed. Most of the other dead and injured were either passing by the synagogue or milling outside.

Within minutes of the attack a crowd gathered at the scene. Jews from all over Paris who had heard the news on the radio arrived at the synagogue to join the worshippers. Bonnet, who arrived on the scene shortly after the blast, drew the wroth of the crowd. People shouted, “Shame,” “Resign.” A press photographer shouted at Bonnet: “My mother died in a concentration camp and now the same thing happens here.” Rabbi Williams shook his fist and cried out: “Shame on France and on all Frenchmen. Shame on you. Shame for what happened.”

Several people wept openly as Bonnet pledged “This thing will not repeat itself. I swear if to you.” He also appealed to the Jewish community to keep calm: “I feel tonight like a young Jew and I can imagine what you are going through. This is why I beseech you not to give in to violence and not to reply in kind. Trust the government and the legal authorities,” he begged.

The principal Jewish leaders were also at the scene. Rothschild was on the verge of tears. Yesterday, he appealed directly to Giscard d’Estaing to take “the extraordinary measures needed.” He warned that Jewish youth will have to guarantee the community’s security themselves.

But directly after the blast tempers were so high that both Rothschild and Jewish elder statesman Jean Pierre-Bloch appealed for calm.

Bloch, a former minister and prominent resistance fighter is known as an “activist.” His son, Gaullist Deputy Jean-Pierre, is reputed to be the head of the Jewish Defense Organization. On Friday night they and Chief Rabbi Kaplan, pleaded for calm. “Let us not start a cycle of cycle violence,” they said.

In spite of those pleas, demonstrations began, late Friday night at the Etoile. The crowds marched down the Champs Elysee. Israeli flags appeared by the hundreds. In the Jewish Quarter other Jewish youths gathered. They could be heard complaining about police laxity and incompetence. Small defense squads were formed. The first cars that tried to enter the area early Saturday morning were stopped by the new Jewish defenders, their passengers were scrutinized and their trunks were inspected.

A group of Jewish youths drove to a disco, “Bus Palladium,” reputedly a meeting place for rightwing activists, but found the police waiting for them.

Saturday morning began with a huge meeting at the synagogue itself. Over 10,000 people were massed there. Ms. Veil, herself an Auschwitz survivor, appeared shaken. Francois Mitterrand, the Socialist Party leader and probable contender for the Presidency next spring, showed up accompanied by most of his senior advisers. The Israeli Ambassador sat in the front row.

From the synagogue the crowd marched again to the Etoile and from there to the Champs Elysee toward the Presidential Palace and the Interior Ministry. The crowd grew rapidly and as many more continued to join the demonstrators, police had a difficult time preventing the marchers from approaching the government building.

Three young people were allowed through the police cordon and met with one of Giscard d’Estaing’s aides who told them that “the President is deeply moved. He has given orders that everything should be done to apprehend the criminals.”

Outside the government building people screamed and pushed. Ms. Veil, who marched with the crowd from the synagogue, was harangued and insulted. Fights broke out continuously. Passersby suspected of being rightwingers were punched and plummeted. A man, mistaken for neo-Nazi leader Marc Fredriksen, was beaten up. It turned out that he was a Norwegian tourist who spoke no French.

Meanwhile, French police have begun to implement government orders to protect Jewish institutions. Riot police equipped with machine-guns are stationed in front of every synagogue in Paris. In Strasbourg, the street on which the synagogue is located has been cleared of all vehicular traffic and all parked cars have been towed away. At the same time, hundreds of detectives are going through the files of rightwing organizations. Hundreds of people have been arrested since Friday night and have had their homes searched. However, according to police, no clues have been found as to the identity of those responsible for the synagogue bombing.

The police department’s trade union secretary held on impromptu press conference yesterday and disclosed that one-fifth of the members of the outlawed neo-Nazi organization, the Federation of European Nationalist Action, are policemen. He charged that “it is they who inform their neo-Nazi colleagues of all we do. They use police intelligence operations against the government and the police.”

According to Interior Ministry officials, this could be the like list explanation of police failure to apprehend the neo-Nazis who have carried out a dozen attacks on Jewish institutions over the last two years. These include the machine gunning last week of five Jewish owned buildings, including two schools and two synagogues, and last year’s bomb attack on a Jewish student hostel, Centre Medicis, which seriously injured 26 people.

Meanwhile, late this afternoon, one of those injured in Friday night’s blast died in the hospital, raising the death toll to four.