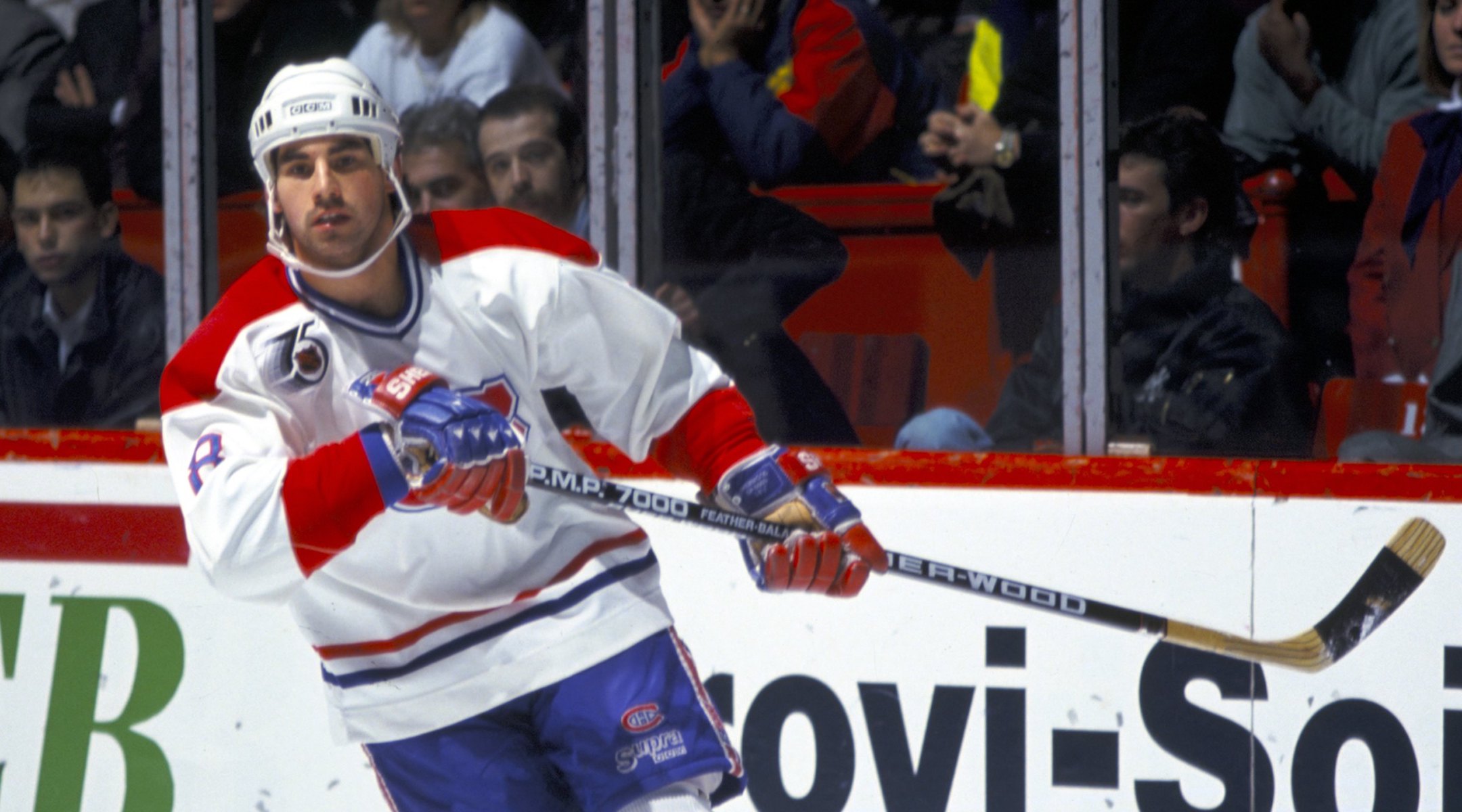 Mathieu Schneider played for the Montreal Canadiens from 1989 to 1995. (Denis Brodeur/NHLI via Getty Images)
See Original Daily Bulletin From This Date
Advertisement

Mathieu Schneider’s father calls him “the Wandering Jew.” And while, historically speaking, most Jews haven’t done their wandering on ice skates, it’s not difficult to see how the term applies to Schneider: Over the course of his 17-year National Hockey League career, he’s played in seven different cities, several of them more than once.

Currently a star defenseman for the Detroit Red Wings, he’s bounced from Montreal to Toronto to Los Angeles to Detroit; then back to Montreal and on again to Long Island, Toronto, Manhattan, Los Angeles and, once again, Detroit.

“I’ve been fortunate throughout my career to play in cities with tremendous Jewish communities,” Schneider, 36, told JTA. “I feel as though I’ve ben a role model in each city that I’ve played in. There are very few Jewish hockey players, and it’s been a nice role for me and I’ve really enjoyed it.”

In February, Schneider will be suiting up for another trip: this one to Turin, Italy, where the “Wandering Jew” will strap on his skates as a member of the U.S. Olympic Hockey Team. It’s the second time Schneider will be representing the United States on Olympic ice — and this time, Schneider says, he’s hoping to just enjoy the experience.

“The first time around there were so many uncertainties,” said Schneider, a native of New York, says of the 1998 Games. “It was the first time the NHL went to the Olympics. The travel was really tough.”

Along with Washington’s Jeff Halpern and Los Angeles’ Michael Cammalleri, Schneider is thought to be one of just three Jews in the NHL. He says his religion hasn’t been a problem for him on the ice.

Early on in his career, he recalled, there was an incident in which an opposing player unleashed an ethnic slur.

“That was the first time I heard any of that stuff. I made a mental note that the next time I had a chance, I would run the guy into the sideboards. And I did,” he was quoted as saying on the Jewishvirtuallibrary.org Web site.

But outside of that — and one other similar experience at the start of his career — “there’s never be any kind of taunting on the ice since.”

In the intervening years, he said, the NHL has instituted sensitivity training for its players, and Schneider thinks it’s working.

“I think society in general has become a lot more aware of it, and the sports world just kind of caught up,” he said.

Schneider, who maintains a home in California and is a member of the Jewish Community Center in Redondo Beach, Calif., said that over the years he has made an effort to sit out on Yom Kippur and fast. It’s generally not too hard, he said, because the High Holidays tend to fall during training camp and not during regular season play.

Schneider’s mother converted to Judaism to marry his father. Today, he said, “she’s probably the most knowledgeable of the whole family” about Judaism.

Schneider and his wife, who has been in the process of converting for the last couple of years, have three children — and one more on the way. They are, he said, being raised as Jews.

“As you get older, and especially when you have a family, religion becomes more important,” he said. “I was raised as a proud Jew and I believe a lot of the lessons Judaism teaches relate really well to family.

“In the times we live in, I think it’s very important to give children that sense of guidance,” he added. “Jews have always stuck together.”