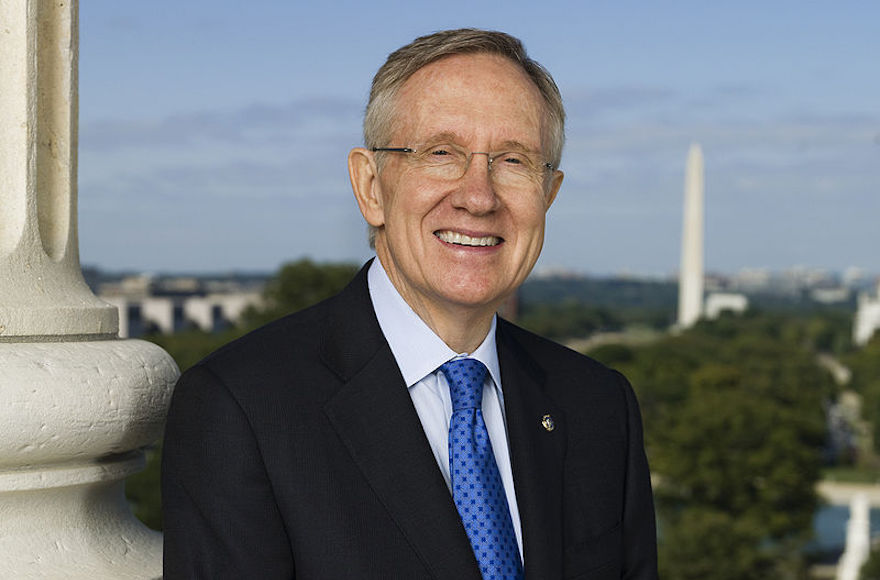 As a young lawyer struggling to make a living in Las Vegas, Harry Reid never failed to buy Israel bonds to benefit the United Jewish Appeal. “I’d say, ‘Harry, you can’t afford to give that much,’ ” close friend Neil Galatz recalls. “He’d say, ‘I can’t afford not to.’ ”

Reid, 67, is not Jewish, but his wife, Landra, was born Jewish. The couple converted to Mormonism shortly after they were married more than 40 years ago.

They raised their five children as Mormons but Galatz and others say Reid is fully aware that if they had lived in a different time and place — say, Nazi Germany in the 1940s — the family could have been targeted because of its Jewish roots.

Those close to Reid say it’s this realization that has prompted the Democratic senator’s longtime support for Israel.

As the newly elected majority leader in the U.S. Senate, Reid will play an instrumental role in crafting U.S. policy in the Middle East. Friends and political observers are confident his position on Israel won’t change.

Rep. Shelley Berkley (D-Nev.), who is Jewish, can attest to this. Berkley has known Reid for more than 30 years, having walked precincts for Reid when Berkley was a high school senior and Reid was running for Nevada state assembly.

“We have been close friends and political allies, as well, ever since,” she says.

Berkley describes her colleague as quiet, thoughtful, intelligent and tough.

“This is a man that was raised in Searchlight, Nevada, in a home that had a dirt floor and no indoor plumbing,” she says. “He is the very embodiment of the ideals of America: that it doesn’t matter where you’re from, you can rise to become one of the most powerful people in this country.”

Berkley remembers Reid attending dinners in Las Vegas where he bought Israel Bonds not because he had to, but because he wanted to.

“He had a passion and a commitment not only to the Jewish community, but to the survival of the State of Israel,” she says.

He’s “always been part and parcel of our community,” says Art Marshall, a past president of the Jewish Federation of Las Vegas and a close friend of Reid’s. “He’s a good guy.”

Marshall notes that Mike O’Callaghan, one of Reid’s mentors who later became Nevada governor, was himself very involved in the Jewish community. Following O’Callaghan’s example, Reid was actively involved in helping Jews leave the Soviet Union in the 1980s.

Meyer Bodoff, president of the Jewish Federation of Las Vegas, also praises Reid. Bodoff says the federation gave Reid its highest honor two years ago, an award that has been given out only three times.

Bodoff lauded Reid for helping the federation receive its first federal grant for a retirement community. He also praised his support for Israel.

Galatz, a Las Vegas lawyer, has known Reid since the early days of their careers, when the two lawyers used to try personal injury cases against each other. When Reid first ran for Senate in the 1980s, Galatz served as his finance campaign chairman.

Galatz describes Reid, a former boxer and runner, as a “workaholic” with a “good heart.”

Reid has a healthy respect for Judaism and likes to honor his wife’s past, Galatz says: When his mother-in-law was still alive, Reid and his wife would light Shabbat candles on Friday nights, and the couple still has a mezuzah on the front door of its home.

As Senate majority leader, Reid may face pressure from Arab organizations and other political groups to stop supporting Israel, arguing that it would ease other crises in the Middle East, Galatz says. While that concerns him, Galatz is confident Reid will use his skill as a consensus builder to secure Israel’s future and be a successful majority leader.

“This is not a guy who’s going to force his will on people and make earth-shattering speeches,” Galatz says. “What he is going to do is work effectively with the senators by trying to meld together opinion and consensus. This is one hell of a strong point in a U.S. senator.”

But political journalist and commentator David Broder contends that Reid’s oratorical skill, or lack thereof, could end up hurting him.

“As minority leader, Reid was remarkably effective in keeping the Democratic caucus united, but far less successful as a public spokesman for his party,” Broder wrote in a recent Washington Post column. “His partisan comments were often too sharp, his television appearances less than commanding. In his new role, he will be far more exposed, and his flaws more conspicuous.”

But Reid knows how to use those perceived flaws to his advantage, says Las Vegas Mayor Oscar Goodman, who has known Reid for more than 40 years.

Reid’s unassuming demeanor may make people think he’s a pushover, but that’s far from true, Goodman says: “When you do business with him, he’s hard as nails.”

That’s exactly what the pro-Israel community has come to count on.

In May 2005, before a meeting of the American Israel Public Affairs Committee, Reid told of his recent trip to the Yad Vashem Holocaust Memorial in Jerusalem. There, Reid said, he and his wife learned the fate of her father’s family, the Goldfarbs.

Landra’s father, Israel Goldfarb, immigrated from Ukraine to the United States in the early 1900s, but family members who remained in Europe weren’t so lucky: Seven of them were killed by the Nazis, and their names are listed in Yad Vashem’s book of martyrs and heroes.

Reid told the group of what a “difficult yet moving and inspiring moment” that had been. And on one particular point, the consensus-builder vowed to give no ground.

“The people of Israel have a right to live in peace,” he said. “On this point there can never be any compromise.”