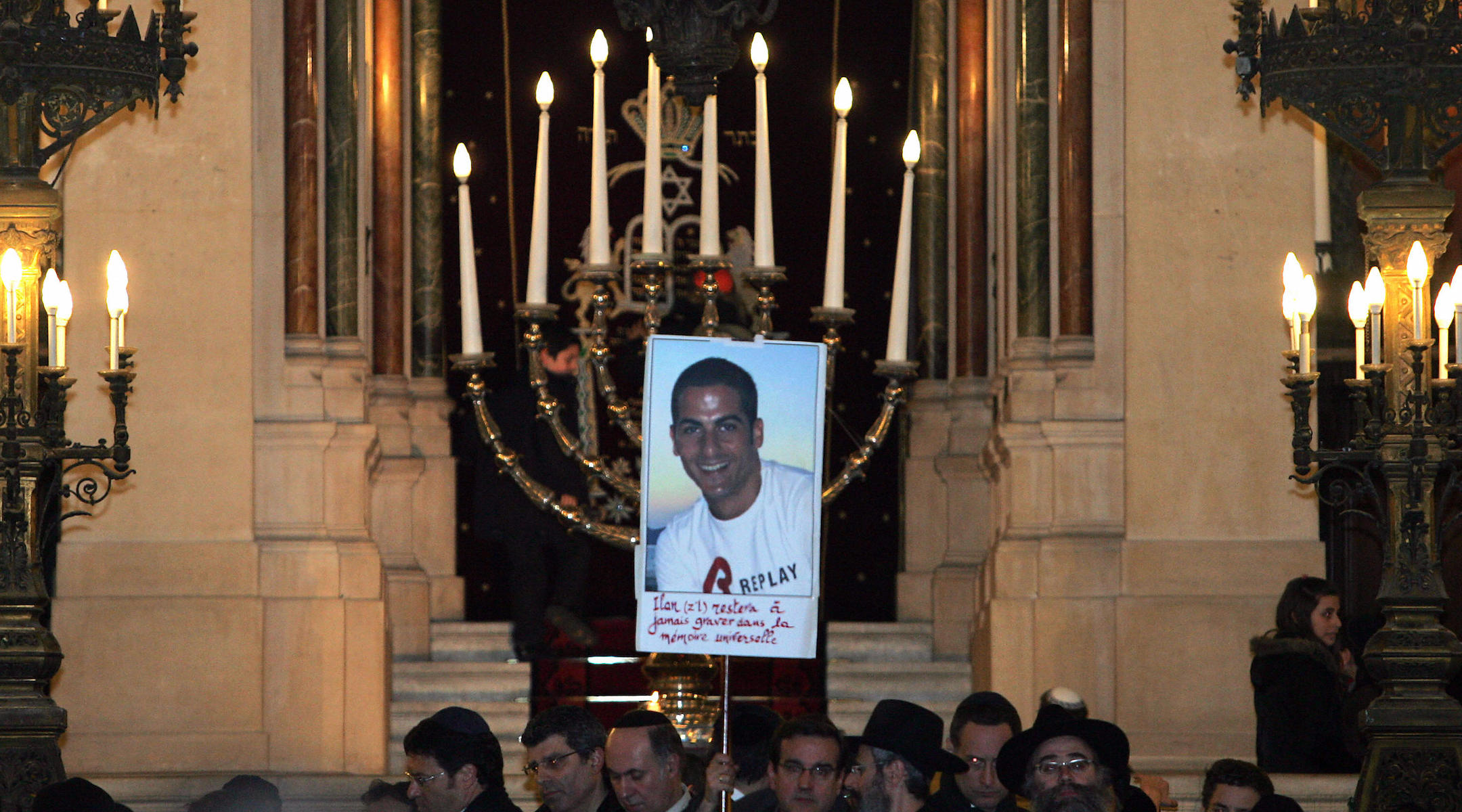 A man holds a portrait of Ilan Halimi after attending a religious ceremony for him at La Grande Synagogue de la Victoire in Paris, Feb. 23, 2006. (Jack Guez/AFP via Getty Images)
See Original Daily Bulletin From This Date
Advertisement

The brutal murder of a young Jewish man here is roiling the community and reviving questions over whether France is a safe place for Jews. In an incident that has dominated headlines across the country, Ilan Halimi, 23, was lured away from the store where he sold mobile phones on Jan. 21 by a woman, abducted and then held in a suburban housing project for three weeks by a criminal gang, where he was repeatedly tortured, according to French officials.

He was then dumped, barely alive and reportedly with burn marks all over his body, at a suburban train station on Monday, Feb. 13. Halimi died while being driven to a hospital.

Until this week, detectives investigating the case said they were not linking it to anti-Semitism.

But in a turnaround, Prime Minister Dominique de Villepin told a Jewish communal gathering Monday night that officials had decided to treat the case as an act of anti-Semitism.

De Villepin said the minister of justice had ordered that Halimi’s torture and murder be considered “premeditated murder motivated by religious affiliation.”

Villepin spoke at the annual dinner of the Representative Council of Jewish Institutions in France, or CRIF, the umbrella organization of secular French Jewish groups. In addition to pledging that the government would do its utmost to find Halimi’s killers, de Villepin vowed that the French government would fight anti-Semitism throughout French society.

The incident dominated discussion at the annual dinner, which attracts hundreds of ministers, elected officials, ambassadors and religious officials.

Ironically, de Villepin and CRIF’s president, Roger Cukierman, had hoped that a highlight of the dinner would be the announcement that anti-Semitic acts in France dropped by 47 percent in 2005 over the previous year.

Anti-Semitic attacks, largely committed by youths of North African origin, increased in France during the first few years of the Palestinian uprising against Israel. The increase was largely attributed to tensions over the Israeli-Palestinian conflict.

The climate for Jews had seemed to improve in recent months, as had France’s relations with Israel. The change came after Israeli Prime Minister Ariel Sharon’s visit to Paris last summer and the Israeli pullout from Gaza.

But the recent incident has rocked the community, with many saying they had felt all along it was a deliberate act against Jews.

After meeting on Tuesday with France’s interior minister, Nicolas Sarkozy, known for ordering the police crackdown against anti-Semitic violence in 2005, Cukierman said Halimi’s death “was one of the worst incidents for the Jewish community in France, if not the worst.”

At least 1,200 people demonstrated in Paris on Sunday to show their anger over the murder. The demonstrators shouted slogans and carried banners that read “Justice for Ilan” and “Avenge Ilan!”

At the CRIF dinner on Monday, guests expressed their horror and fear over the incident.

“These barbarians sound organized, so they must have known that Ilan didn’t have any money,” Evelyn Elbaz-Varsat, a lawyer attending the CRIF dinner said in a voice tense with emotion. “He was from a simple family from a modest suburb.”

Elbaz-Varsat said many people in the community are fed up.

“Over the past couple of years, many people have been talking about leaving France,” she said. “This might be the straw that breaks the camel’s back, though that is hard to say. In their hearts, people talk about Israel, but practically speaking, most people are thinking about the United States. Myself, I want to go to California.”

“It is possible that this did not start out as an anti-Semitic case,” said Meyer Habib, owner of a large jewelry concern in Paris. “But if Ilan were not Jewish, I think he would still be alive today. He died because he was Jewish.”

The victim’s mother agreed. She was quoted as saying, “If Ilan weren’t Jewish, he wouldn’t have been killed.”

At least 10 people, aged 17 to 32, have been arrested. The suspects, of North African and black African Muslim origins and of white French background, have been labeled the “gang of barbarians” by the French media.

The group’s alleged leader, identified as Youssouf F., has reportedly fled to the West African country of Ivory Coast.

French police officials said they originally thought the only motive of the kidnapping was money.

After questioning several of the suspects, the police reported that there had been six other kidnapping attempts, four of them against Jews. Officials said the suspects told police that because Jews were all rich, someone would find the money to ransom them. Only one of those attempts was reported to the police when it took place.

At Monday night’s dinner, de Villepin opened with a message to the Halimi family, saying, “I share your pain. We owe it to you to find the truth.”

Cukierman addressed the prime minister: “The Jews of France want to know the truth. Did Ilan Halimi die because he was Jewish?”

At a news conference after meeting with Sarkozy, Cukierman said that the police believe that gangs are controlling certain suburban districts, “and people do not want to talk.” He added that police had found documents in one apartment linked to Salafists, a radical North African Islamist group.

In a live forum on Jewish radio Tuesday, Cukierman told listeners that the CRIF had only learned of the kidnapping when the death was reported, because police had kept tight control of the case until then.

“I think the police are devoting considerable means and manpower to this case,” said Cukierman. “The proof is that arrests have been made, and the suspects are talking.

“Before that, there was failure,” he said. “Today we can say for sure that a man was killed because he was Jewish.”