Woodward, Bernstein Report Nixon Was Obsessed with Idea That a ‘Jewish Cabal’ Was out to Get Him 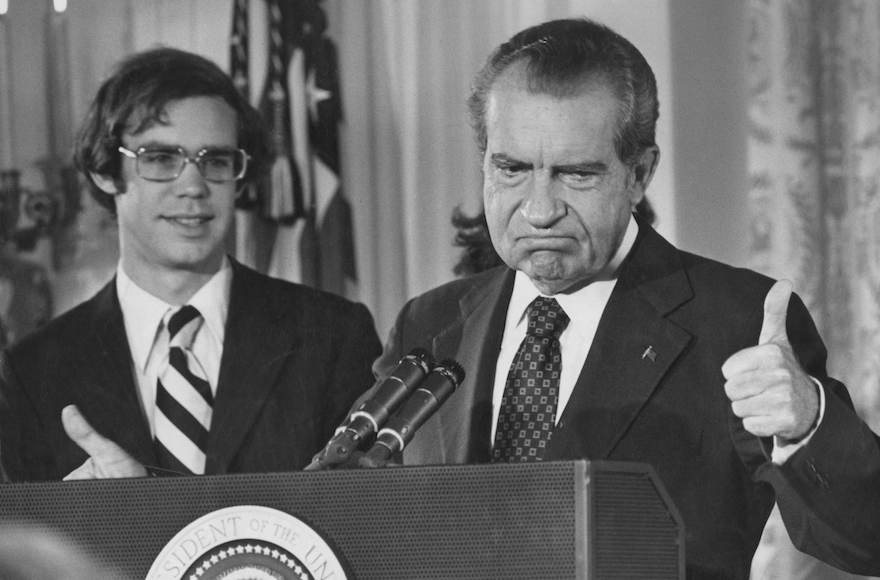 Richard Nixon (1913 - 1994) gives the thumbs up as he addresses the White House staff upon his resignation as 37th President of the United States, Washington, DC, 9th August 1974. His son-in-law David Eisenhower is with him on the left. (Photo by Keystone/Hulton Archive/Getty Images)
See Original Daily Bulletin From This Date
Advertisement

Former President Nixon’s obsession that there was a “Jewish cabal” out to “get” him most distressed Secretary of State Henry A. Kissinger who “was convinced that the President was anti-Semitic,” according to “The Final Days,” the new book by Bob Woodward and Carl Bernstein excerpted in the current issue of Newsweek magazine.

According to the authors, the young Washington Post reporters who cracked the Watergate scandal. “As the son of German Jews who had fled the Nazis, he (Kissinger) was particularly sensitive to what he regarded in Nixon as a dangerous brand of anti-Jewish prejudice born of ignorance. He saw in the President an antagonistic, gut reaction which stereotyped Jews and convinced Nixon that they were his enemies. The remark by Nixon which most often unsettled Kissinger was well-known to the President’s close associates: ‘The Jewish cabal is out to get me,'” Woodward and Bernstein wrote.

The authors stated that “Late in 1971 Nixon had summoned the White House personnel chief. Fred Malek, to his office to discuss a ‘Jewish cabal’ in the Bureau of Labor Statistics. The ‘cabal,’ Nixon said, was tilting economic figures to make his Administration look bad. How many Jews were there in the bureau? he wanted to know. Malek reported back on the number and told the President that the bureau’s methods of weighing statistics were normal procedure that had been used for years. Later, there was another suspected ‘Jewish cabal’ in another department.”

Woodward and Bernstein wrote that Nixon also expressed obsessive hatred toward “academics” and “goddam Ivy Leaguers,” though he “did, in fact, continue to approve appointments of academics, even Ivy Leaguers and Jews.” They said that Federal Reserve Board Chairman Arthur Burns, “himself a Jew, was convinced that Nixon was not truly anti-Semitic. There were, however, ugly strands of prejudice in the man, Burns had concluded. The President really didn’t have much love for humanity, Burns believed. Why should Nixon love Jews any more than Japanese or Italians or Catholics? Nixon regularly employed epithets for whole sections of mankind, he knew.”

But Woodward and Bernstein said Burns was disturbed that “if the President perceived that Jews or Israel or anyone else, for that matter, got in his way, he was prepared to stomp on them.” According to the authors, Burns “vividly recalled” a Nixon “tantrum” in 1973 over the Jackson Amendment. “Burns watched Nixon very closely on that occasion and he was impressed by the President’s fury. Burns felt that Nixon was saying that Jews might suffer for thwarting his will.” Woodward and Bernstein wrote.