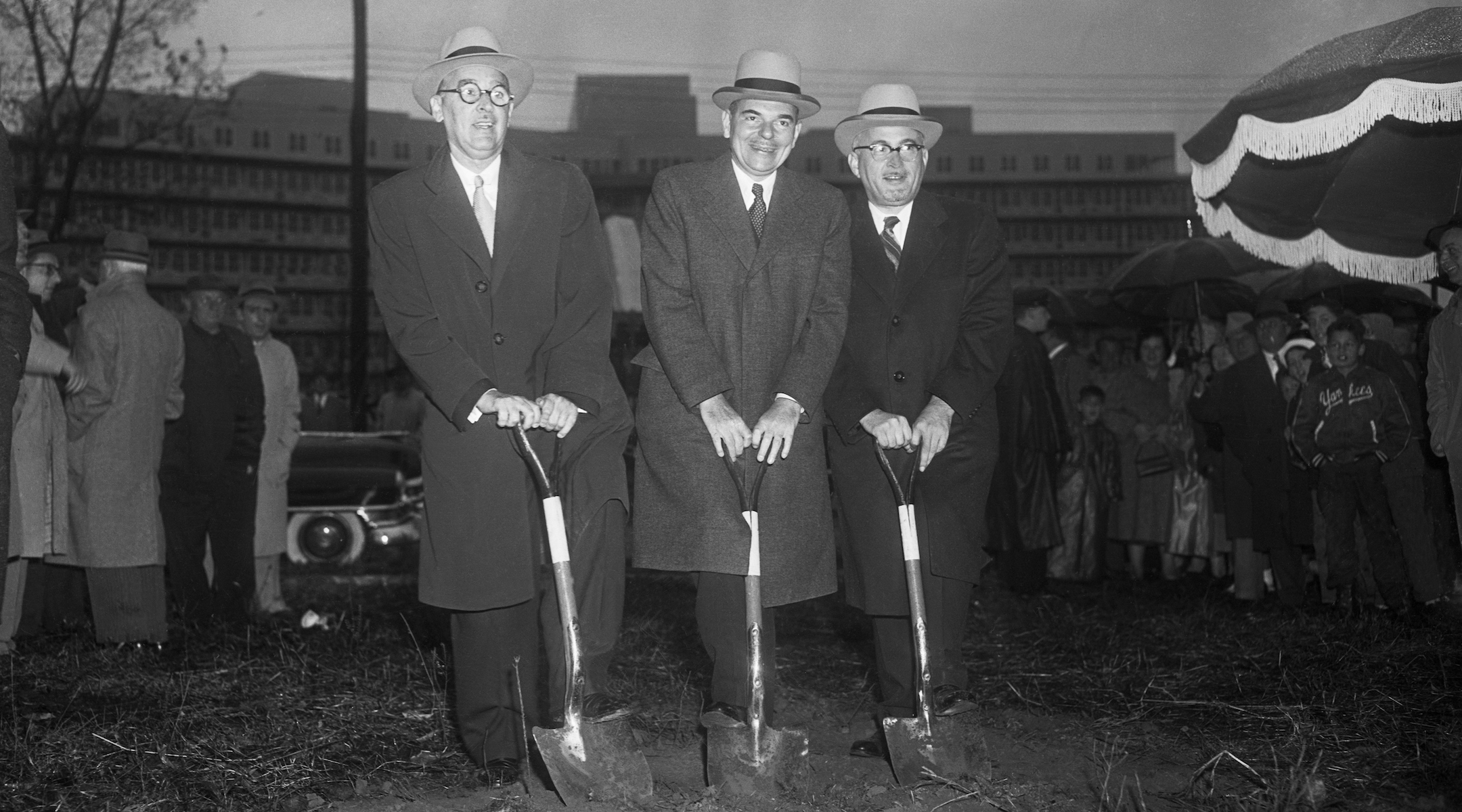 The cornerstone laying exercises for the first group of buildings of the Yeshiva College of America, an institution sponsored by Orthodox leaders for the purpose of combining Jewish and secular education for the training of rabbis, teachers and lay professionals, were held Sunday afternoon at the Yeshiva site in the presence of an audience exceeding 30,000. An automobile parade from the West Side Synagogue on Eighty-sixth Street to the Yeshiva grounds at Amsterdam Avenue and 186th Street, preceded the exercises.

A Megillah in Hebrew and English was deposited under the cornerstone, relating the history of the first Yeshiva in America and of the developments leading up to the rise of the present structure. The exterior of the first group of buildings is already completed

The ceremonies were attended by many Orthodox Jewish leaders, rabbis and contributors to the Fund, as well as by representatives of the national, city and state governments. Samuel Levy, chairman of the Executive Committee of the Yeshiva College, was master of ceremonies.

Joseph V. McKee, Acting Mayor and president of the Board of Aldermen, bringing the greetings of the municipality, said that the Yeshiva will do for its future pupils what modern universities are failing to do when they neglect the “immortal souls” of their student bodies.

“Our universities are teaching physical facts and forgetting to discipline the wills of their students,” he declared. “Thus they are bereft of the fruits of a full education.

Senator Royal S. Copeland said the planning and building of the Yeshiva project should be a cause for great satisfaction to American Jewry. Calling attention to the literal meaning of Yeshiva, a “meeting” or “session,” Senator Copeland said the new college was in line with an American tradition which began in the New England meeting house of the Seventeenth century.

Professor James C. Egbert, director of the University Extension at Columbia University, brought the greetings of Columbia and of President Nicholas Murray Butler. Dr. John H. Finley, former Commissioner of Education, welcomed the new college because, he said, it would preserve the gifts of the Jewish religion and culture for future generations in America.

The ceremonies were begun with an address by Harry Fischel, chairman of the building Committee and donor of $100,000 to the Yeshiva College Building Fand.

A letter from President Coolidge addressed to Dr. Revel was read. In his letter the President said:

“I regret that it is impossible for me to be present at the laying of the cornerstone of the new buildings of the Yeshiva Rabbi Isaac Elchanan. Marking as they do a new era in the development of your insitution of higher education, which stands for culture. learning and scholarship, and for religious training so vitally essential to the welfare of our country, the exercises on Sunday have a peculiar significance to all true Americans. Long eminent in philanthropic, social and communal work, the Jews of America, through the increased advantages at the disposal of the Yeshiva, will be able to broaden their field for the training of scholars and religious leaders for their people. This is of importance, not only to them but to our national life as a whole.

“I send my congratulations, greetings and best wishes.”

A cablegram of congratulations was received from Rabbi A. I. Kook, chief rabbi of Palestine.

The Hebrew text of the Megillah was read by Harris L. Selig and the English by Gustavus L. Rogers.

Music was furnished by the Hebrew Orphan Asylum Band and singing by the Jewish Cantors Association of America, led by Louis Lipitz, president, and Cantor Pinchas Jasinowski.

An additional fund of $200,000 was raised at the dinner given in the Grand Ballroom of the Hotel Astor Sunday evening in honor of the National Yeshiva Committee.

Samuel Levy acted as toastmaster. Louis Gold was chairman of the National Committee. Judge Rosalsky made the appeal, in which he stated :

“The vital problem of modern Jewry is to perpetuate orthodoxy. We wish our children to carry on the orthodox religion and with that in view, there must be teachers for them. We are asking you to revitalize Jewish life. Today the cornerstone has marked the laying of a foundation of learning on a firm basis. The college will be the great thing to teach men how to attract and hold Jewish children in the religion of their forefathers.”

Dr. Daniel I. March, president of Bosten University, was another speaker at the dinner. He said he brought the greetings of the largest university in New England-one of an enrollment of over 12,000 students-to the Yeshiva College. “There are two necessary things for the advancement of the human race-knowledge and character,” he said. “Yeshiva. by teaching both religion and scholarship, will be a great factor in a forward struggle.”

Dr. Frederick Robinson, president of City College, brought greetings from his institution and pledged a neighborly assistance for the new education center. He also stressed the matter of faith in the determination of character.

David A. Brown has been selected by a committee of eleven editors to receive the Gottheil Medal for 1926. This medal is awarded annually by the Zeta Beta Tan Fraternity to that American, Jew or Gentile, who shall be considered to have rendered the greatest service to the cause of Judaism in the year of the award.

During the first year of the award, for 1925, Rabbi Stephen S. Wise was selected in an election in which the names of Calvin Coolidge and Charles Evans Hughes were mentioned. This year the names of Dr. S. Parkes Cadman and Felix M. Warburg were mentioned.

The medal will be awarded on May 10th at a dinner of the members of the Zeta Beta Tau Fraternity at the Hotel Astor, New York.