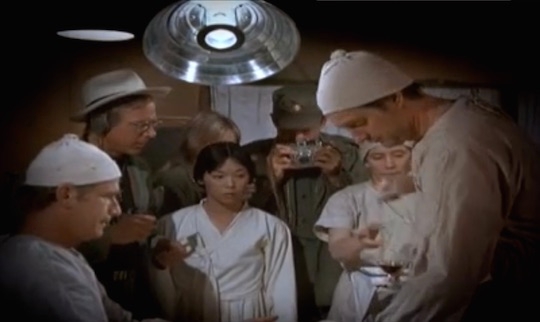 We already know Alan Alda does it all: diagnoses himself, eats rum cake off the floor, tests the best ways for fifth graders to learn about fire. But the man really outdid himself back in 1974, when he performed a circumcision at a ceremony communicated by Morse code, in M*A*S*H season 3, episode 8.

Written by suspected one-time bris recipients Everett Greenbaum and Jim Fritzell, the episode begins with a Korean woman who comes into the camp looking for a rabbi to perform a Jewish ritual circumcision — she’s married to a Jewish G.I. who’s away at the front. Hawkeye agrees to snip, but the 4077th only has a Catholic chaplain on hand, so the camp clerk finds a rabbi on an aircraft carrier who can conduct the ceremony via Morse code. He sails out of range before the priest can finish the final bracha — but luckily, wartime Korea hasn’t skimped on its adult Jewish education, and the new mother finishes the job with a “…v’imeru: Amen.”

On M*A*S*H, the Hebrew may be butchered, the Koreans and women not always fully realized characters. But with the series’ recent arrival on Netflix, a new generation has the pleasure of watching that most beloved show of our fathers’ basement rooms fumble toward an American comedy that jokes about — and with — all Americans. Including those of us with a little piece missing.