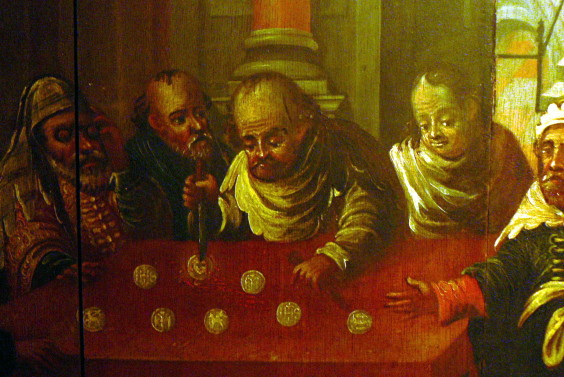 From the bowels of the Middle Ages comes yet another terrible mythology: that of the Jews’ desecration of the host—the Eucharistic representation of the body of Christ in bread form.

After Pope Innocent III recognized transubstantiation in 1215, the Jews found themselves in a familiar role: that of scapegoat. Accusations of host desecration became commonplace throughout Europe, frequently stemming from the belief of “Jewish deicide”—that Jews murdered Jesus Christ—and are often thought of as an impetus for many a medieval massacre and expulsion. Indeed, it was claimed that the Jews stole hosts to reenact the crucifixion by stabbing or burning them.

Since the accusations were typically one person’s testimony over the accused, the Jew seldom got off easy (or alive). One story goes that once when Jews were burying pieces of a desecrated host in a meadow, the pieces transformed into butterflies, which quickly set about healing cripples and the blind. Another tells that when Jews were burning the host in an oven, angels and doves shot out—a nearby heard of grazing oxen bowed their heads.

Eventually, after the Protestant Reformation in the early 16th century, the accusations died down. That’s not to say they’ve disappeared entirely, though, as this 2008 Minnesota incident revealed.