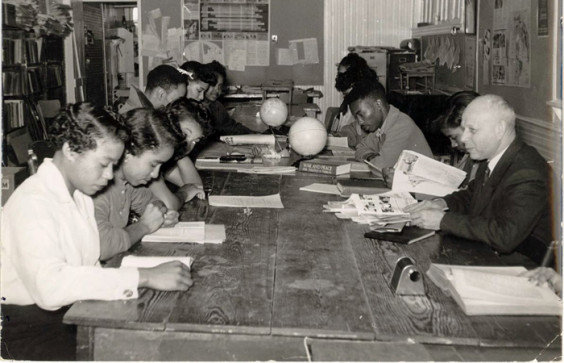 As Nazism swept Germany in the 1930s, Jewish intellectuals fled to the United States, seeking new opportunities. Instead, they discovered closed doors at many American colleges, where anti-Semitism was rampant.

Fortunately, these refugee scholars were warmly welcomed elsewhere: at historically black colleges in the Jim Crow South. It was a natural pairing. Jewish professors and black students both faced prejudice and persecution. Over time, the bonds between them grew. Professors such as Ernst Borinski at Tougaloo College (pictured here), Ernst Manasse at North Carolina Central University, and Viktor Lowenfeld at Hampton Institute cast their lots with their black students and colleagues, and rebuilt their lives in their world.

Recently, this obscure slice of history has found new audiences, in  traveling museum exhibitions, celebrated plays, and scholarly symposia that explore the subject.

The history of blacks and Jews in America is complex, and hasn’t always been easy, but the history of cooperation and respect between the two peoples— especially in the 1930s and 1960s—should not be overlooked.

The Maccabeats Jam With Obama
Hanukkah, Chanukah–Pass the Beer
Meet the Bal Ej, Ethiopia’s Other Jews