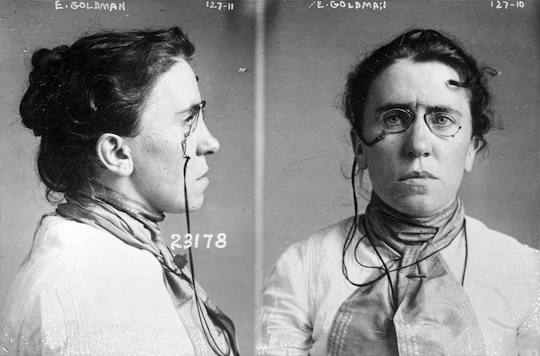 Honor Emma Goldman and the 75th anniversary of her death the 21st-century way: by watching a documentary about her on YouTube.

Through a combination of archival photographs, letters, journals, and reenactments, director Mel Bucklin’s 90-minute film, Emma Goldman, flashes back to Goldman’s childhood but focuses on her most productive years, when she lived in the U.S. It includes commentary from historians and writers like Tony Kushner and E.L. Doctorow, who tease out the roots of Goldman’s anarchism in the “radical Jewish humanism” that flourished in 19-century Europe. Dramatically, the film opens in 1919 with the anarchist being deported to her native Russia.

Over three decades earlier, we learn, a 16-year-old Goldman arrived in 1885 New York City alone. She eventually found her political home at a Lower East Side café called Sach’s, where politicized new immigrants gathered after work. She crusaded against big business, capitalism and war and advocated sexual freedom and the right to birth control. Some called her “an exceedingly dangerous woman.” She was deported in 1919, and died on May 14, 1940 in Toronto.