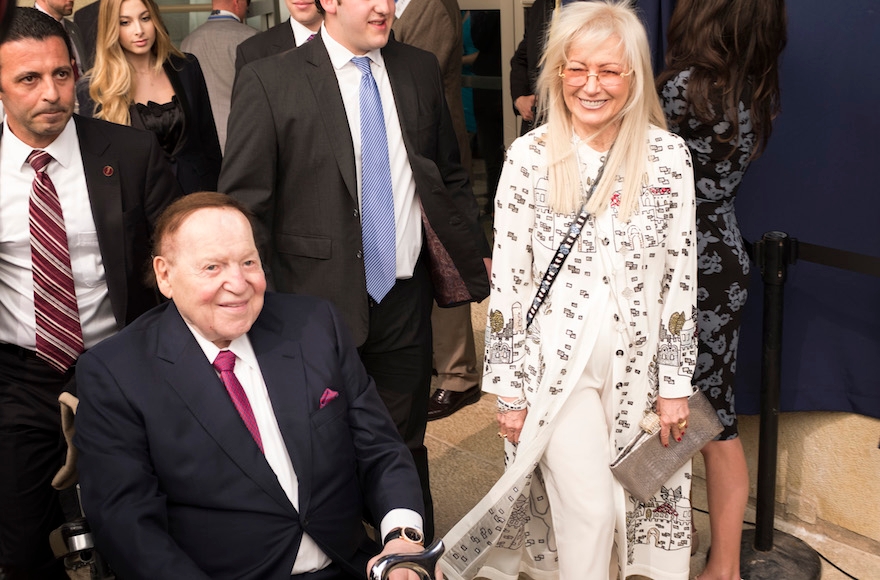 The Guardian on Monday quoted three Republican fundraisers it did not name as saying that the couple, known for their generosity to Republicans, pro-Israel causes and medical research, was ready to spend nearly the same amount, $124 million, as they did in the 2016 cycle. One of the Guardian’s sources said it could reach $200 million.

Sheldon Adelson is a casino magnate and Miriam Adelson is a physician and medical researcher. The Guardian said most of the money would be funneled through political action committees and “dark money” groups that are not required to reveal donors.

The Adelsons did not favor Trump in the 2016 cycle until May of that year, something he has teased the couple about now that they are close. A number of Republican Jews were wary of Trump at first because of a confrontation between the candidate and the Republican Jewish Coalition in December 2015, and because he originally would not commit to moving the embassy to Jerusalem.

As president, however, Trump has delivered on Israel-related issues favored by the Adelsons to a greater degree than any of his White House predecessors. He has moved the embassy to Jerusalem, cut virtually all funding to the Palestinians, recognized Israel’s sovereignty over the Golan Heights, pulled out of the Iran nuclear deal and advanced a peace plan that would allow Israel to annex nearly a third of the West Bank.

Trump awarded Miriam Adelson the Presidential Medal of Freedom in 2018.