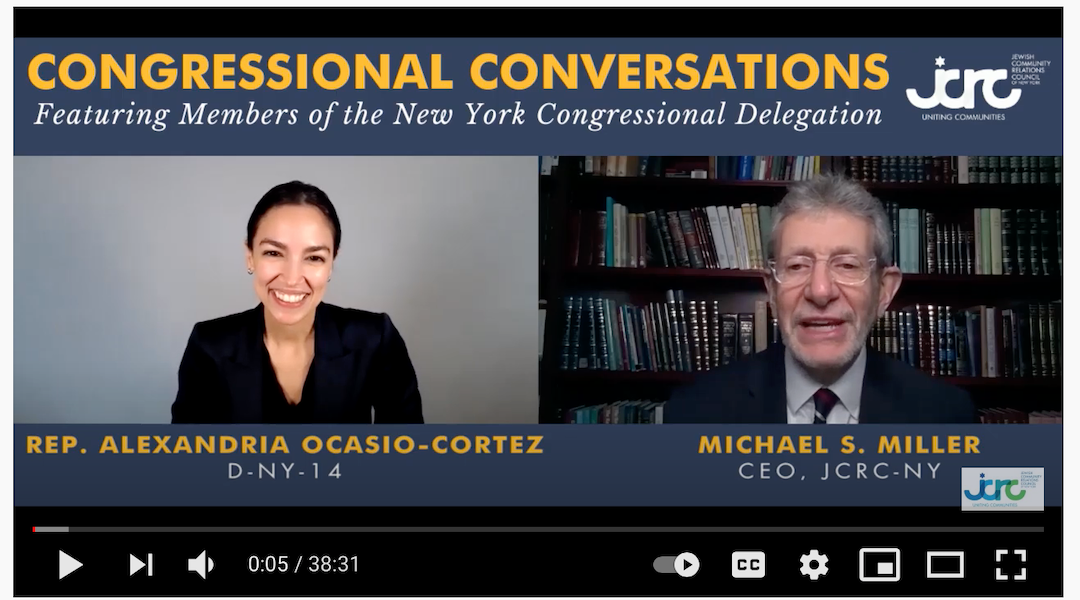 (JTA) — Rep. Alexandria Ocasio-Cortez sat down for a public interview with a top New York City Jewish group, ending what some had considered a snub of Jewish leadership since the progressive New York Democrat’s election in 2019.

In her April 1 talk with Michael Miller, head of the Jewish Community Relations Council of New York, Ocasio-Cortez acknowledged that she hadn’t engaged with national and citywide Jewish groups, saying “I was really focused on our backyard.”

But she did say she worked on projects with local Jewish groups, including community centers in her Bronx and Queens district, as well as J Street, the liberal Mideast policy group.

Ocasio-Cortez also said she objected to the detention of minors. She has praised Rep. Betty McCollum, D-Minn., for legislation that would withhold funding from Israel over its detention of Palestinian children.

Miller’s group and the New York Board of Rabbis, representing the pro-Israel mainstream, had complained that Ocasio-Cortez had not met with them after her surprise victory. Concern intensified after she pulled out of an Americans for Peace Now memorial for slain Israeli Prime Minister Yitzhak Rabin after saying she consulted with far-left Jewish groups.

“We still want to continue to engage,” Miller told Jewish Insider after last week’s conversation. “From my perspective, this was an opening.”

The video is available here.